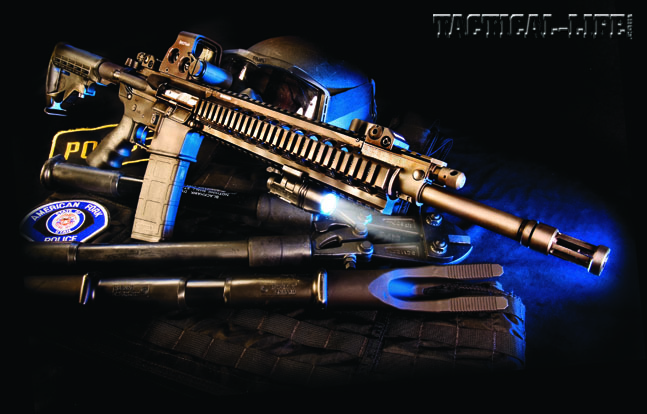 1 of 6
Ruger’s SR-556 | Gun Review 1
Ruger’s SR-556 line of rifles is rugged, reliable, cost-effective and well-suited to just about any tactical and law enforcement need. 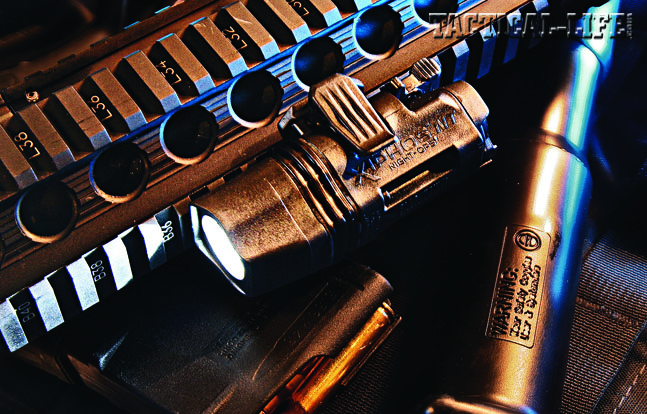 2 of 6
Ruger’s SR-556 | Gun Review 2
Ruger’s SR-556 has plenty of Picatinny rail space to mount optics or weapon lights, or move the adjustable Troy BattleSights, some of the fastest out there for target acquisition, to a preferred location. The rifle’s forend also shows the adjustable gas system that helps the action digest just about any ammunition. 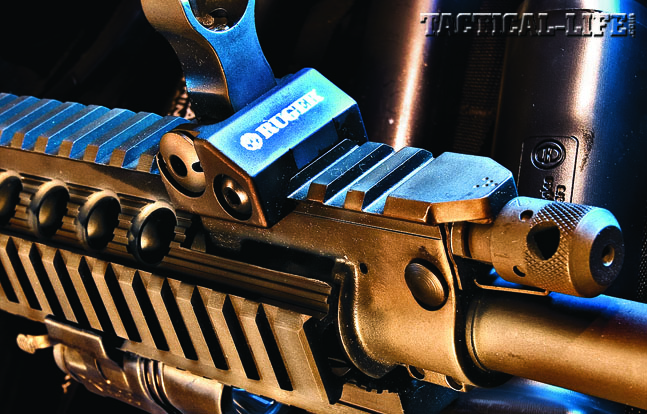 3 of 6
Ruger’s SR-556 | Gun Review 3
Ruger’s SR-556 has plenty of Picatinny rail space to mount optics or weapon lights, or move the adjustable Troy BattleSights, some of the fastest out there for target acquisition, to a preferred location. The rifle’s forend also shows the adjustable gas system that helps the action digest just about any ammunition. 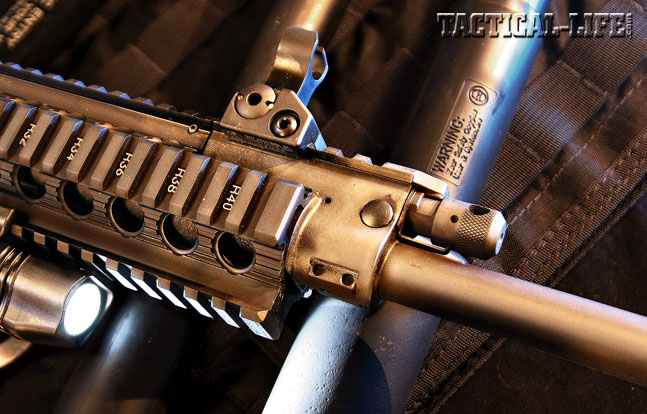 4 of 6
Ruger’s SR-556 | Gun Review 4
Ruger’s SR-556 has plenty of Picatinny rail space to mount optics or weapon lights, or move the adjustable Troy BattleSights, some of the fastest out there for target acquisition, to a preferred location. The rifle’s forend also shows the adjustable gas system that helps the action digest just about any ammunition. 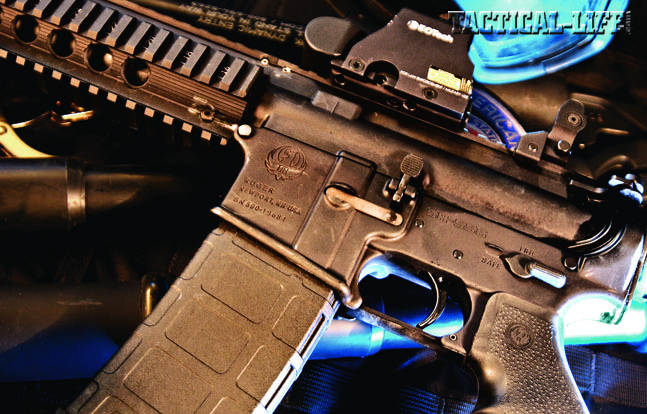 5 of 6
Ruger’s SR-556 | Gun Review 5
The trigger is an excellent tactical model—crisp, clean and very predictable—making it perfect for battle or duty work on the streets. 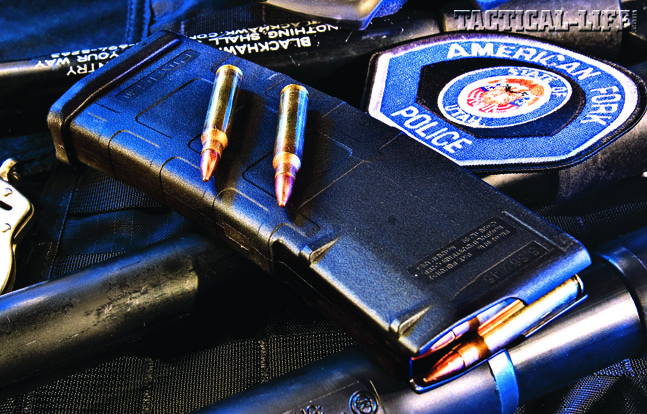 6 of 6
Ruger’s SR-556 | Gun Review 6
With the three provided Magul PMAGs, the Ruger SR-556 is ready to go to work right out of the box. Ruger has truly thought of everything. 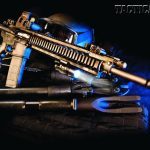 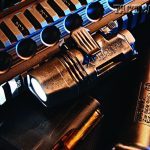 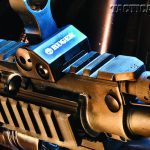 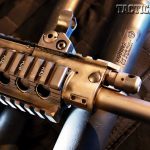 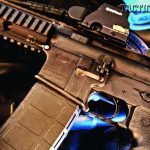 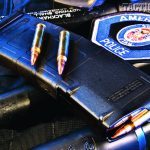 Over the course of the last year, the clamoring for the piston-driven AR-type rifle has settled a bit. For a while, a new wonder AR was introduced every week. By the time many came in to test, three had come out that were “new and improved.” Like most things in this market, time tends to balance things out a bit. There are really only so many ways to make this gun.

Time also pointed out that reality simply did not live up to all the hype. Just because it was a piston gun that did not mean it worked necessarily, let alone performed any better than your standard AR. And higher price tags do not always mean better rifles. Unfortunately, attaching “tactical” to anything also attaches a higher price tag.

Over the last year or so, the pretenders and the contenders have sorted themselves out. One of the best contenders to hit the market has been the Ruger SR-556.

Ruger is best known for two things in the gun industry: reliability and affordability. Their guns work—often at hundreds less than the competition. It was something the tactical world really needed, especially when the latest fad would drive prices higher and higher. The Ruger philosophy has really come through.

Although everyone seems to be making an AR, it just did not seem to be something that went with the Ruger name. This was especially true with the piston-driven guns. They were all kind of expensive and not always that reliable. But, If Ruger was going to make one, it would likely work and be priced so more people could afford them. Maybe there was hope for the average police officer who wanted a piston-driven gun, or the recreational shooter who just wanted to enjoy it. Although there are certainly companies out there making piston-driven guns that work, they are often anything but affordable. Most people just don’t have $2,400 for a rifle, and that does not always include more than a cardboard box and a magazine.

People really needed a rifle that came with everything necessary to go to work as a police officer or to the range for some target shooting. With a retail price at $1,995, Ruger has really hit a homerun here. To top it off, it comes with just about everything you need, all for about as much as you pay for some guns alone.

SR-556FB Details
This package comes with several key components. The rifle is equipped with three Magpul PMAGs. Not only are these fantastic magazines that have proven reliability, but there are enough to go immediately to work. Ruger’s SR-556FB has a nice six-position stock and a Hogue grip. The handguard is a quad-rail design and comes with three very nice rail covers. It is mated very nicely to the receiver, allowing for the use of tactical optics. That handguard covers a two-stage adjustable gas system. The bolt and rifle bore are chrome-lined for reliability.

It comes with a top-end set of flip-up sights. Troy BattleSights are among the best you can get. They are fast, accurate and easy to pick up on the move. The Troy sights are some of the most rugged and well built on the market and Ruger’s addition is a nice touch.

The entire package comes in a nylon case that holds all of it in one spot. The case is a bit less rigid than most of the tactical cases, but it works just fine. The only thing really needed was a means to attach a sling. If there were a gripe, that would be it. I certainly recognize that slings are often a personal choice, making it difficult for manufacturers, but in this case there is simply no way to attach a sling to the front. Many use a single-point sling, but the rifle did not have a means to do that, either. Other than that, this package is far more complete than most and it includes some of the best stuff out there.

At The Range
An EOTech sighting system and a new Crimson Trace MFV-515 pistol grip laser were added for testing. This unit provides a green laser and a white light in a pistol grip that attaches to the handguard. It is kind of nice to get as many things as possible into one small package. This system allows you to use the white light and pistol grip as usual, and the laser when necessary. Once zeroed, it was dead-on and pretty fast.

In either case, this rifle easy to shoot. It is well-balanced and accurate. The recoil is near non-existent and fast doubles and triples were a cinch. Most of the target areas used were 3 inches or less, and it stayed in this small space time and time again. The trigger is excellent and predictable. Shooting on the move was very easy, making it fit into the police world very well.

The rest of the shooting was done with the EOTech and iron sights. Again, accuracy was excellent, allowing me to shoot everything aimed at. There is no recoil to speak of and muzzle rise is held to a minimum. The longer handguard lent itself well to varying positions and allowed for solid control. When it was all said and done and the range time was over, the idea that the barrel may be heavy simply never entered my mind. It went completely unnoticed as compared to any of the myriad of AR rifles I’ve tested lately.

As to reliability, as expected, it was flawless. The truth is that most of these rifles are, but the magazines contributed to the difference here. Thanks to Ruger’s decision to use a tried-and-true format, there were zero magazine issues. Several other Mil-Spec magazines were used, too, including some new EDM magazines. These offer a “countdown feature” at the bottom rear of the magazine. As you fire, a little dial counts down your ammo. It changes colors from green to yellow to red for every 10 rounds fired. The dial can be seen without removing the magazine or counting through the window. These magazines worked through a couple hundred rounds and never miscounted. Time will tell, but at first glance, these are slick. They are polymer and seem as rugged as the best of them.

Final Thoughts
The typical complaint about this rifle is the weight. More specifically, it tends to be barrel-heavy. That was certainly true as it was removed from the box and shouldered, and pretty much everyone who handled it said the same thing. But on the range, that did not really seem to be an issue for me. If you tend to attach a ton of stuff to your forend, that may be an issue. The longer I do this the more of a minimalist I become, so it is seldom an issue. Given a long day, especially in a full kit, it may be a problem. For most, especially if you are spending quality time at the target range, this should not be a real issue.

The muzzle brake/flash hider is the same as seen on the Mini-14 for years and works just fine. For many, a more mainstream unit may be desired, but it really depends on what you are using it for. The only other thing that would be nice is a means to attach even a simple sling to the front of the rifle. Other than that, it was an excellent rifle.

The rifle tested was the SR-556FB, but many more choices are available these days, too, and even a 6.8 SPC version. Ruger also has an SC model legal for sale in NY, NJ, CT (and some cities in OH). Ruger has really done a fantastic job here, so if you are looking for an affordable piston-driven AR, consider the SR-556. 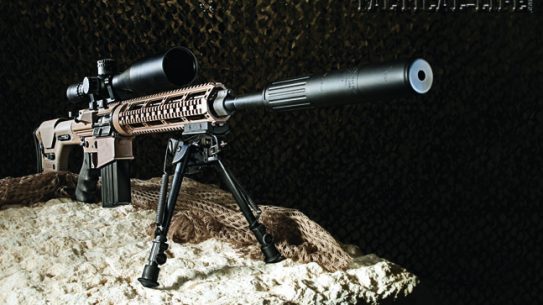 This DPMS 7.62mm black cat won’t let you down and has accuracy to spare!