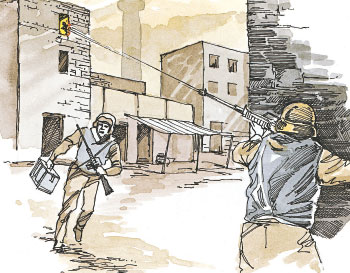 First arriving in Camp Victory in March 2007, Staff Sgt. Jacob Jones was performing duties as an operations chief, arranging transportation for transition-team members and Iraqi advisors. The Marine refers to his billet as a “glorified paper pusher.”

DAY 1: A local police building in Baqubah served as the hub for a Provincial Joint-Security Coordination Center between local police, fire and EMS. He checked the machine-gun posts on the Center’s rooftop on the morning of May 4 before heading to Lt. Col. Small’s office for a situation report. “As soon as I sat down in the office and I started talking to him, letting him know everything was secure… we started taking rounds.” Jones grabbed a bandolier of 5.56 NATO ammo, his M4 and M9 before running to the front of the building. “When I got there, there were a bunch of women and children that were trying to meet with police and the insurgents were shooting at the women and children that were standing at the front door.”

Iraqi police told Jones about sniper fire from a nearby window. He peeked and identified the sniper’s hide. “I moved into a firing position in the front doorway and… I unleashed the fury, man. I let loose with that M4.” After an exchange of fire, Small linked up with Jones and took a knee before joining in. Low on ammo, “Jones immediately took it upon himself to retrieve ammo from a nearby outpost,” said Small. “It was only about 50 meters, but to get there he had to expose himself to enemy fire.” Jones returned with ammo, and another insurgent joined the sniper. Small and Jones killed both shooters.

DAY 2: “The next day we started taking more fire out of there.” Jones took the initiative to end the problem with an AT-4 rocket launcher. He took position on the roof of the Center and gained sight picture on the insurgent’s building. A U.S. Army captain prevented the moment from continuing by identifying a friendly patrol nearby. “Get your men out of the racks, right now,” Jones instructed the captain. “Mount them up. Get them into a stack next to the building. We’re going to raid this block.” Jones took charge and was using the Iraqi police to clear buildings while proceeding under fire down the block. Reaching the tower that had been used by the insurgent sniper the day before, they cleared floor-by-floor.

Lt. Col. Small noted, “By the example Jones set that day, he boosted the morale of the whole headquarters and proved to Iraqi police we were ready to fight by them. All I can say is he really turned things around.”