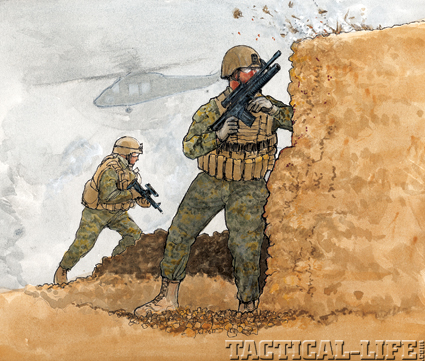 While following the directions of the helicopters, Cpl. Meyer ran towards the location where the members of ETT-28 were trapped.Illustrations By Ken MacSwan.

Kunar Province, Afghanistan, near the village of Ganjigal, is a remote and Taliban-held part of Afghanistan that has proven difficult for coalition troops to crack. The area has steep ravines, sweeping tree-studded mountains full of boulders and caves—the perfect terrain for an ambush. The area is full of ethnic Pashtuns who do not like foreigners and have a history of resistance—just ask the Russians. 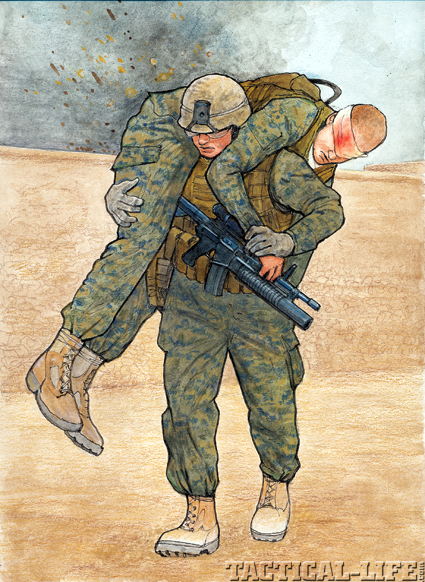 Cpl. Meyer is credited with helping to evacuate 13 Marines and U.S. Soldiers and 23 Afghan soldiers during five runs into the kill zone.

On September 9, 2009, 60 Afghan soldiers, 20 Afghan borders guards and 13 U.S. Marine and Army trainers set out at 0300 hours from their base in Shakani District to Ganjgal to search for weapons and hold a meeting with village elders to discuss the establishments of police patrols. They were part of Marine Embedded Training Team 2-8.

The unit headed there because the local elders declared their loyalty to the government and asked for the meeting. The village elders had insisted that the Afghan’s perform the security patrols.

The pre-mission intelligence revealed that the local Taliban would try to ambush the unit. Intelligence estimates showed approximately 20 fighters in the area. The pre-brief also indicated that due to a new ROE, artillery support would only be provided if it didn’t jeopardize civilians or the village, and air cover would not directly support this mission but could be pulled off an adjacent mission if needed. Whether out of naivety or design, the village elders had given the Taliban the day and time frame of the Coalition force meeting with their announcement of accepting the government’s authority. Despite this SITREP, the Coalition Forces felt obligated to make the meeting and deal with any ambush, due to the village elder’s announcement.

At dawn, the column of Afghan and U.S. troops arrived outside the valley that led to the village. The march was a kilometer long to a village made of 60 rock-walled compounds perched on the slopes of the valley, only 6 miles from the Pakistani border, an area heavy with insurgent activity.

Prior to the march, U.S. military observer posts were set up on the northern and southern sides of the valley in order to watch for insurgent activity. At one of those outposts, U.S. Marine Corporal Dakota Meyer assumed his position. After action reports indicate that as the Coalition column approached the area, the village’s lights suddenly went out, foreshadowing what was about to happen.

At 0530 hours, the first rounds rained down as the Marines and Afghan security forces approached the village. As time ticked away, the rounds started pouring in heavier and heavier onto the U.S. and Afghan security force. The intelligence estimate of 20 Taliban fighters quickly became over 150, all perched on the valley walls above the Coalition forces with direct lines of fire.

As the firefight intensified, U.S. Marine 1st Lt. Michael Johnson, Marine Gunnery Sgt. Edwin Johnson, Marine Staff Sgt. Aaron Kenefick and U.S. Navy Hospital Corpsman 3rd Class James Layton, who were at the head of the column, hardened up in a house in the village. While hunkered down, they attempted to call for artillery and/or air support from Forward Operating Base Joyce and were denied.

As the situation deteriorated, the calls for help become more dire. Cpl. Dakota Meyer lost his patience after two hours of listening to the firefight intensify while his calls for assistance went completely unanswered. Had the artillery and/or air cover been made available, the firefight may have been over. Without those, the Taliban retained the advantage with their elevated and entrenched positions and continued to pour heavy and withering fire down on the U.S. and Afghan troops.

Meyer had been instructed to remain at his post. Now the forward element was pinnned down in their position and the enemy had encircled them and could be overrun. As casualties mounted, the forward element remained pinned down without support for two hours. After listening to 1st. Lt. Johnson yell over the radio, “If you don’t give me this air support, we are going to die out here,” Cpl. Meyer requested permission to enter the kill zone but was denied the four times he asked.

After the fourth denial, he took it upon himself to leave his safe location and he mounted a Humvee with Marine Staff Sgt. Rodriguez-Chavez as the driver. Dakota later said he “got in a zone” and was determined to help rescue the trapped Marines. The young Corporal and Staff Sgt. Juan Rodriguez Chavez headed into the kill zone.

As they ran the gauntlet, Dakota became an open target for the Taliban and began feeling rounds whizzing by him and impacting close. During an interview, Dakota said the Taliban got as close as “15 to 20 yards” while firing at him. The Marine returned fire and poured as many rounds on different targets as he could.

As contact with the forward element was lost, Meyer and Rodriguez-Chavez continued into the ‘kill zone’ without fire support in order to aid the wounded U.S. and Afghan forces. The two Marines became the targets of which the enemy poured heavy fire from machine guns, small arms, mortars and RPGs.

Without hesitation, Meyer and Rodriguez-Chavez evacuated wounded, provided essential aid and recovered bodies of the joint operation unit, taking them back to the casualty collection point (CCP), then headed back into the kill zone four more times, still in search of the forward element.

According to the Marine Corps, “Upon reentry, Rodriguez-Chavez warned Meyer that they may get stuck in the rough terrain ahead. In spite of this risk, Meyer remained steadfast, remarking, ‘I guess we’ll die with them.’” As forward movement resumed, the two continued to be the target of attack by the enemy. Rodriguez-Chavez maneuvered the Humvee while Meyer staved off the enemy with effective fire atop the turret. An artillery malfunction forced the two Marines to return to the ORP to swap vehicles for a working heavy machine gun.

Along the route back, more wounded were discovered, retrieved and transported to safety. In the course of the exchange, Meyer sustained a laceration to his arm from RPG and mortar fire, but it would not stop him from charging on.

Still in search of his ETT, Meyer led a fifth and final charge back into the kill zone accompanied by Marine 1st. Lt. Ademola Fabayo and Army Capt. William Swenson. Air support finally came hours into the firefight in the form of a UH-60 helicopter providing much needed cover.

The pararescuemen aboard the helicopter informed Meyer that they had spotted what appeared to be four bodies. Meyer dismounted the Humvee and ran to the identified location. Even with the helicopter keeping an eye on him from above, Meyer was in a riskier position now than he would have been if he had stayed close to the vehicles with other members of his group. He was out in front of the group, moving near buildings and terrain and drawing a high volume of enemy fire. Meyer, disregarding continuing small arms and RPG mortar machine gun fire, followed the directions of the helicopter until he came upon the four lifeless bodies of the four missing Marine advisors— his ETT. Moving out of the ditch, across the danger zone, he transported the bodies with the assistance of Swenson and the ABP commander.”

When Meyer entered the area of the four bodies, he found them all dead, stripped of their gear and uniforms. Sgt. Meyer has stated that this was an enormous disappointment in that, despite his efforts, he could not get his fellow Marines out alive.

“After a six-hour firefight, without regard for his own personal safety, Dakota Meyer entered the kill zone five separate times to evacuate the wounded, provide essential aid and, ultimately, save the lives of 13 U.S. Marines and soldiers and 23 Afghan soldiers. Meyer personally killed at least eight Taliban insurgents while providing cover for his team to fight their way out and escape certain death.”

After his valiant effort, Sgt. Dakota Meyer does not consider himself a hero. “The heroes are the men and women still serving,” he has said.

“For his actions on Sept. 8, 2009, his selfless valor that day, in keeping with the highest traditions of the Marine Corps and the United States Naval Services, Sgt. Dakota L. Meyer has earned the distinguished recognition of being awarded the Medal of Honor, the first to a living Marine since Vietnam.” 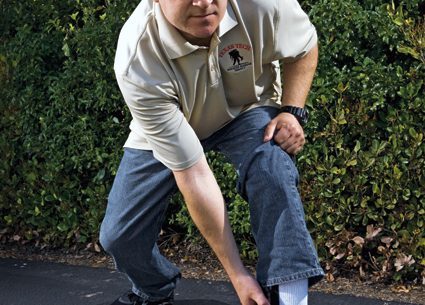 While following the directions of the helicopters, Cpl. Meyer ran towards the location where…