With a relative external similarity to the AK-47 design, the Snayperskaya Vintovka Dragunova (SVD) was the sniper rifle of choice for Soviet missions and remains a favorite among many former Eastern Bloc nations to this day.

If you say to a Vietnam vet who ran recon, “The $25,000 Bounty Rifle,” he’ll likely know you refer to the SVD or Dragunov, for that was the price that the Defense Intelligence Agency was offering for a captured sample of the then-new Soviet sniper rifle.

SVD stands for “Snayperskaya Vintovka Dragunova” which translates as Dragunov’s Sniper Rifle. It takes its name from Evgeny Dragunov who designed the rifle, which won the contest for a new Soviet sniper’s rifle.

Rifle Details
The SVD design bears some cosmetic resemblance to the AK-47, including the removable dust cover, ladder iron sights, safety, and magazine release lever. Its receiver is machined, which gives greater rigidity for greater accuracy. Even though the SVD is a gas operated, self-loading rifle, the rotating bolt design handles the 7.62x54R cartridge quite well. The barrel is 24.4 inches long on the original SVD, of which 21.5 inches is rifled — the rest being flash suppressor. Unlike most sniper rifles, the SVD has a bayonet lug, and some former Spetsnaz snipers found that harmonics are better with the bayonet affixed. I gather this was especially true with the 7N1 sniper round, used until it was replaced by the 7N14 round in 1999.

The SVD’s 10-round detachable, double-column box magazine and self-loading action grant it tactical versatility. Spetsnaz snipers with SVDs saved many children’s lives during the Beslan School incident by delivering fast, sustained fire at terrorists who were shooting at fleeing children.The PSO-1 4x scope isn’t the greatest long-range scope, but does well in engaging multiple targets quickly. A standard-issue, four-magazine pouch gives the sniper 50 ready rounds as a basic combat load. The side rail mount allows quick installation of other optics, including 6x scopes or night vision optics. 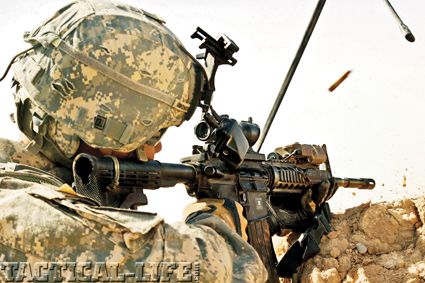