The FSB, which from Russian translates to Federal Security Service, is the successor agency to the KGB. Among its responsibilities is anti-terrorism; assigned units are designated Alpha and Vympel. Both units fall under the authority of TsSN FSB (The FSB Special Operations Center). For most operations, Alpha is the lead unit, though Vympel does have some specialties for which they might take the lead on a given operation. Both are trained as what is known as OSNAZ (special-purpose forces), which are basically KGB and later FSB special forces. 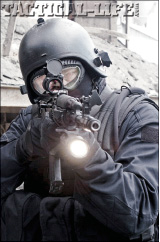 History & Dynamics
Alpha was initially created in July 1974, as part of a response to the 1972 Munich Olympic Massacre. The same impetus was the basis for the formation of many Western anti-terrorist units. Although initially intended to deal with hostage incidents and aircraft hijackings, Alpha’s responsibilities would expand. To give an analogy, Alpha was originally formed with responsibilities akin to the FBI HRT (Hostage Rescue Team), but would evolve to include those of the Delta Force, now known as the Combat Applications Group.

Although Alpha did carry out some hostage rescue missions during its first few years including some assaults on hijacked aircraft, the operation that drew the attention of the world to Alpha occurred on December 27, 1979. Alpha operators spearheaded the assault on the Afghan Presidential Palace killing Hafizullah Amin and most of his Presidential Guards. As long as the Soviet Union remained in Afghanistan, Alpha operators carried out clandestine operations within that country.