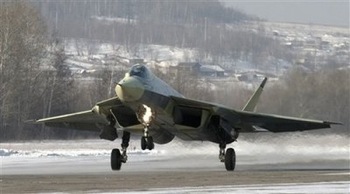 The Sukhoi T-50’s flight comes nearly two decades after the first prototype of the U.S. F-22 Raptor took to the air, and Russian officials said it will take another five years for the new jet to enter service. Still, the flight marked a major step in Russia’s efforts to burnish the faded glory of its aviation industries and strengthen a beleaguered military.

The sleek twin-engined jet closely resembling the Raptor flew for 47-minutes from an airfield at Sukhoi’s production plant in the Far Eastern city of Komsomolsk-on-Amur on Friday. Development of the so-called fifth-generation fighter has been veiled in secrecy and no images of it had been released before the flight.

Russian Prime Minister Vladimir Putin hailed the flight as a “big step forward,” but admitted that “a lot remains to be done in terms of engines and armament.”

“The T-50 should offer the Russian Air Force a significant boost in its capabilities and ensure that it remains one of the best equipped air forces in the world,” he told The Associated Press by e-mail.

Caffrey said the new fighter will attract many foreign customers. “For those countries that don’t traditionally purchase military equipment from the U.S. it will be the only fifth generation aircraft available,” he said.

Read more of the AP story at Yahoo! News. 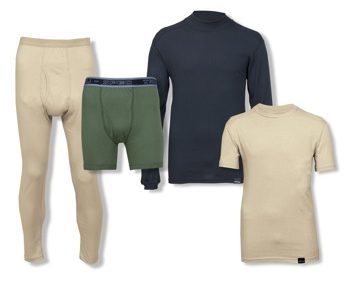 Tru-Spec no melt, no drip, no sweat Cordura baselayer undergarments