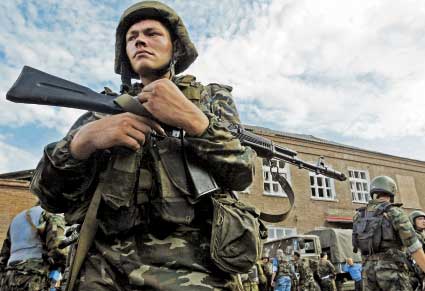 The opening day of school in Russia has a picnic atmosphere, an indication of the importance that Russians attach to education. The first day of September in 2004 was a gala opening day in Beslan, Russia, but a day that would be shattered by a heinous act of terrorism. Slightly less than 1,000 students were at the school along with thousands of parents and grandparents, many there to see a beloved child off to their first day of school. 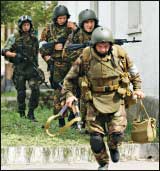 Russian intelligence services had some indicators that Chechen terrorists might target a school, but since schools were opening all over the country, they could not secure every one. At the one in Beslan, there was a lone security man armed with a Makarov pistol. A number of terrorists were already in place in Beslan, mixed with the crowd. Others infiltrated across the border by posing as smugglers and bribing Russian border guards. There is still some confusion about the total number of terrorists involved in the school takeover at Beslan, but a number around 50 is usually cited.

Day 1: Around 8:45 a.m., over three dozen terrorists leapt from vehicles and quickly surrounded a large portion of the crowd of children and relatives. Other terrorists in the crowd helped subdue the hostages as well. One group entered the school and began clearing it by herding everyone they encountered into the gym. The lone security guard and local police officer who happened to be in the crowd attempted to engage the terrorists with their pistols and managed to kill one before they were cut down in a hail of automatic fire. In the confusion, many in the crowd managed to escape, but most were taken hostage and herded inside. The terrorists left no doubt that they would deal with the hostages ruthlessly, executing two fathers in the crowd. Although statistics related to Beslan are sometimes contradictory, the number of hostages most often cited is 1,181.

Premeditated Siege
The terrorists had studied where their comrades had gone wrong during the incident at the Nord Ost Theater in Moscow. Once being herded into the school, all cell phones were collected and explosives were set around the gym and at entrances to the building. Some of these devices were designed as “dead man’s switches,” intended to detonate if the terrorist were shot and fell off. To prevent infiltration by operators or the placement of surveillance devices, holes were blown in the floor in various part of the building. Older boys and men were used to help move heavy equipment to form barricades. Once their usefulness was over they were executed as examples and to eliminate them as possible threats.

Hostages were not allowed to use the toilet or get drinks of water. In some cases, they put bottles of water in front of parched children and told them they would be killed if they reached for the bottles. As the siege progressed, some would drink their own urine.

One of the first pieces of intelligence received was a video of the scene in the gym, which the terrorists had thrown out about 12:30. They had supplied a cell number at which they could be contacted for negotiations. Their first demand was the release of 30 Chechen and Irgush terrorists held by the Russians. Aware of Russian snipers in place, the terrorists threatened to kill 50 hostages for each of them killed and 20 hostages for each of them wounded. If the electricity or phone lines were cut, they would begin to execute hostages. Aware that Russian authorities sometimes bring relatives of terrorists to the scene, the terrorists informed negotiators that they would kill hostages if any were brought in. No food or water would be brought in for fear that it might be drugged. Just before midnight, portions of the Moscow Alpha and Vympel detachments arrived to begin planning for a takedown. It wasn’t expected that Chechen terrorists were going to be negotiated out. During the night of the first day, the bodies of 21 hostages executed by the terrorists were thrown from windows. Aware of tactics previously used against other terrorists, windows had been broken out around the school to make the insertion of gas less effective. Around 3:00 a.m., the terrorists asked for President Putin’s special advisor on Chechnya to be brought in as a negotiator.

Day 2:  The terrorists did release 32 hostages when allowed to talk with an official they had requested. Although President Putin took a hard line against negotiating with terrorists, he did give negotiators permission to offer free passage to Chechnya if the terrorists would release all hostages. Since more than 50 hostages had already been killed this was quite a concession. The terrorists responded with a demand for the removal of all Russian troops from Chechnya and recognition of its independence. These demands were so unreasonable that negotiators realized there was little chance of a negotiated settlement.

Alpha and Vympel had managed to develop a “Go” plan, but the massive number of hostages, lack of intelligence and large number of terrorists dictated that the plan was going to be very basic. It required every operator on the scene, but it was impossible to keep them in the alert. The rescue plan developed and it was crucial to practice it.

Alpha and Vympel operators began practicing on a building 30 klicks away from the scene. Teams alternated on perimeter security and rehearsing the assault, but distances made handovers much more time consuming than they would have been with a closer practice venue. Because of the anticipated effects of malnutrition, dehydration, and lack of medication for some hostages, the decision was made that an assault would have to be launched on the fourth day. Alpha SOP was to assault very early in the morning when terrorists would likely be most lethargic.

Day 3: The large crowd of unruly, drunk­­­­­en residents remained a huge problem. It could compromise a plan requiring a stealth approach from the beginning. Based upon the relative success of the use of gas at the Nord Ost Theater incident in Moscow, Alpha did contemplate using it again. There would have been far more problems inserting enough gas into the school to neutralize the terrorists without killing a massive number of children. Terrorists had planned for a gas attack by bringing their own gas masks and breaking as many windows as possible for ventilation. The terrorists shot randomly into the crowd. Because of the smell of the decomposing bodies, around 1:00 p.m., the terrorists did agree to let teams approach to remove the bodies. As the emergency service workers began loading the bodies, explosions were heard from within the school. Some hostages were actually blown through windows and others jumped. Information gained from hostages after the incident had ended seems to indicate that the initial explosions were accidental, likely because of the terrorist’s haphazard wiring of the devices. As soon as those hostages who were able to move attempted to escape, terrorists began firing at them and at the rescue workers. Responding to this threat, Alpha and Spetsnaz snipers began taking out any terrorist target that they could acquire.

Frontal Assault
Initially, the Vympel operators were held up by explosives on the doors. Finally, they had an APC blow a hole through the door and began entering the school. There was a chance of injuring hostages by blowing their way in, but there was a far greater chance of hostages dying if the operators did not get in and start engaging the terrorists. SOP would be to carry out entry from multiple points, but the Vympel and Alpha operators could not enter from some points due to gunfire from the crowd. In some cases, Vympel operators placed themselves as human shields between the fleeing children and the terrorists, many taking hits in the process.

In the background, more explosions could be heard as more of the roof was blown down. To give some cover to the escaping hostages and the assault team, two BR80 APCs were pulled between them and the terrorist’s firing positions. This, no doubt, saved a substantial number of lives.

As teams finally began clearing the building, they found that many of the terrorists had retreated to the shop area, which they had barricaded with heavy machinery for cover. Some operators engaged them while other teams moved to assault the cafeteria. It was apparent, however, that even with 300 trained Vympel and Alpha operators on the scene, they would have difficulty clearing such a large building with terrorists scattered throughout. Before the cafeteria was eventually secured, it would take hours of bloody fighting.

Terrorists and hostages remained on the 2nd floor. Operators then had to secure the staircases and begin clearing the classrooms on the second floor. The operators sweeping the upstairs hall and classrooms  encountered terrorists who used children as shields and crouched behind barricades. As the terrorists were forced back down the hall, they detonated antipersonnel bombs. One group of terrorists on the top floor even rained fire with a PKM machine-gun. During this clearing operation, combat was often at ranges of less than six feet. As the operators moved down the hallway, their objective was to push the terrorists towards the other staircases. Members of the crowd began to flood the building, allowing terrorists to mix with them and caused all operators to doubt the security of their rear. They had mostly cleared the building more less than three hours after the slaughter began. Still, four terrorists exited the building amidst children, attempting to use them as hostages. Two Alpha operators managed to move between the terrorists and the children, killing all four of them but losi their lives in the process.

Closing the Noose
With most of the building cleared, attention could be turned to terrorists barricaded in the shop. Since they did not have hostages, RPGs and RPOs (93mm rocket launchers) were used against them without mercy.

The generally accepted death toll among hostages at Beslan is 338, of which 172 were children. There were around 700 wounded and those traumatized are beyond count. Eleven Alpha and Vympel operators were killed along with 10 members of the OMON, Spetsnaz, and other units.  Some were killed from civilians firing from behind. Some terrorists escaped: 31 were killed in the assault or  torn to pieces by the crowd while trying to escape.