The sniping caliber of choice for many special operations units today has become .338 Lapua Mag. Incredibly accurate at ¼-MOA or better, sniping rifles in this caliber weigh only a pound or two more than .308 sniping rifles and allow special ops snipers to reach out to more than twice the distance and hit with substantially more power. Since special operators are normally tasked with acting as force multipliers, the advantages of the .338 round are highly valued. The availability of folding stocks for the two or three most popular special ops .338 Lapua rifles allows them be even more portable when deployed from helicopters, small boats, or by foot.

The most widely used .338 Lapua loads can push a 250-grain bullet 2,950 fps (feet per second) and produce 4,800 fpe (foot-pounds of energy). At 1,000 meters, a .338 Lapua bullet could still penetrate five layers of military body armor. Maximum effective range of the round is usually given at 1,750 meters, but it has been used at even greater ranges. Despite being a high-performance sniping cartridge, the .338 Lapua round does not actually cause as much barrel wear as some other cartridges — an important consideration in a sniping rifle, since good snipers practice a lot. 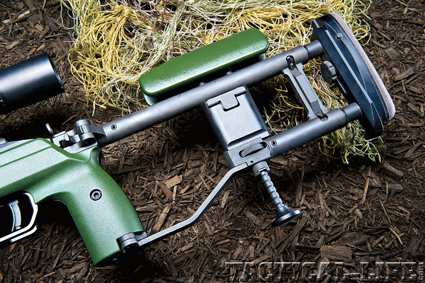 The buttstock is fully adjustable for cheek height, length of pull and pad position. It also contains an integral monopod to complete the support of the rifle for precision shot placement. A simple but rock-solid hinge system locks the folding stock into the extended or collapsed position.

I have now done a reasonable amount of shooting with the four .338 sniping rifles most widely used by special operators and like some aspects of each of them, But Sako’s TRG-42 is truly an outstanding rifle. Many anti-terrorist units around the world use it; among the countries that assign the TRG-42 to their special ops units as their .338 Lapua sniper rifle are Albania, Denmark, Finland, Estonia, Greece, Italy, Russia, Spain, Switzerland, and Turkey.

The .338 Lapua TRG-42 model tested is the OD (Olive Drab/ green), folding stock variant, which is the model used by most units. Black and OD/green fixed stocks are also available. The 27.13-inch tapered, target-grade, chrome moly barrel is cold hammer forged for toughness and accuracy. It has a black phosphate finish. The barrel is threaded for a muzzle brake. Note that the threaded barrel will also take a suppressor. Twist in .338 Lapua is 1-in-12 inches, a rate considered optimum for the 250-grain load used by most military snipers. Overall length with the stock deployed is 49.75 inches and with the stock folded 40.25 inches. Lengths are with muzzle brake installed. 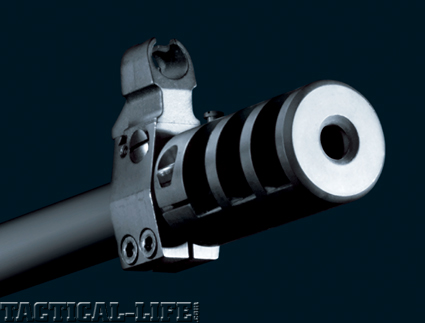 The aggressive muzzle brake helped to tame the felt recoil of the .338 Lapua Mag.

It weighs about 17.5 pounds with the scope and bipod attached, which keeps the TRG-42 portable enough that an operator can transport it into a shooting position quite readily. Note that in comparisons based on published weights for the fixed stock TRG-42, the folding stock version is actually heavier. Yet the TRG-42 is still a couple of pounds lighter than competitive .338 Lapua sniper rifles even with the folding stock.