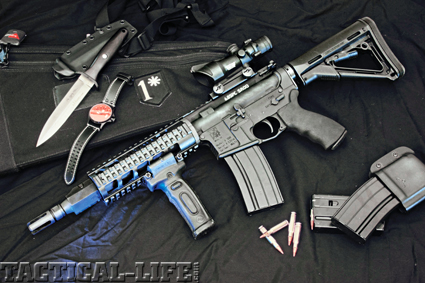 There can be little doubt that we’re living in the golden age of the AR-15. Thanks in large part to the sunset of the so-called Assault Weapons Ban, which removed the artificial restraints on development of the AR platform, there are now more AR’s available than ever before, and in a more dizzying array of configurations. Exotic calibers have become commonplace—from the big .50 caliber rounds to the .458, .450, and others. Meanwhile barrel lengths have both stretched to 24 inches or better and shrunk down as short as 6 inches. Recognizing how severely short barrels can curtail the performance of the .223, perhaps the best of the truncated breed are the rifles that combine a reasonably short barrel with a heavier caliber capable of retaining terminal performance. Into the mix of the AR world has come S.A.O.D. Hailing from the North Georgia area, “S.A.O.D.” stands for “Special Area of Demand,” and was founded by a longtime industry insider who has done outsourced research and development for many of the major firearms companies. These contacts have made it possible for S.A.O.D. to come out on the leading edge of AR technology—from progressive twist barrels to hyper-accurate .22 LR uppers, and short-barreled uppers that function without the need for a piston system.

This billet SBR lower from Sun Devil Manufacturing is assembled with mil-spec parts, with the exception of a Magpul triggerguard and buttstock, and ERGO grip.

While I’ve put a lot of rounds through S.A.O.D. uppers in various calibers, the one that I’ve been working with lately is a 10.5-inch model in 6.8mm SPC. Conceived as a way to get added performance from the M4 platform with only minimal modifications, the 6.8mm SPC is basically a shortened .270, firing a 110-grain bullet in the neighborhood of 2,550 feet per second (fps). 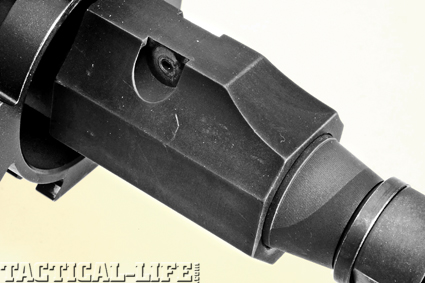 S.A.O.D.’s shorty 6.8mm SPC upper comes with the customary gas block, and uses a direct-impingement gas system, without the need for a piston system. While conventional wisdom suggests anything short should have a piston in it, this 10.5″ upper did not suffer from using the traditional arrangement.

Since the barrel length is only 10.5 inches, shorter than 16 inches—the minimum legal length for a rifle barrel—which means this upper can only be used (or even assembled) onto a registered pistol lower without a stock, or an AR lower that has been registered with the BATFE as a short-barreled rifle (SBR). For this article, I used the S.A.O.D. upper on my personal SBR, which has been duly registered.

S.A.O.D. offers high-end AR components for a variety of off-the-beaten-path applications—such as their 10.5"…