by Eve Flanigan
in Guns, Rifles
0

"The little steel plate rang out almost too easily, making it a thrill rather than a struggle to hit at such a long distance."

The 6.5 Creedmoor chambering has caused quite a stir among long-range shooters, and for good reason. Its ballistic performance is outstanding, and ammunition in this caliber is now widely available and affordable. Until recently, there was a dearth of tactical-style rifles in this caliber that wouldn’t break the bank. Ruger was the first to step up to the plate with its mass-market Precision rifle. Not far behind is Savage Arms. The company has released the 10 BA Stealth in both in .308 Winchester and 6.5 Creedmoor, and we tested the latter to see whether its performance matched its futuristic looks.

The 10 BA Stealth has a sleek design with everything you need and nothing you don’t. The skeletonized, monolithic aluminum chassis, made by Drake Associates, has a forend with ample room for mounting accessories thanks to its M-LOK slots. The fluted, free-floating barrel sports 5/8×24-tpi threading at the muzzle, and a knurled thread protector is included. The bolt has been blueprinted, and a cocking indicator is located at the rear.

Just behind the bolt is a three-position safety that is easy to reach without shifting your grip. The grip itself is a Hogue unit—a good accessory for handling and carrying this long and heavy rifle. The trigger is Savage’s renowned AccuTrigger, which features a safety block akin to many striker-fired pistols. This safety feature has a polished nickel finish—the only non-matte-black feature on the rifle. The AccuTrigger is a single-stage design, and our test rifle’s trigger had a pull weight of about 3 pounds, though the pull weight is adjustable.

A wide, flat, polygonal triggerguard adds to the gun’s space-age looks. It protects the trigger while being roomy enough for gloved fingers. Just ahead of the triggerguard is a paddle-style magazine release that can be used by either hand. The magazine well is designed to accept AICS magazines, and one 10-round polymer magazine from MDT was included with our rifle.

Atop the receiver is a one-piece EGW scope rail. Like most bolt-action rifles these days, there are no iron sights, and Bushnell loaned me its excellent first-focal-plane Elite Tactical LRS 6-24x50mm riflescope for the test. I used a set of high Weaver Tactical rings to mount the optic on the rifle.

Finally, at the tail end of the 10 BA Stealth is the FAB Defense GLR-Shock buttstock, an M4-style unit that is adjustable to six different length-of-pull positions. It comes with an aggressively textured shoulder pad for traction and a flush-cup sling attachment point. There is also a sling-mounting stud on the forend of the rifle, but we’ll get to that in a minute.

How The 10 BA Stealth Runs

The black-finished bolt on my test rifle, branded with the Savage name, functions well. The bolt handle is on the small side. I would prefer one a bit larger with more texturing than the narrow ring of knurling this one has. However, this is a personal preference that has little to do with the rifle’s functioning.

The magazines functioned really well. Every round fed without issue, across three brands of ammunition. Savage made a good decision in going with this MDT magazine. Though I was concerned at first with the durability of this polymer magazine and its follower, at $39 the magazine is less expensive than Savage Arms’ own steel box magazines. The magazine is also nicely textured to enhance your grip, but not so much as to become dirt collectors.

The trigger is, in my estimation, perfect for a precision rifle. It’s easy to disengage the trigger safety, and 3 pounds of pressure makes for an easy break on the factory setting. For hunting, it might be wise to adjust it to a heavier pull for safety’s sake. Serious match shooters might prefer to lighten it a bit. The nice thing is, the AccuTrigger gives the operator a choice.

The adjustable stock has hiking-boot-like traction. Whether that makes much difference in felt recoil is hard to tell, but it sure does look cool. It’s easy to adjust he length of pull with one hand, similar to the stocks on most ARs. But this stock also comes with a cheek riser that can be adjusted via a dial on each side, and it offers quite a range of heights for use with any optics.

I added a bipod, and as expected, there was some bounce when shooting off of hard surfaces. A quality muzzle brake might be a good add-on for those interested in getting back on target quickly.

We put the 10 BA Stealth in a bag-supported benchrest position for zeroing at 100 yards. Using 140-grain Federal American Eagle open-tip match (OTM) rounds, it was easy to produce three-shot groups measuring 0.5 inches. Conditions for this first session were close to perfect but not clinical, with temperatures around 65 degrees and a 7-mph quartering wind. Of course, such a breeze shouldn’t affect the flat-shooting 6.5 Creedmoor at 100 yards.

The long-distance portion of my range has diamond-shaped steel targets with 10-inch effective hit areas. Loaded with the American Eagle OTMs, we used the 10 BA Stealth to hit targets at 550 yards. With 3 mils of elevation dialed into the scope, three successive hits signaled our readiness to move onto 750 yards. Again, hits came easily, inspiring confidence to make the leap to the 1,000-yard plate. Here, the limitations of the scope mount came into play. Having dialed the maximum elevation of 6.3 mils, we had to use the reticle’s hash marks to achieve a proper holdover.

But getting hits at distance was an easy affair with this amazing rifle/scope combo. The little steel plate rang out almost too easily, making it a thrill rather than a struggle to hit at such a long distance. Conditions were mild, with clear skies signaling dry air. Temperatures were in the mid-60s, and a quartering breeze of about 8 mph demanded only a slight windage correction.

Feeling rather confident after the first session, we returned to the long-distance range a few weeks later to test the new Fusion ammunition, which conveniently shared the same 100-yard zero as American Eagle OTMs. But things weren’t quite as smooth this time. It took half a box of ammo to dial in at 750 yards, and we only achieved one hit at 800 yards. Our corrections didn’t seem to make a difference in one instance and then be overdone in the next. The Bushnell scope had been too dependable to be the cause. We left the platform more puzzled than confident, especially as the gun was slated for its final test, a mule deer hunt, the following week.

My testing partner called the next day with a revelation. “The sling stud in the forend fell off,” he said, having found it inside the case. Though a minor detail, the little accessory was likely rattling just enough to affect each bullet’s trajectory. Lesson learned: Loctite the sling stud before use!

There was no time to confirm this suspicion before the deer hunt. Trusting the original holdover chart produced via the Shooter ballistic app, my partner stalked and finally attained a bipod-supported line of sight on a buck. A single 327-yard shot—a relatively close one for this rifle—dropped him. The Federal Fusion round, a large-game cartridge, penetrated both scapulae and both lungs for a clean kill.

The sling stud issue is a relatively minor one that can be remedied with Loctite. It was fortunate to have figured that out before the hunt. 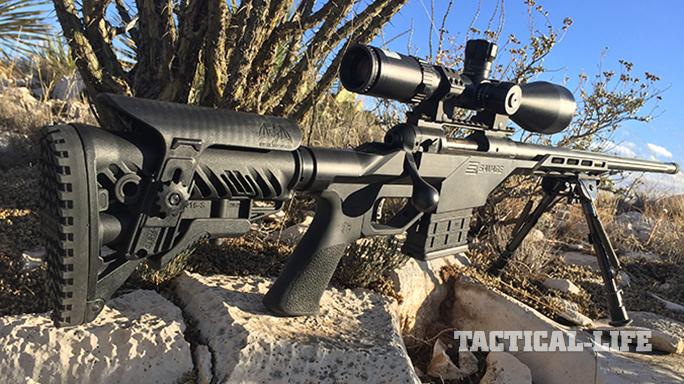 The Savage 10 BA Stealth is a standout choice for anyone wanting to expand the depth of their skills and collection for long-range shooting. As with any precision shooter, a dependable, clear optic like the Bushnell Elite Tactical scope used here should be part of the package.

This rifle, especially chambered in the wind-resistant 6.5 Creedmoor, is superb for large game at long distances. The weight and length of the setup make it best suited for pursuits that are mostly stationary—carrying it is a fatigue multiplier.

With real prices coming in at just over $1,000, topped with a dependable optic like the Bushnell Tactical LRS priced around $875, the Savage 10 BA Stealth is priced well below similarly performing custom builds. It’s as rewarding to shoot as it is powerful.

This article was originally published in “Gun Buyer’s Guide” 2017. To order a copy, visit outdoorgroupstore.com.