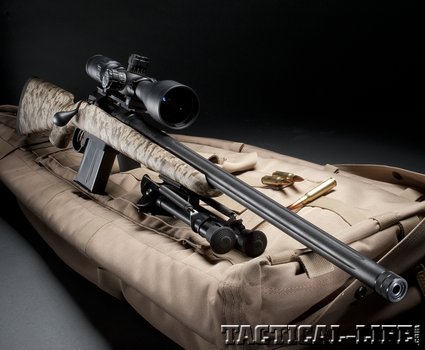 The Savage 10 FCP-SR fits the bill for an accurate, reliable and light rifle that’s easy to field. It provides an affordable option for rapid-deployment applications or as a patrol rifle, all in the proven 7.62mm caliber. Show with a Weaver Tactical 3-15x50mm scope.

The industry continues to produce precision rifles designed for use in prone—it’s easy to forget that many want something else. During most police deployments, officers are in the prone position, so weight is often a non-issue. This in turn has lead to a heavier, more complicated stock with a barrel diameter somewhere between a large broomstick and a trailer axle. Such stocks are adjustable for length of pull, cheekweld and even the buttstock’s height. As far as ruggedness, I have often dropped my rigs off of trucks only to pick the guns back up, confident that they’d fire reliably. And I’ve seen a sniper rifle roll off a roof and land at the bottom of a house, so it’s nice to know my rifle can actually survive something like that. However, this kind of ruggedness isn’t always necessary. There are tradeoffs to durability—your gun will be heavier, for one. The U.S Optics scopes I use could literally be thrown across the parking lot and still hold zero, but they also add weight. And steel mounts, bases and so forth are all heavy. 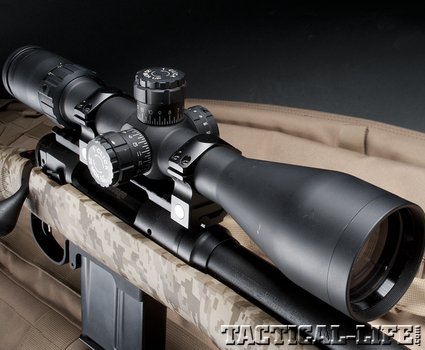 Weaver’s Tactical 3-15x50mm riflescope with a side-focus knob and mil-dot reticle proved to be reliable and trouble-free.

All the nice add-ons can also add complexity. One of my favorite sayings from Clint Smith was “if the space shuttle can fail, so can your rifle”—wheels come loose, set screws don’t set and what fits in one position may not fit in another. Thus, simpler is often better. For most applications, all you need is an accurate, reliable rifle with a simple stock, configured for duty use. This was exactly what had been decided for our department rifles when it came time to rebuild them several years ago. Although the actions were blueprinted and tuned, a nice medium-weight barrel was added and threaded to accommodate our Jet Suppressors. A simple stock was chosen in a nice camouflage with no mechanical adjustments. Cheekweld was accomplished with a stock pack and set up for each officer. These rifles remain in service, shoot incredibly well and have served for many years and many deployments.

Savage Arms’ precision rifles have long been known for their simplicity, affordability and, above all, accuracy. From their earliest days Savage rifles have been accurate (often to the consternation of the shooter with a custom-built gun). True, Savage’s triggers were a bit rough at first, but that has been solved with the Accutrigger. Savage’s stock choices used to be minimal as well, but today state-of-the-art stocks are available. I’ve encountered several Savage precision rifles at training schools I’ve attended and taught at. At the precision rifle portion of our Peace Officer Standards and Training firearms instructor school years ago, there were always two or three in class. These guns were often purchased by officers that simply could not afford spending a couple grand on a rifle. But the best offerings from Savage are those that are simple and affordable, and the 10 FCP-SR fits the bill. 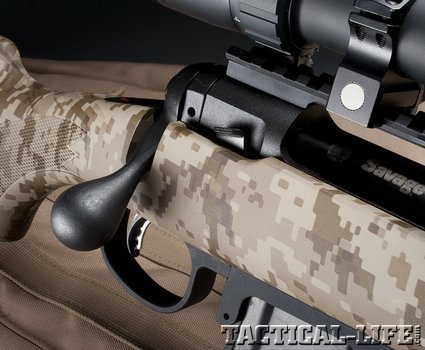 The 10 FCP-SR is a simple rifle, with all you need for precision-rifle use. The lightweight synthetic molded stock is in a tan digital camouflage. Two studs are included in the front of the stock to accommodate a bipod and sling—one is at the rear, in the bottom of the stock. The forend is flat at the bottom with a slight taper, allowing for solid positions while resting on a wall or other surface. The comb is straight. The grip is a standard rifle angle with stippling for solid control. The rear of the stock utilizes a nicely padded buttpad.

The action uses a bottom metal that accommodates the AICS magazine platform. A single 10-round Accurate-Mag is provided and includes a large paddle for magazine changes. There were no issues with insertion, and the magazine dropped free when empty. It rattled a bit but moved easily. My Accuracy International magazines fit quite a bit tighter—they still moved but didn’t rattle. Neither magazine locked the bolt open on the last round, which made for fast single-feeding.

The 10 FCP-SR’s oversized triggerguard enables use with gloves or by large hands. The Savage Accutrigger breaks cleanly, and the trigger safety acts almost like a two-stage trigger. If the trigger is pressed without the safety engaged, it locks the trigger in place and forces a reset in order to fire. Engaging the safety as you press the trigger provides a clean, crisp break.
The bolt uses a large knob that is attached to the bolt, as opposed to being screwed on. The knob is pretty straight and allows for fast bolt operation. The three-position safety is located directly behind the bolt, and all the way forward is the fire position: moved back one click, the bolt can be manipulated while the trigger is locked; moved all the way to the rear, the bolt is locked in place. The safety’s positions are close together but easy to feel.

Atop the action is a 20-MOA one-piece tactical rail for attaching optics. The barrel is a 24-inch carbon steel with a 1-in-10-inch twist rate. Although the barrel is referred to as being heavy fluted, by today’s standards it is medium weight. It is nicely fluted and has 5/8-by-24-inch threading to accept suppressors—my Jet Suppressor (361-758-9381; jetsuppressors.com) attached without issue. A knurled thread protector is provided for normal use. 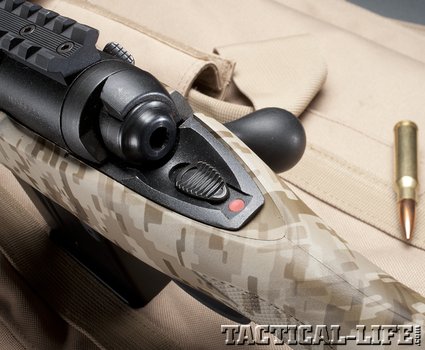 For testing purposes a Weaver 3–15x scope (800-635-7656; weaveroptics.com) was mounted, using Nightforce (208-476-9814; nightforceoptics.com) lightweight rings. This scope has proven to be an incredibly reliable and simple precision-rifle scope. With a one-piece 30mm tube, the scope is rugged and provides enough elevation for most applications. The reticle is a standard mil-dot placed in the first focal plane—it’s accurate at any power. Windage and elevation adjustments are 0.25 MOA, and the knobs easily lock in place. In order to adjust the knobs you need to lift up and turn. You can then push down, preventing any inadvertent movement. Once set, simply loosen the large knurled cap, set it to zero and tighten, no tools required. The side-focus knob is large and easy to access. With a 50mm objective and a short overall length, it fits nicely on most any rifle and can accommodate night vision. Power adjustment is accomplished by turning a large knob that doesn’t affect the placement of the scope cover. This particular scope has seen testing on several rifles and has proved to be very consistent. A Harris swivel bipod was attached for group testing and an Eagle Stock Pack was attached for eye relief. 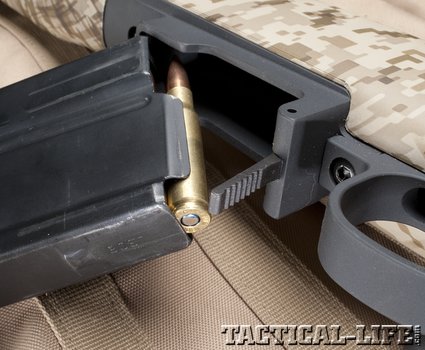 The AICS-style magazines don’t lock the bolt open on the last round, allowing for fast single-round feeding

As expected, the Savage turned in some pretty impressive groups, as good as those of rifles costing three times as much. The best group, measuring 0.45 inches, was achieved using Federal Gold Medal Match. Everything else was right at 0.5 inches. (The only way to get better groups is by firing handloads, and I am not sure even that would be worth the effort.) For duty use, this is excellent. Though there are a couple rifles in the shop that will have double the accuracy (or better), their actions each cost more than the entire 10 FCP-SR rifle and, honestly, their level of precision is unnecessary for most duty applications. The usual standard for police work is 1 MOA at 100 yards—the 10 FCP-SR cut that in half.

Now for the fun part, where this rifle truly shines. Weighing in at 8.75 pounds without the scope, the 10 FCP-SR approximates a carbine more closely than typical precision rifles do. Coupled with the standard stock configuration, the 10 FCP-SR is perfect for rapid deployment and unsupported shooting. Holding this rifle in full kit, either offhand or kneeling, is a breeze—it is well balanced, and the pistol grip accommodates these positions well. Firing from the kneeling position, groups at 100 yards were all inside a 2-inch circle, with an occasional 1-inch group. The bolt is pretty smooth and easy to manipulate, and with a few hundred more rounds it will probably smooth out even more. There weren’t any issues with barrel heating. When I ran a couple of rapid-fire drills at 50 yards from kneeling, everything easily stayed inside 3 inches. There were no failures to eject, and the rifle fed the polymer-tipped AMAX rounds without problem.

With a suppressor. the rifle is a bit barrel heavy, as one might expect, but not unwieldy. Adding 10 inches to a 24-inch barrel certainly makes a difference, but the rifle still shoots very well. One advantage to the barrel length is that it makes bolt lockup unlikely, even on more rapid-fire strings. (There was a bit of gas trickling back through the action, however.) On Barnes 175-grain rounds that use good, low-flash powders, the 10 FCP-SR shoots clean, even with the suppressor.

When I moved through the real world with this rifle in full kit, it was pretty pleasant. The gun points well and is lightweight and comfortable to carry. Without the suppressor, working with the rifle around the truck and other barriers is slick. In this configuration the rifle seems light enough to carry in a sleeve on your back when you deploy with a carbine. Without large scopes and other attachments, the 10 FCP-SR is quite light, though this does add a bit to recoil, especially in prone—after I tested a 15-pound rifle the same day, the difference became noticeable. But when I fired the 10 FCP-SR from kneeling, recoil was not as obvious and staying on target for repeat shots was simple. 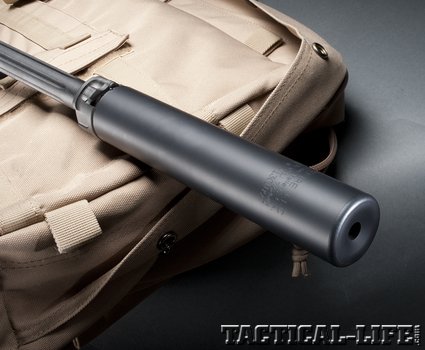 The paddle for releasing the magazine is large, and performing mag swaps is quick. The Accurate-Mag fits a bit tighter when fully loaded and drops free easily when empty. This mag still rattles a bit, and that my bother some, but reliability is king for me—the Accurate-Mag does not effect feeding at all. The mag I used did not rattle, but it did not drop free on occasion. This is typical of magazine-fed weapons, so be sure to try different magazines and set them up according to your preference.

The 10 FCP-SR was a ton of fun to shoot. It proved to be very accurate, reliable and easy to field. For those who want a 7.62mm patrol rifle without the issues of many semi-automatics, this is an excellent choice. As a deployment precision rifle, it is plenty accurate and can spend most of its time in prone. The 10 FCP-SR really shines, however, as a rapid-deployment rifle, perfect for active-gunman situations that call for a lightweight, precise bolt rifle. With a suggested retail price of $1,213, the 10 FCP-SR is affordable and within reach for most police officers and agencies. To find out more call 413-568-7001 or visit savagearms.com. 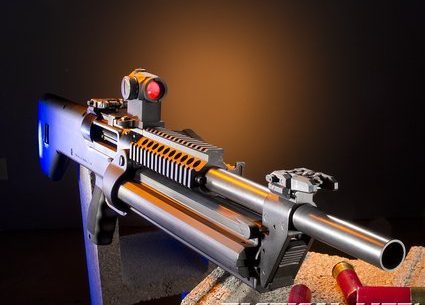