by Todd Burgreen
in Uncategorized
0

18
SHARES
1.1k
VIEWS
Share on FacebookShare on Twitter
Savage’s 110 BA was designed from the ground up with accuracy in mind. With its AccuTrigger, 3D bedding system and adjustable stock, you won’t miss.

It is nice to see a product evolve over time. The Savage 110 BA in .300 Winchester Magnum is a great case in point. My previous experience with a Savage precision rifle consisted of handling a 10 FCP, which had a more traditional form because of its McMillan stock. The 110 BA has taken the Savage concept of the tactical rifle another step forward. Its aluminum stock—better described as a “chassis”—AccuTrigger, oversized bolt handle, Savage’s 3D bedding system, six-round detachable magazine, wraparound optic and accessory rail, threaded muzzle brake, multi-adjustable Magpul PRS2 buttstock, and target-style pistol grip are all features calculated to enhance a BA user’s ability to surgically place .300 Win. Mag. rounds on target at distance. And that surgical precision is critical for the law enforcement marksman role. 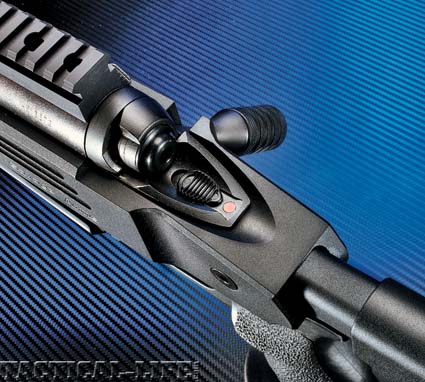 The 110 BA’s safety, working silently without a “click” when released, is located behind the bolt for ambidextrous access.

The 110 BA’s aluminum chassis, while not as svelte as a classic wooden stock or even fiberglass McMillan stock, is very functional for a rifle destined for tactical use. The 110 BA’s chassis allows operators to adjust the buttstock for individual needs in terms of length of pull and comb height, mount a bipod, and attach a sling. The three-sided, Picatinny-railed forend, which extends the full length of the receiver and halfway down the fluted, free-floated 26-inch barrel (29.5 inches with the muzzle brake), enhances the 110 BA’s ability to respond to mission specifics via optics and other accessories. The barrel itself is button-rifled and has a 1-in-10-inch twist rate. All together, the rifle weighs in at 15.75 pounds empty and measures slightly over 50 inches long depending on the adjustable buttstock’s position. 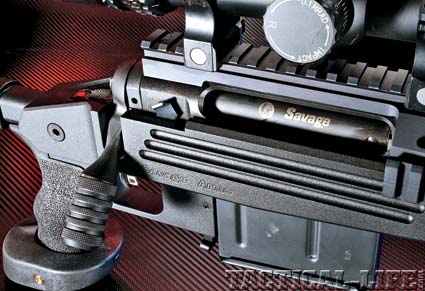 The 110 BA’s long action is meticulously designed with a floating bolt head to increase accuracy by ensuring a consistent lockup.

The Savage 110 bolt design that serves as the basis of the long-action BA must be discussed. Many misunderstandings surround the Savage bolt action, most attributed to ill-informed conjecture surrounding the floating bolt head and barrel nut arrangement. Many critics mistakenly label the Savage floating bolt head and barrel nut as strictly cost-saving measures versus an ingenious alternative method of producing accuracy without spending undue time and money on hand-fitting. The purpose of the floating bolt head is to allow the bolt’s locking lugs to line up independently from the bolt body. This eliminates any minor imperfections between the axis of the receiver and the axis of the bore. The Savage bolt finds its own “sweet spot” when it locks up due to the floating boat head behaving independently of the bolt’s main body. This also contributes to relieving any stress on the action from the heavy barrel constantly exerting pressure downward due to gravity. The Savage system enables a truly “free-floated” barrel. 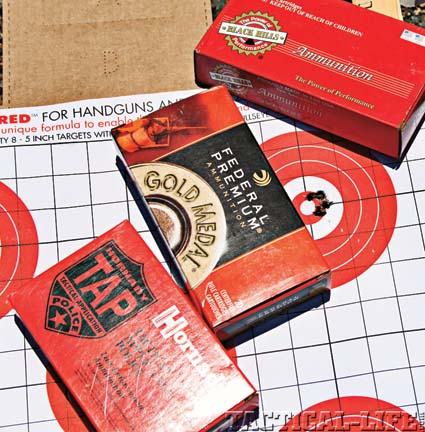 The second Savage attribute misconstrued solely as a cost-saving measure is the signature barrel nut. Almost perfect headspacing is achieved using the unique Savage method. Yes, production costs are reduced due to the chambering and headspacing being automated because of the barrel nut design. However, the design also contributes to a true barrel-to-receiver alignment, negating any conflicting alignment from associated parts. Savage’s recently introduced 3D bedding system reinforces all of the other positive traits of the Savage system. The AccuStock rail system is embedded throughout the stock, including the forend, with the close-tolerance slot interfacing with the action’s recoil lug. The AccuStock grips the action vertically and horizontally—thus the 3D nomenclature. The bedding offered is extremely rigid, an important factor in producing accuracy in conjunction with the 110 BA’s free-floated barrel.

The Savage AccuTrigger is just as important as the Savage bolt action, 3D bedding, and quality button-rifled barrel in the precision equation. A rifle’s trigger is the interface between the shooter and rifle and must be right or accuracy will suffer. The AccuTrigger stems from Savage’s desire to give the shooter a proper trigger that is crisp, creep-free and fully adjustable between 1.5 and 6 pounds by the user, yet totally safe from firing if jarred or dropped. A byproduct of the AccuTrigger design effort is the inclusion of a new three-position teardrop safety conveniently located in the middle of the stock, right behind the action, for smoother, quieter operation.

Without going into minutiae, the AccuTrigger’s distinctive release lever (AccuRelease) in front of the trigger is the secret to maintaining minimal trigger weight, without creep, while keeping the system safe. The AccuRelease must be activated (i.e. pulling the trigger) before the sear will move, firing the cartridge. A sudden drop or impact will not do this, even if the safety is off. The AccuTrigger is adjustable by removing the action from the stock and turning a single screw with the supplied tool. Importantly, the Savage bolt action is renowned for having one of the fastest lock times in a production rifle. Combine the fast lock time with the AccuTrigger, one of the finest triggers on the market, and it becomes apparent that the 110 BA is entirely built with accuracy in mind. 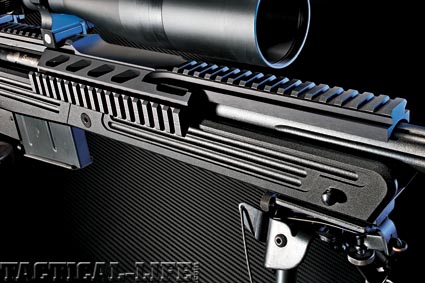 The chassis system provides three Picatinny rails so the 110 BA can be adapted as missions dictate via optics and accessories.

For optics, I mounted the 6.5-20×50 Leupold Mark 4 LR/T scope featuring a mil-dot reticle with Leupold rings and bases. I took advantage of the Leupold Custom Shop and had a custom elevation knob created for the .300 Win. Mag. load based on data provided: bullet weight, ballistic coefficient, velocity, and general temperature and elevation expected for the most use. Of course, all loads need to be verified based on conditions. The extended rail system found on the 110 BA does not have Picatinny slots where a scope objective is located and has a reduced profile. This facilitates using the lowest possible rings even with large objective scopes, allowing the scope to sit as low as possible on the rifle. The 110 BA’s rail system extends 18 inches forward from the rear of receiver. The Savage rail system has a 20-MOA angle machined into it to aid in preserving scope adjustments at long distances. No. 8-40 screws are used to fasten the rail to the rifle; these are much heavier than typical fasteners and reflect well on Savage’s attention to detail.

I limited my testing to Black Hills 190-grain Match BTHP, Black Hills 180-grain AccuBond, Federal Premium 190-grain Sierra MatchKing, and Hornady 178-grain A-MAX TAP .300 Win. Mag. loadings. I picked the best ammunition brands and loads, and felt no need to cast my net wider, since Black Hills, Federal and Hornady are industry leaders; my prior use with these loads supports this. I tested the rifle off a bench and prone, supported by a bipod and rear sandbag. The Federal 190-grain Match and Black Hills 190-grain Match produced the best 100-yard groups at only slightly above 0.5 inches. I believe that there are more indicative evaluations for a precision rifle than merely firing from a bench, but 1 MOA or better is a must, and the 110 BA exceed those expectations.

I then moved to the 300-yard range as a final evaluation of the 110 BA’s intrinsic accuracy, with the Federal 190-grain Match and Black Hills 190-grain Match loads performing the best again. Significantly, the loads held onto the 1 MOA (approximately 3 inches at 300 yards) or better criteria. 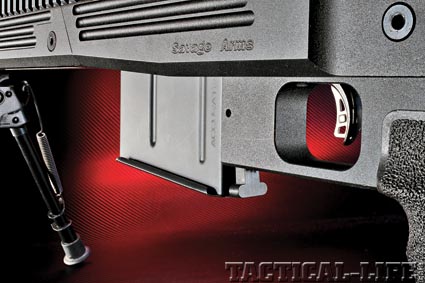 I decided to further test the Savage 110 BA using a competition format I discovered at a local LE shoot I attend annually. Competitors are tasked with engaging multiple hanging clay pigeons at 120 yards, then firing at more clay pigeons at 240 yards, and then TacStrike quarter-scale steel targets placed at 315 yards. For this test, shooting was done again from a prone position supported by a bipod in the front and sandbag under the buttstock. The six-round detachable magazine, oversized bolt handle, smooth action, and inherent accuracy of the Savage 110 BA made short work of the course of fire. The 6.5-20×50 Leupold Mark 4 scope enabled effective hold-overs with its mil-dot design. If preferred, a shooter can dial in the changes as well with the M1 turrets. The ability to custom-fit the rear stock, along with the muzzle brake, on the 110 BA allowed me to rapidly engage the multiple targets. I was able to ride the rifle’s recoil with minimal disturbance, work the action and engage the next target. Over months of numerous range visits, the 110 BA impressed me with its ability to place rounds on target, instilling confidence in its capabilities.

In an effort to show the Savage 110 BA’s versatility, a night-firing test and evaluation was incorporated. I recommend this because there is nothing like actually manipulating a weapon in low-light conditions to get fully familiar with its operation. I used an ATN PS22-2HPT night-vision converter in conjunction with the Leupold Mark 4 scope. It’s a great thing to not have to shuffle a day optic on and off a rifle in order to use night-vision devices. The Savage 110 BA’s rail system allows for the ATN PS22-2HPT to sit in front of the Leupold scope, effectively turning it into a night-vision device. This eliminates the need fora separate dedicated weapon system exclusive to night-vision tasks or having to constantly remove day optics from a rifle and replacing them with a night-vision device. The PS22-2HPT enables precise night fire out to 200 yards under the right conditions. It also serves as a force multiplier when employed on the Savage 110 BA, with the second-generation ATN product being reasonably priced for individuals and LE departments/agencies on confined budgets.

There are many “tactical” rifles on the market that are labeled as such based solely on a heavy barrel in a synthetic stock. This is not the case with the Savage 110 BA chambered in .300 Win. Mag. This rifle was designed from the ground up as a tactical rifle based on input from the other rifles in the Savage LE and competition lineup combined with feedback from end-users. The Savage 110 BA could well be the greatest evolution of the Savage tactical rifle.