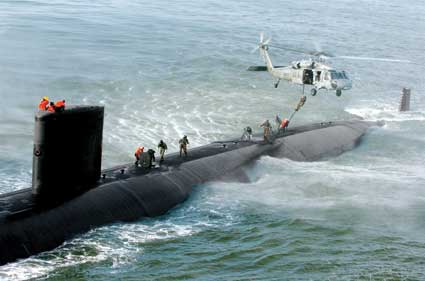 Terrorists have taken their global war to sea, and the operators who defend civilization must follow. Thus, there are many scenarios where anti-terrorist units will need to carry out a combat assault on a ship. The most likely include: a hijacked ship intended as a weapon against a port, off-shore oil facility, etc. (oil tanker, fertilizer transport turned into a giant bomb, et. al.); a hijacked ship with hostages (ie. a cruise ship); a ship commandeered by pirates; a ship transporting dangerous terrorists; or a ship transporting possible WMDs (weapons of mass destruction). 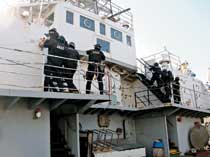 Ship assaults may be broken into four basic types including air assault, surface assault, sub-surface assault and combined assault. A helicopter assault inserts a team directly onto the ship via fast rope. A surface assault takes place from fast boats that approach the target ship and insert the unit up either side of the ship. A sub-surface assault relies on combat swimmers who approach the ship underwater, then board by climbing. Note that in some scenarios, combat swimmers assaulting a moored ship might choose to assault through a dock as well. Normally, when feasible, a combined assault is regarded as the best option. Assault teams may be inserted by means of a helicopter to seize the bridge and other crucial areas above decks, while surface assault teams swarm up the sides of the ship to clear below decks. A variation of the surface assault involving air transport may include insertion of assault teams and boats from aerial vehicles typically involving a wet jump at a distance from the target ship. The teams then approach the ship with small craft known as fast boats.

A well-trained maritime anti-terrorist unit such as the British SBS or the U.S. Navy SEALs will have all of these assault techniques in its repertoire. The basic tactics used for each type of assault will be discussed below.

Air Assault
Normally, at least four helicopters are used for air assault on a target ship. Two helicopters fly in the lead, carrying heliborne snipers to give cover while the assault teams are inserted. The other two helicopters carry the assault teams. MH-60s of the 160th Special Ops Wing can normally carry eight assault personnel, while CH-46s used by U.S. Navy SEAL or U.S. Marine units can carry up to 16 operators. Helicopters used as sniper platforms do not have to be as large as those delivering assault teams. The SBS practices sniping from Lynx helicopters. In addition to being rigged for fast-roping to insert assault teams, transport helicopters should also be rigged for extraction if necessary via a SPIE (Special Purpose Insertion Extraction) rig. Sniper-platform helicopters typically will have doors or windows removed and be set up allowing the sniper to fire from either side. Normally, only one sniper will be assigned to each of the two helicopters. Just as helicopter pilots inserting assault teams should have practiced holding steady above a rolling ship’s deck, those carrying snipers must have practiced hovering to provide a stable shooting platform.

All helicopters approach from aft—normally at night—flying very low to present a minimal radar signature. As they approach the ship, one of the helicopters carrying snipers will flare to each side of the ship and pop-up into an optimum shooting position. A 45-60 degree angle of attack is considered best to avoid skipping rounds into non-targets. The sniper aircraft are also tasked with providing real-time intelligence to the assault forces regarding any targets, booby traps, etc. They can also vector assault teams to the fastest route to the bridge. As close to the bridge as possible, the first transport helicopter then inserts the assault team, which should fast-rope to the deck quickly—the SBS trains to have at least four men on the rope at a time. This team moves toward the bridge and also gives cover to the second team being inserted. Some teams train using stairs or ladders on the ship, but the SBS trains to avoid stairs on the assumption that they may be guarded or booby-trapped.

Surface Assault
Small surface craft with speeds of 50 knots or greater allow those carrying out a surface assault to run down any target ship. RIBs (rubberized inflatable boat) or other boats may also be used to approach a target ship from the stern. Once in position next to the ship, a hook with ladder is used to allow operators to climb aboard the ship. In a surface assault without helicopter support, the first operators on board provide security for those still ascending to the deck. Once the full team is aboard, operators move first to seize the bridge. Maritime anti-terrorism teams prefer to use a combined air and surface assault with the helicopter-borne assault team moving to secure the bridge and upper decks while the surface force secures the lower decks.

Sub-surface Assault
Normally, a sub-surface assault is only practical on a ship that is docked, anchored, or stopped at sea. When docked, the swimmers may be able to leave the shore, then swim underwater to get into position for the assault. For many assaults, though, swimmers will be launched from a submarine and may use an SDV (Swimmer Delivery Vehicle) to get close to the ship. Most standard operating procedures require swimmers to link together while approaching the ship. It is advisable to remove face masks just before surfacing to limit the possibility of reflection. Once close to the hull, they extend a collapsible pole with hook to deploy the ladder. Some teams also train to climb anchor chains or mooring lines to access the deck. The point operator will stop just short of the ship’s gunwale and with pistol drawn check that the area is clear, then finish boarding. He will provide security while the next operators gain the deck.

For assaults on a stopped ship, distraction can be very useful. At night, bright lights on the “yacht” can degrade a sentry’s night vision. Some units train using the LRAD (Long Range Acoustic Device) as a giant “stun grenade.” The LRAD emits a very high-pitched sound in a 15 to 30 degree arc, which at 100 meters is extremely painful and at 500 meters remains effective. Snipers may be positioned in hides aboard apparently innocuous ships nearby or ashore when dealing with a docked ship. If the sub-surface assault is combined with an air assault, helicopters carrying snipers can swoop into position just as the swimmers begin their assault. Swimmers may also be used to secure the deck prior to insertion of additional assault personnel.

Combined  Assault
How air assault, surface assault, and sub-surface assaults are combined will vary. The decision will be based on the method that will get operators into positions fastest and with minimum exposure. The nature of the threat and intelligence will also be a factor in determining the type of assault. If there are hostages spread throughout a ship then it may be necessary to insert teams at various points to get operators to the hostages rapidly. If the ship is a “floating bomb” approaching a potential target, then the priority will be getting control of the bridge and engine room to stop the ship.

Clearing the Target Ship
The first objective is the bridge, to gain control of the ship and the ship’s master. Included in the clearing team should be a breacher or breachers equipped with cutting torches, explosives, Hooligan bars, etc. Normally, a four-man team will be assigned to secure the bridge since there may be multiple threats. The ship can be stopped from the bridge and the ship’s master can be used for intelligence about ship and crew. Clearing the remainder of the ship may then begin. If a simultaneous air and surface/sub-surface assault has been carried out, operators coming up from the sea normally begin clearing the lower decks.

Because of the tightness of passageways and compartments, two-man entry teams normally clear compartments. If breachers are needed, they will breach the door then step aside for the entry team. Breachers then move to the next compartment to prepare the way for another entry team. Teams will leapfrog until a passageway’s been cleared. A portion of the assault force will prepare a holding area for detainees.

Internal stairways and ladders are normally cleared by the point man moving ahead of the team. External stairways require a four-man team in order to secure multiple directions. Once an external stairway is deemed safe, another team will move through those securing it to clear to the next level. Teams will leapfrog each other until reaching their objective.

If hostages are known to be located in specific parts of the ship, priority should be given to reaching that area, though security cannot be ignored: The rescue team must arrive safely if it’s to carry out the rescue. Care must also be taken to watch for booby traps. If the ship carries potential WMDs, as soon as the area containing the suspected devices and the deck are secured, specialists should be inserted to deal with the devices.

These are basic techniques used to take down a ship controlled by terrorists but maritime anti-terrorism teams practice to be flexible, making themselves capable of dealing with an array of scenarios and a variety of ship architecture. Each incident requires its own specific plan—and quite likely adjustments to that plan once the teams begin the actual assault. All anti-terrorism operations require extensive training, and this is even more the case with maritime anti-terrorism operations. Not only are all standard clearing and rescue tactics required but teams must first board a ship towering above the waterline like a muliti-story structure that simulates an actual target for an approaching helio. Only after overcoming the difficulties in boarding the ship can assault teams begin dealing with the crisis. 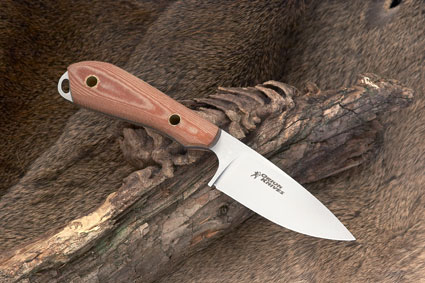 Terrorists have taken their global war to sea, and the operators who defend civilization…