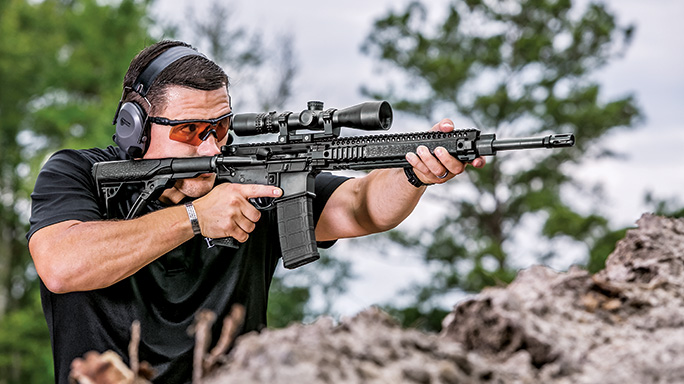 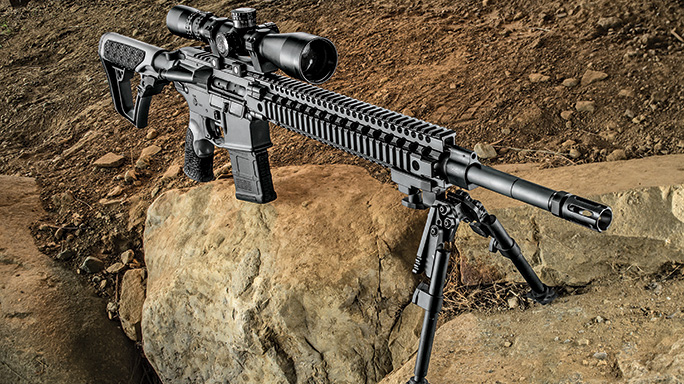 2 of 3
Seal Steel: The Daniel Defense MK12 Rifle
The MK12 features an 18-inch barrel that is cold-hammer forged in Daniel Defense’s plant in Black Creek, Georgia. The quad-rail offers plenty of space for accessories. 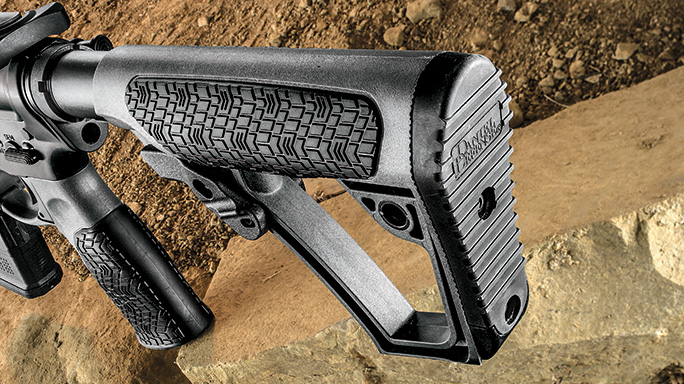 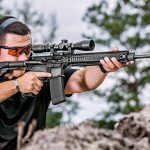 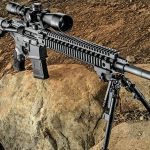 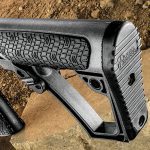 Since entering the special operations inventory around 2002, the MK12 Special-Purpose Rifle has become something of a legend. The MK12 is the result of a solicitation from the Naval Special Warfare community for a precision rifle based on the M16. The need arose out of the conflicts in both Iraq and Afghanistan, where teams were routinely engaging hostile targets at extended ranges. The MK12 was featured in the movie Lone Survivor, which is based on Marcus Luttrell’s account of a four-man SEAL surveillance team that was compromised during a mission in Afghanistan. The book and movie paid tribute to the valor and dedication of our warriors.

Dedication to warriors is something near and dear to Marty Daniel’s heart. Since forming Daniel Defense in 2000, Marty and his team have been committed to producing rifles that warriors can rely on. The growth of Daniel Defense has been extraordinary. In 2012 and 2013, the company was recognized as being one of the fastest-growing private companies in America by Inc. magazine. While not listed in the company’s bio, Marty and his wife, Cindy, are also involved in numerous philanthropic projects, allowing them to give back to the community and our military and law enforcement organizations. To borrow the phrase from the special operations community, Marty is truly a “quiet professional.”

The company currently occupies production facilities in both Black Creek, Georgia, and in South Carolina. With a combined 137,000 square feet, the company continues to improve its manufacturing processes with new technology, improved efficiency and a significant investment in state-of-the-art machinery. While well known for its SOPMOD RIS II rail, Daniel Defense is also the sole provider of L85 rails to the UK’s Ministry of Defence.

Daniel Defense’s MK12 is the latest member of the growing line of Daniel Defense rifles. I recently received for evaluation one of the new MK12 rifles with a “Tornado” Cerakote finish. According to Daniel Defense, the gray finish was derived after examining a large number of paint samples from a local home improvement store. Whatever research methodology the company used, Tornado is a great-looking color that is well suited to an urban tactical environment.

Anyone who is familiar with Daniel Defense knows that the company’s cold-hammer-forged barrels are at the heart of every rifle. Daniel Defense is one of only five companies worldwide that has this production capability. In 2014, the company added a second forge, allowing the capability to produce over 14,000 barrels per month.

The MK12 features an 18-inch, 1-in-7-inch-twist barrel that is matched with a rifle-length gas system. The MK12 is the first Daniel Defense rifle to feature a stainless barrel that is forged from a proprietary blend of alloys. The barrel is then given a salt-bath nitride finish and is high-pressure (HP) and magnetic-particle (MP) tested to military specifications.

The MK12 features mil-spec upper and lower receivers that are machined from 7075-T6 aluminum. The lower receiver has a flared magazine well and a rear quick-detach (QD) sling swivel attachment point. The external controls are in the standard mil-spec configuration. A 12-inch DDM4 quad-rail handguard provides ample space for operational accessories. The MK12 comes standard with rail panels that are made from Santoprene and are heat resistant to 300 degrees Fahrenheit.

A precision rifle demands a precision trigger. However, Daniel Defense recognizes that the MK12 may be employed in various roles that require a tactical, rather than a match, trigger. The MK12 comes standard with the Geissele Super Semi-Automatic (SSA) trigger. It’s a non-adjustable, 4.5-pound, two-stage combat trigger that, according to Geissele, “allows precise and accurate trigger control.” The SSA is safety certified by the Crane Division of the Naval Surface Warfare Center, and it’s well suited for precision applications as well as CQB and patrol applications. The Geissele SSA trigger on my test MK12 rifle broke cleanly and averaged 4.65 pounds.

In 2014, Daniel Defense introduced its own adjustable stock and pistol grip. The stock is designed to provide the shooter with a comfortable and repeatable cheek-weld and an enhanced mounting surface. The curved buttpad makes it easy to rapidly seat the rifle in the shoulder pocket, and it comes with a thin, concave pad or a thicker, convex pad. The rubber overmolded panels provide a positive cheekweld. The pistol grip shares the same angle of the 1911 pistol, making it more comfortable than the standard A2-style grip. The triggerguard is integral to the grip, and the side panels feature the same rubber overmolded panels found on the stock. When combined, the stock and pistol grip greatly enhance the ergonomics of the MK12.

I tested the MK12 with Nightforce’s 2.5-10x42mm NXS Compact riflescope. This is one of the best AR optics on the market and a favorite of the Nightforce crew for their personal rifles. I mounted the NXS with the provided Nightforce rings. This optic is one of the few 10X’s on the market that is parallax free from 25 yards to infinity. The Power Throw Lever allows for easy magnification adjustments, and the 42mm tube provides excellent light transmission. The mil-dot reticle and MOA ZeroStop turrets made the NXS easy to zero and adjust for extended ranges.

I tested the MK12 with two loads from AYSM Precision and a load from HPR. ASYM’s 70-grain Barnes TSX load averaged 2,696 fps and produced an amazing group at 100 yards that measured 0.41 inches. The ASYM 75-grain OTM load averaged 2,638 fps with a group of 0.73 inches, while the HPR 75-grain BTHP load averaged 2,589 fps with a group that measured 0.79 inches. I shot these groups from a bench using an Atlas bipod and a sandbag. The rifle-length gas system and the added weight of the longer barrel resulted in light recoil.

The MK12 is a great addition to the company’s extensive product line. Many organizations are recognizing the need for a special-purpose rifle to supplement more traditional precision platforms, and the MK12 is perfect for this mission. It’s another example of Daniel Defense’s support for our military, LE and sporting rifle communities. 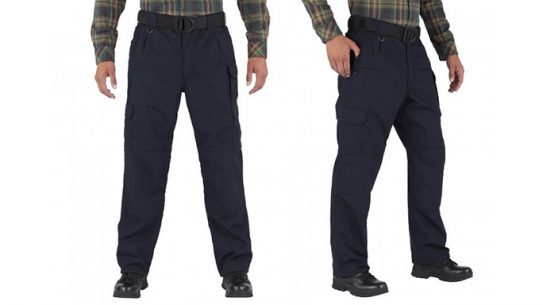 The all new Taclite Flannel Pant from 5.11 Tactical features a flannel-lined interior and...