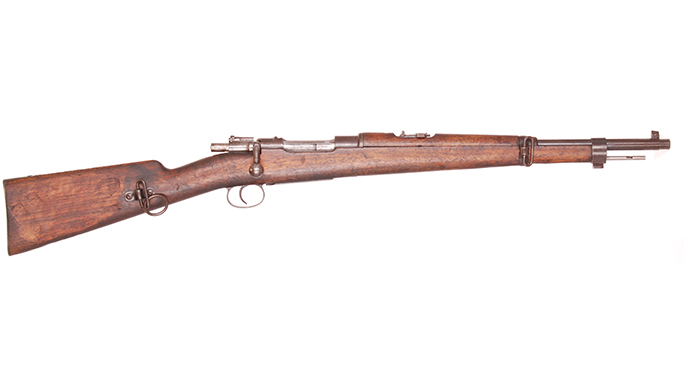 1 of 6
Mauser Model 93/95
Mauser Model 93/95: Imperial Germany, always anxious to cause problems with the British, arranged for the South African republics to purchase tens of thousands of modern Mauser rifles. The most common of these was the Mauser Model 93/95 chambered for the 7x57mm cartridge. Paul Mauser’s first smokeless-powder, bolt-action, charger-loaded, magazine-fed rifle featured a tubular receiver that held a one-piece bolt with dual front-locking lugs. The bolt was drilled out from the rear to allow insertion of the firing mechanism. The cock-on-closing bolt, with its non-rotating extractor, prevented double-feeds and made bolt manipulations smoother. It also featured a staggered-row-style box magazine that could be reloaded and fed cartridges more smoothly, and because it was completely enclosed by the stock, it was hard to damage. The 7x57mm cartridge consisted of a rimless, bottlenecked case, 57mm in length, that was loaded with a 173-grain, round-nose, full-metal-jacket (FMJ) bullet traveling at 2,300 fps. From 1896 to 1899, the OVS bought about 7,900 and the ZAR purchased 30,000 infantry rifles and 7,000 carbines, all Mausers, from Ludwig Loewe & Company and Deutsche Waffen und Munitionsfabriken (DWM). While called “Model 1895s” by most sources, these rifles and carbines used Model 1893-style receivers and bolts, and were often called “Model 93/95 Mausers.” 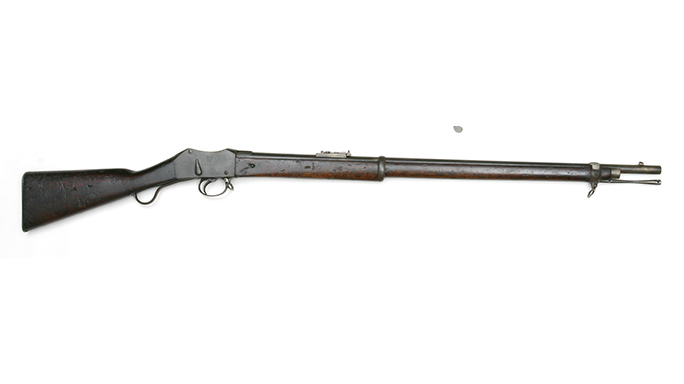 2 of 6
Martini-Henry Mark III
Martini-Henry Mark III: The Martini-Henry had been a favorite in South Africa since the 1870s. Its falling-block action was simple to use and rugged in the extreme. Its hard-hitting .450 Martini cartridge had proven equally effective against Zulu warriors and game animals. In 1888, Commandant-General Piet Joubert recommended that the ZAR government purchase 3,000 Martini-Henry rifles from the British firm of Kynoch followed by an additional 10,000 the next year. Additional Martini-Henrys were purchased from W.W. Greener, Westley Richards and several other British arms dealers. The .450 Martini Mark II cartridge used a 59mm, bottlenecked, Boxer-type cartridge with a coiled brass body attached to a rimmed brass base. Its 480-grain, paper-patched bullet was driven to approximately 1,350 fps by 85 grains of black powder. Photos from early in the war show significant numbers of Martini-Henry rifles in use, some of which appear to be high-quality sporting models. But as it became evident that the clouds of white smoke they created when fired gave away the Boers’ positions, their use dwindled. Even the most hidebound backveldt Boer retired his smoke-belching Martini-Henry for a Mauser or captured Lee-Enfield rifle. 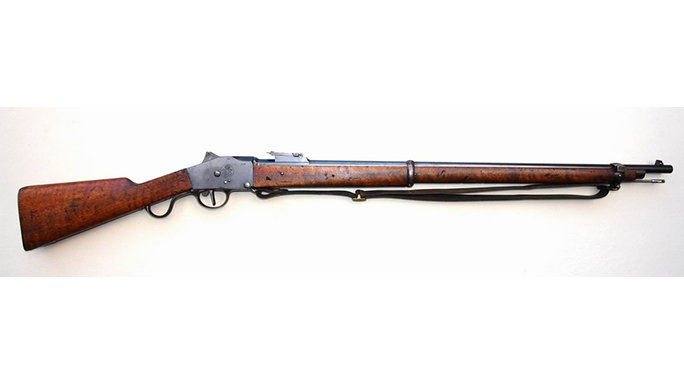 3 of 6
Guedes Model 1885
Guedes Model 1885: Prior to the Mauser Model 93/95, the Boers learned of the Guedes rifle. Designed by Portuguese Captain Luis de Castro Guedes Dias, it was a single-shot, falling-block rifle similar in concept to the Martini-Henry, but chambered for a small-bore 8mm cartridge. Portugal adopted it as the “Espingarda Modelo 1885.” The Portuguese placed an order for 40,000 of the rifles with Österreichische Waffenfabrik-gesellschaft of Steyr, Austria, in 1886, but it was canceled within a few months when they decided to adopt a Kropatschek repeating rifle instead. The approximately 18,000 Guedes rifles produced thus far for the order were then put into storage. In 1893, Commandant-General Joubert learned of those Guedes rifles and a quantity was ordered for trials from British dealers. While the ZAR bought 7,505 of them, the OVS declined to purchase any but were supplied with some by the ZAR just before the outbreak of hostilities. The OVS was the poor cousin, as no gold had yet been discovered and England had taken the diamond fields for themselves. At the start of the hostilities, they were short of firearms. The Guedes fired the “Cartucho com bala 8mm m/85,” which consisted of a rimmed, bottlenecked case 60mm long with a 258-grain, round-nose FMJ bullet that was driven to 1,755 fps by 70 grains of black powder. The later smokeless-powder “Cartucho com bala 8mm m/96” produced a muzzle velocity of 1,900 fps. The Boers purchased both types of cartridges. 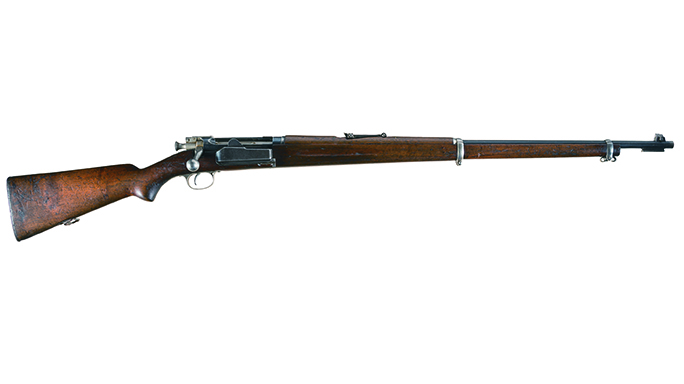 4 of 6
Krag-Jorgensen Model 1894
Krag-Jorgensen Model 1894: Another Steyr-made rifle that saw service with the Boers was the Norwegian Krag-Jørgensen Model 1894. Adopted by Norway in 1894, orders were place with Steyr in 1895 and 1896. The Krag was notable for its smooth-operating bolt and magazine, which was manually loaded through a hinged gate on the right side of the receiver. In May of 1896, the Boers were offered Krag rifles that had been left over from the Norwegian contract. The sample rifles performed well, so a contract was agreed upon, but it appears that fewer than 400 Krag rifles and carbines were actually delivered. These Krag-Jørgensen rifles chambered rimless, bottlenecked 6.5x55mm cartridges loaded with 156-grain, round-nose FMJs traveling at 2,300 fps. It appears that Krag-Jørgensens became status symbols among the Boers, and apparently most were provided to high-ranking officers and government officials. There are several photos of General Tobias Smuts armed with one, and ZAR President Paul Kruger also owned one. While the Krag was acknowledged as the most accurate of the rifles used by the Boers, its scarcity prevented it from gaining a reputation like the Mauser. 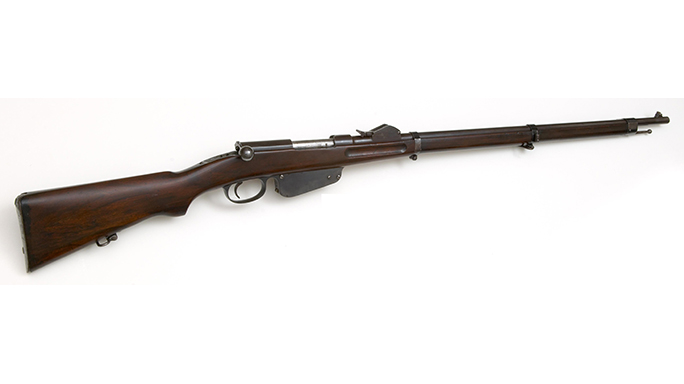 5 of 6
Mannlicher M1888/1888-90
Mannlicher M1888/1888-90: One other Steyr-made rifle saw limited service with the Afrikaners. In the 1870s, 1880s and early 1890s, European arms dealers sold large numbers of military-surplus riles in South Africa. While the republics’ governments did not buy many of them, they proved popular with cost-conscious Boers who purchased them from private dealers. Some of these were obsolete while others were overruns from government contracts. Among these were the Mannlicher Models 1888 and 1888-90. Designed by Ferdinand Ritter von Mann-licher, the Model 1888 was the first small-bore rifle adopted by the Austro-Hungarian army. It utilized a straight-pull bolt action and a five-round magazine that was loaded with a clip that was inserted into the magazine en bloc and fell out of an opening in the magazine housing when it was empty. The rifle fired 8x52R cartridges topped with round-nose FMJs that were propelled to 1,750 fps by 62-grain charges of black powder. Two years later, the Austrians adopted the shorter 8x50R, which was loaded with semi-smokeless powder for an increased muzzle velocity of 1,950 fps. Despite its case being 2mm shorter, the 8x50R could be fired in either Model 1888 or Model 1888-90 rifles. As with the Krag, these rifles’ unique cartridges limited their popularity and usefulness, and there are very few surviving photographs of Mannlichers in service. 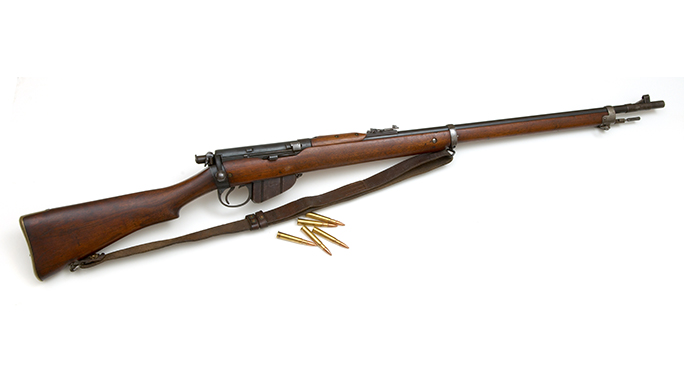 6 of 6
Lee-Enfield Mk I
Lee-Enfield Mk I: The last rifles used by the Boers were those of their enemy—the British Lee-Metford and Lee-Enfield. The British army’s first small-bore repeating rifle, the Lee-Metford, was adopted in 1888. It used a bolt action and a manually loaded, eight-round box magazine designed by James Paris Lee, and both were improved at Enfield arsenal. Various modifications led to Mk I, Mk II and Mk III versions. It was chambered for the .303 Mk I cartridge, which consisted of a 56mm case loaded with a 75.5-grain pellet of compressed black powder to push a 215-grain, round-nosed FMJ to approximately 1,830 fps. Four years later, the .303 Mark VI cartridge, loaded with smokeless cordite, was approved for service, which pushed a 215-grain bullet to 2,050 fps. But the hotter-burning cordite quickly eroded the barrel’s rounded Metford-style rifling, which was replaced with square-cut Enfield-style rifling. The new Lee-Enfield Mk I was approved for service in 1895 and was similar to the Lee-Metford, but it used a 10-round magazine. Four years later, the Mk I* was adopted, which only differed in minor details. 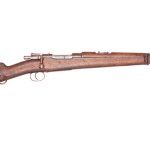 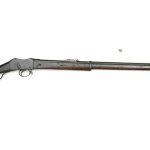 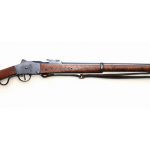 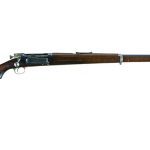 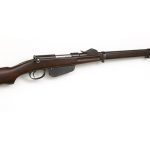 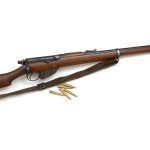 On January 24, 1900, 1,700 British soldiers made a night march and occupied Spion Kop (“Lookout Mountain”) along the Tugela River in South Africa. After driving off Boer sentries, they dug a series of shallow trenches in the rocky soil and sat down to eat their rations and awaited the arrival of their promised support. British commanders believed that this move would give them the high ground to put the Boer lines under threat of artillery bombardment, forcing them to withdraw, and thus permitting the British to advance and lift the siege of the city of Ladysmith in Natal province. It would also be the first significant British victory of the Second Anglo-Boer War.

But as the dawn breeze blew away the fog, the British realized that they had not reached the hill’s crest but had, in fact, dug in on a false ridge. Afrikaner rifleman of the Pretoria and Carolina commando units occupied the true crest—a knoll 300 yards away from the British trench line.

Accurate rifle fire from the Boer marksmen pinned the British down and, with the aid of artillery, began to whittle down their numbers. British soldiers could not raise any parts of their bodies above the trenches without immediately drawing fire. That night the British withdrew after suffering nearly 1,200 casualties. It was another military and morale disaster for the British soldiers, who had already suffered far too many at the hands of these upstart farmer-soldiers.

But for the stubborn and pious Boers—“Afrikaners” was the term they used for themselves—these victories led them to attributing their successes to “vertroue in God en die Mauser” (faith in God and the Mauser).

The Boer republics of the Orange Free State (OVS) and the South African Republic (ZAR, or more commonly known as the “Transvaal”) had been at odds with the British Empire for decades. The discovery of gold and diamond deposits in the Transvaal proved the final argument for imperial expansionists back in London, and the foreign office set in motion events that quickly led to open hostilities.

The Boer commando system dated back to the early days of the Dutch settlement of the southern tip of the African continent in the 17th century. When danger threatened, all Boers (also known as burgers or “citizens”) between the ages of 16 and 60 were required to join commandos from their municipalities or rural districts.

Each man had to supply his own horse, rifle, ammunition and rations sufficient for two weeks, after which time the central government was to resupply them. Members of a commando elected their own officers, whose orders they could also vote to disobey! Commandos were grouped into a larger force under the command of a general appointed by the republic’s president.

While viewed with disdain by European military officers, for more than two centuries this system had defeated Bantu armies such as the Zulus and the British army in the First Anglo-Boer War (1881), which rankled many British officers.

Both republics also maintained well-equipped artillery units and paramilitary police forces. Realizing war with the British Empire was inevitable, the Boer republics sent agents to Europe to buy more weapons—primarily rifles. Let’s examine six of them in the gallery above.

To eliminate the commandos, the British began rounding up Afrikaner families from the veldt, destroying their farms, crops and livestock. Boer women and children were put into “concentration camps” where poor sanitation, lack of medical care and an inadequate diet led to disease and death on a large scale. These harsh measures left bitter memories and anti-British emotions that exist to the present day.

After three years of hard fighting, the British, by sheer weight of numbers—more than 400,000 soldiers plus at least 100,000 black “volunteers” against no more than 46,000 Boers in the field at any one time—began to gain the upper hand. Finally, even the most die-hard of the Bitter-einders (bitter enders) agreed to negotiations, and on May 31, 1902, the Treaty of Vereeniging was signed, whereby the Boer republics came under British control.

This article was originally published in ‘Military Surplus’ 2017. To pick up a copy, visit http://outdoorgroupstore.com. 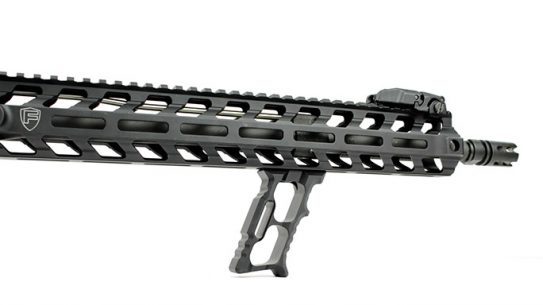 The HALO MiniVert from Tyrant Designs an aggressive side knurl for yaw control and...