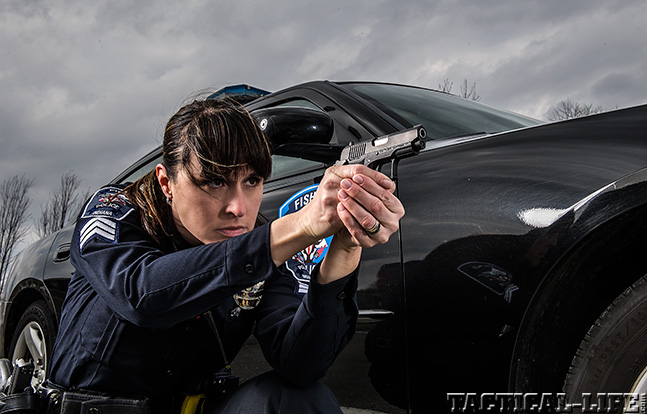 While the incidences of suspects attempting to take away an officer’s handgun may not be as common as portrayed on television or in movies, it still does happen far more often than is comfortable. In addition, there is the risk of a major malfunction rendering an officer’s handgun inoperable. In these types of situations where an officer’s duty gun is out of the fight, having a backup pistol can literally be a lifesaver. Of course, departmental regulations vary when it comes to backup pistols, but in all cases these tend to be very small and easily concealable handguns.

One gun that bears serious consideration in this role is the new Colt Mustang XSP, basically a mini 1911 minus the grip safety. This pocket-sized, recoil-operated, semi-automatic, single-action pistol has a 6+1 capacity and is chambered in .380 ACP. Originally in production from 1983 to 1996, the explosive growth of the market for extremely compact pocket pistols encouraged Colt to bring back the Mustang. And, in 2011, the new Colt .380 Mustang Pocketlite represented an advancement in the design, although the dimensions and parts interchangeability stayed the same.

ow the Mustang XSP takes these refinements even further. With its high-strength, all-polymer frame, the XSP is almost a full ounce lighter than its already lightweight predecessor, the Colt Mustang Pocketlite. At the front there is an integral SAAMI-spec rimfire accessory dovetail mount. Specifically designed lights and laser units to fit this rail are expected and will significantly increase the versatility of this tiny pistol. The triggerguard is distinctly squared off and features an added lip at the front bottom section.

At the rear of the triggerguard, just below the magazine release, the frame has a smooth indentation that allows for a slightly higher grip on the gun. In my case, I was able to get two full fingers onto the grip. This not only makes the gun more comfortable and controllable to hold and shoot, but it also raises the hand to be more in line with the axis of the barrel, which helps to reduce muzzle flip and perceived recoil. A channel has been carved out on the left side of the grip to provide faster and easier access to the magazine release, and there are molded thumb rests at the top of the grip on both sides.

“In these types of situations where an officer’s duty gun is out of the fight, having a backup pistol can literally be a lifesaver.”

The grip panels are, of course, part of the frame, a fact some shooters may dislike, as they cannot customize their grip choices. However, these are very comfortable and fill the hand while not being overly wide. The sides of the grip feature a pebbled texture, while the front and rear sections feature some aggressive, molded-in checkering that helps you maintain control of the pistol even under inclement conditions. At the rear of the grip is a well-designed beavertail that is comfortable and allows for a high handhold while preventing hammer bite.

The slide on the Colt XSP also carries its own distinct improvements. Machined from solid stainless steel bar stock using CNC equipment, Colt achieves very high tolerances. The ejection port has been lowered to provide for reliable ejection, and the slide serrations have been widened and deepened. This makes weapon manipulation much easier and faster for reloads or in case of a malfunction. The slide also features a sweat-, weather- and corrosion-resistant satin black finish in what Colt calls “diamond-like carbon,” or DLC. As to be expected, it is very attractive and well applied.

Another improvement comes in the sights. These are described as “high profile,” but they seemed pretty small to me. They are real sights, which is nice to see on such a small pocket pistol, and both the front and rear sights are dovetailed into the slide. This makes it much easier to change the sights later to something the user may prefer. The sights that are included are plain black, which would make them very hard to pick up in a low-light
situation. A high-visibility front sight would be a welcome improvement.

The controls on the Colt XSP are also well thought out and clearly designed for defensive use. The left-side-mounted magazine release sends empty magazine out of the gun fast, and it has been enlarged with a wider diameter to make it easier to engage quickly. The slide stop/slide release is fully functional for those who prefer this method of operation, and, most noticeably, the XSP has an ambidextrous thumb safety.

The thumb safety levers have a redesigned contour that provides for very positive engagement. You’ll notice the fast downward click before firing. Reengaging the safety requires a bit more effort, however. Colt has also narrowed the width of the two thumb safety levers in order to keep the pistol’s overall width to a minimum. Still, I found the safety easy to use. One other feature I like is that you can cycle the action with the safety engaged, so press checks and unloading can be done with a higher degree of safety.

The Commander-style hammer, magazine release, thumb safety and slide stop have all been left in a natural brushed stainless color to nicely offset the black finish on the rest of the gun. The single-stage trigger is solid aluminum and blackened. It looks externally like a standard 1911 trigger, but instead of coming straight back, it pivots up on a pin. Though my test gun’s trigger had a slight amount of take-up, it felt crisp and broke at 7 pounds of pressure.

The short 2.75-inch barrel is also CNC machined from solid stainless steel bar stock like the slide, and it remains in a bright stainless steel finish. Underneath the barrel is a full-length, polymer guide rod that features dual recoil springs. Internally, you can also see the Colt Series 80 firing pin safety mechanism. Essentially, this acts as a block preventing the firing pin from going forward and making contact with a cartridge primer unless the trigger has been depressed. There are purists who feel this safety mechanism ruined the feel of the trigger on 1911 pistols, but on a gun with no grip safety that was also not designed for precise bullseye shooting, I think it is a good idea.

Disassembling the little Colt is very simple and only involves ensuring the gun is unloaded, removing the magazine and retracting the slide to the point where the slide stop pin can be pushed out from the right side of the frame. Then the slide comes right off the front of the frame for maintenance. Inside the polymer frame you can see the aircraft-grade aluminum insert that provides guide rails for the slide and houses the gun’s serial number, which can also be seen on the outside through a small window at the top of the right side of the grip.

Two stainless steel magazines are included with the Colt XSP—a nice bonus, since so many pocket pistols only include one magazine. It is always a good idea to have at least one spare magazine. The single-stack magazines hold six rounds each and include witness holes on the sides and the Colt logo at the bottom. There is no magazine pad, for the sake of compactness and concealability, and the magazines fit very flush with the grip frame. A slight lip at the base of the magazine protrudes from the front of the grip when the magazine is in place, which helps users remove the magazine should it get stuck.

“The XSP should be an ideal option for cops looking for a tough and reliable backup gun that could save their life.”

For off-duty, undercover or civilian concealed carry, I would see this pistol most commonly carried in a strong-side pocket holster. I personally find this to be the most comfortable carry method that also provides a very fast draw when standing; you can simply look like a person casually standing with your hands in your pockets while you actually have a firm grip on your handgun. This method of carry is also the most forgiving for clothing choices and temperatures, but it is slower when drawing from a seated position.

As an on-duty backup pistol, many will opt for an ankle or pocket holster for carry, but on the support side. In this way, if an officer is trying to retain control of their duty weapon with their dominant hand during a struggle, he or she can draw and fire their backup pistol using the support hand. The gun’s snag-free profile also guarantees a smooth draw when needed. Given the Colt’s light weight—less that 12 ounces empty—and small size, you can comfortably carry it in a pocket or ankle holster all day without noticing it.

The Colt XSP’s performance on the range was exemplary; it was extremely reliable. Despite its size and weight, I also found it very comfortable to shoot. I experienced zero malfunctions, firing it as it came right out of the box and with no break-in period. Firing off-hand, it was easy to keep shots on target at 7 yards. Although this is a gun likely to be used at closer distances, it is still nice to know that it will perform at farther distances when needed. I also tested the Colt XSP for accuracy, firing from a sandbag rest at 7 yards. Here the accuracy results were excellent, with group averages across three different types of ammunition averaging less than 2 inches. My best groups measured less than 1 inch.

Colt is a brand that carries a lot of weight with gun-owners across the spectrum, and for good reason. With the new Colt XSP, we can see that this is a company that remains focused on quality, reliability and innovation. And the XSP should be an ideal option for cops looking for a tough and reliable backup gun that could save their life. 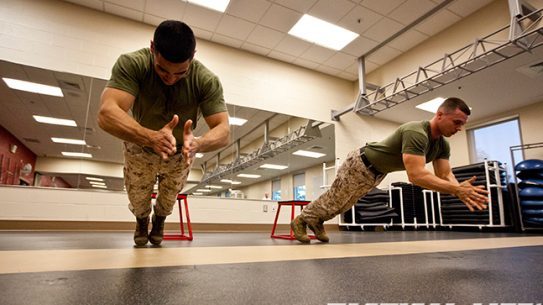 The 10-Point Workout System: Exercising with the Gunny

How proper dieting and exercising saved The Gunny, and can save you, from having...