by Leroy Thompson
in Guns
0

63
SHARES
9
VIEWS
Share on FacebookShare on Twitter
This FN P90 may be readily concealed, has a 50-round mag capacity giving a lot of firepower and is suppressed so that hearing will not be degraded when fired within a vehicle

The rise in terrorist attacks on diplomats, political figures and wealthy individuals has resulted in the inevitable up-gunning of security details. When I first started working on close protection teams in Europe during the 1970s, our teams were frequently armed with .380 autopistols—most often Walther PPKs. That was considered adequate. Occasionally I worked places where we were limited to .32 ACP pistols, where I used a Walther PPK-L. When I had a choice I carried a Browning Hi-Power backed up by a .380 PPK. Rarely, though, did we have long arms.

The first protective job I remember on which I was armed with more than a pistol was in North Africa, where I had a Beretta M12 SMG in addition to my Hi-Power. After that there were others, but most of the time we still only had handguns. Today, if security details have a choice they usually have long guns available. Of course local laws may prevent carrying of anything other than pistols. A few years ago I advised a team in Paraguay that was limited to only .32 ACP autopistols. The best they could do was to carry the high-capacity CZ-83 or Beretta M82. 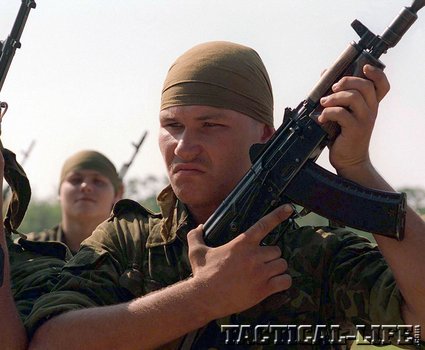 Ukranian Marines armed with AKSU-74 submachine guns. AKSU-74s are commonly used for security details throughout the Middle East and the former Soviet States.

As more details started using longer guns, submachine guns predominated. The Secret Service adopted the Uzi and trained its agents extensively in its use. It has since been replaced by the HK MP5 for Secret Service protective details. I believe that the Secret Service uses primarily MPA3 versions with retractable buttstock. It is quite possible that some MP5K compact versions are available for carry in a briefcase or concealed more readily under a coat. HK actually offers a briefcase designed to carry the MP5K and allow it be fired from within. I do not have any knowledge whether the Secret Service in fact has these or not. However, the Secret Service did used to use a “tailgunner” with an Uzi in a briefcase on foot escort.

One protective detail that I do know has used the briefcase to carry an MP5K is France’s GSPR (Groupe de sécurité de la présidence de la République). GSPR members are excellent shooters and train extensively at deploying the MP5Ks—that is assuming they have their weapons! In June 2012, the GSPR agents protecting French President Hollande at the Rio Earth Conference forgot to pack their weapons!

For some close protection units, the compactness and concealability, the high magazine capacity (50 rounds), penetration of ballistic vests when using AP ammo and greater range of the 5.7x28mm FN P90 PDW (Personal Defense Weapon) has made it appealing. Although at first the rather odd shaped stock of the P90 might make it seem ungainly, it is actually extremely ergonomic. However I have discovered, as have others who carry a P90 concealed, that a good sling (I prefer a single point) is an absolute necessity. I found the original sight supplied on the P90 very hard to use. Obviously others did too, for when the Secret Service adopted the P90 they specified a different sight. I would note that in my experience, the typical P90 sight has a tendency to catch on the inside of a jacket during the draw when worn slung beneath the jacket. The P90 was widely used by members of the Secret Service Uniform Branch and has seen some service with protective teams as well.

One problem I found when evaluating the P90 for close protection usage was carrying spare magazines. The 50-round magazines are rather long and require either a mag pouch on a harness for carry under the arm or some other arrangement. I found that it was possible to add a pocket inside one of the “photographer’s vests” often worn by protective teams. 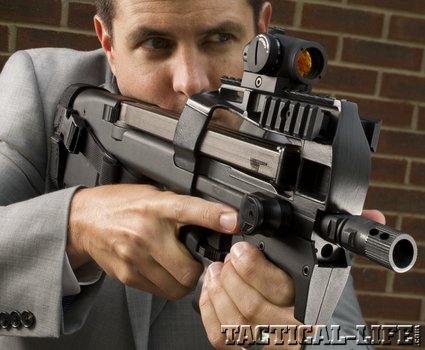 To gain greater range, striking power, and penetration against hard targets, some protective teams have adopted rifle-caliber compact carbines. Although rarely seen with Western protective teams, the AKSU (a.k.a. AKS-74U) version of the AK-74 is used by protective teams in Russia, former Russian satellites and nations in the Middle East. Photos often show Palestinian protective teams armed with AKSUs. When I was in Russia some years ago, members of one protective team with which I worked carried AKSUs when assigned to certain officials. Agents of the FSO (Federalnaya Sluzhba Okhrany), which guards high-ranking Russian officials, have used variations of the AK-74—including the AKSU. Within the FSO is the SBP, the Presidential Security Service, which use the compact “Vikhr” SR-3 compact assault rifle. The SR-3 is chambered for the 9x39mm round and has a 30-round magazine. I understand that the SR-3 has replaced the AKSU among protection teams for Russian officials, though some AKSUs might still be encountered. Actually, an improved SR-3, the SR-3M is more widely used. It has a handguard with a collapsible vertical foregrip and a quick detach suppressor, the latter being useful if firing from within vehicles. The 9x39mm cartridge is actually based on a necked up 7.62x39mm round. It uses a subsonic 250-grain bullet, which hits very hard at close range making it a good choice for a close protection weapon.

A U.S. Army 1LT Conducts a traffic checkpoint near a small village in Afghanistan. The modern M4 Carbine is surprisingly adaptable and capable of fitting a variety of security roles

When guarding their principal in higher risk areas such as Chechnya, the SBP has used the AK-103, the latest folding stock version of the AKM. Its 7.62x39mm round gives greater range. In the past, Russian official protective teams have used limos that incorporated a compartment in which the AK-103 or other heavier weapons could be carried. A door allowed the bodyguards walking alongside the vehicle to access the long gun if needed.

Other former Soviet Republics have continued to use the AKSU. The Ukranian State Guard Department, which provides protective teams, was using the AKSU as of 10 years ago or so. I have not heard that it has been replaced. A U.S. advisor who worked with the protective teams from the Special State Protection Service in the Republic of Georgia told me that they were using AKSUs as well.

I like the AKSU quite a bit. It handles very well in confined spaces such as a vehicle and has light recoil, which allows it to be hold on target fairly well for short bursts. Range is substantially less than a full-sized AK-74, probably 300 meters for most effective use. However, for most close protection assignments that is not an issue. Concealment and fast handling are more important.

The Bulgarians make a 7.62x39mm AKSU lookalike, which is still very compact but offers the more powerful chambering. This Arsenal product works well based on the couple of times I’ve fired one. Bulgaria’s National Guard Service, which protects high-ranking officials, has the authority to shoot at “threatening vehicles” so the heavier 7.62x39mm chambering may be useful when they shoot to disable suspicious vehicles. Based on the Bulgarian security service men I’ve encountered they are pretty hard core, so I’m confident that one way or another they would deal with the threatening vehicle—I don’t know how to say “Light it up!’ in Bulgarian.

Another option that gives the close protection detail a long gun chambered for the 5.56x45mm round is to use a bullpup design. I’m sure members of the British armed forces have been assigned personal security details where they have used the L85 rifle, but that would have been rare. Normally, those units that would pull close protection assignments would use the C8 carbine, the Canadian produced version of the M4. Royal Military Police protective teams, for example, use the C8. Some French operators assigned to COS (French SOCOM) may also have used a bullpup, the FAMAS, on protective assignments. It is the Austrian AUG, however, which has probably seen the most use for close protection.

The AUG offers a weapon that is only 27.2 inches overall in its carbine format, yet still retains a 16-inch barrel. The AUG also takes 30-round magazines, which aren’t bad for deploying from vehicles based on drills I’ve done, but 42-round magazines are also available when more firepower might be required. The only real problem with the AUG I’ve found in close combat is that the location of the ejection port—even if switched for left-hand usage—generally kicks brass in the face when using support side cover. Original A1 AUGs have the 1.5X Swarovski optical sight that also serves as a carry handle. Later versions such as the A2 have a detachable carry handle sight allowing the use of other optics.

One unit where I have seen use the AUG in the close-protection mission is Austria’s EKO Cobra CT unit. I seem to remember a contact in the unit sending me a photo some years ago of them deploying the AUG when protecting The Pope on a visit to Austria. Poland’s GROM CT unit has some AUGs, which they may have used on protective assignments. Italy’s GIS CT unit also has some AUGs, one again which may have been used on protective details or witsec missions. Australian MPs sometimes pull the close protection assignment, in which case, the Australian-made version of the AUG might be used. Some other special operations units that have AUGs in the armory will have found their compactness suits them well for close protection. 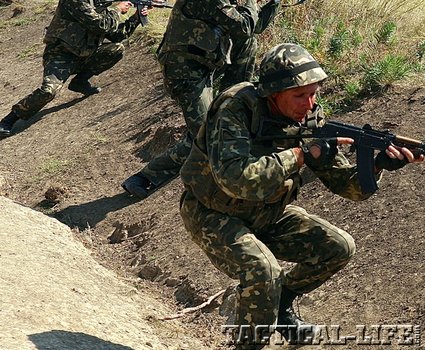 One other weapon that sees a substantial amount of use in the close protection role is the U.S. M4 Carbine or the Canadian-made C8 version. With stock collapsed, the M4 fits in a vehicle relatively well and offers the advantages of a quick handling, accurate, high firepower weapon. Many US allies have purchased M4 carbines or the Canadian C8 for their special ops units, which sometimes pull the close protection assignment. As a result, it has seen a lot of use. In the US armed forces general officer protective teams drawn from CID, OSI, or other units have frequently been armed with the M4, though some SOCOM operators assigned protective duties have used HK 416s.

The U.S. Secret Service has used M4 carbines for its CAT (Counter Assault Teams). Members of the CAT also have used specially built carbines such as the Knight’s Armament SR-16. Department of State Security protective teams also use the M4 Carbine as well as the Colt 9mm SMG. U.S. Marshals also have this weapon and use it on protective assignments. The Colt Commando in 5.56x45mm has been used by some U.S. government protective teams as well.

Long & Short Of It

When facing a substantial number of attackers, attackers with heavier armament, attackers in vehicles, or attackers at a distance, a compact SMG, PDW, or carbine can allow protective team shooters to lay down enough fire to allow the rest of the team to evacuate the principal. Occasionally, the mission will call for the long arms to be “guns up” and showing as a deterrent, but in many other situations they need to be kept out of sight. That’s why compactness must be traded-off with firepower.