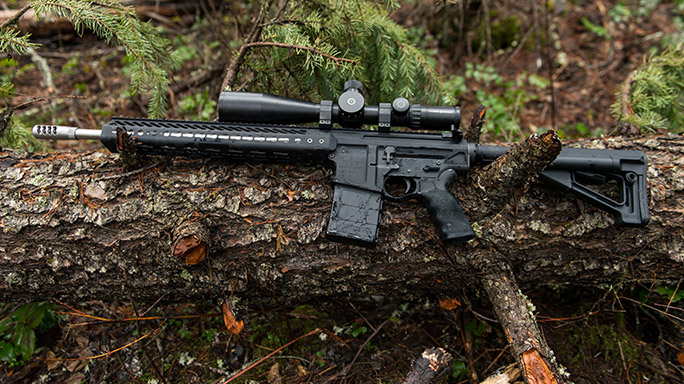 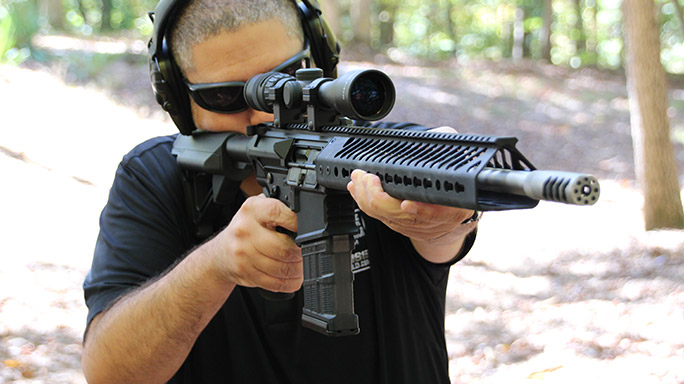 2 of 4
SP10: Seekins Precision’s High-Power .308 Rifle
During testing, the SP10 was light on recoil, and the flat-bottom handguard provided a stable rest for the support hand. 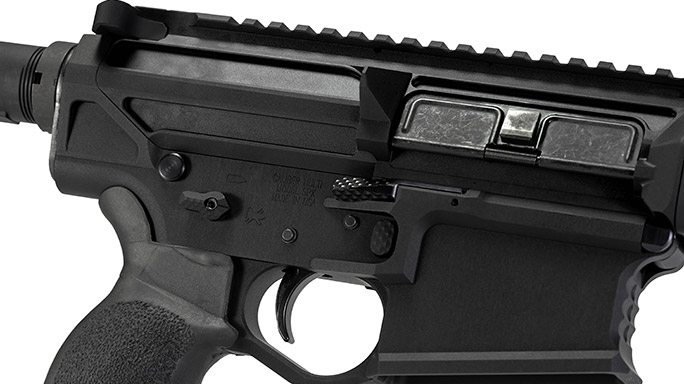 3 of 4
SP10: Seekins Precision’s High-Power .308 Rifle
The SP10’s operating controls are fully ambidextrous. Also note the lack of a forward assist on the upper receiver. 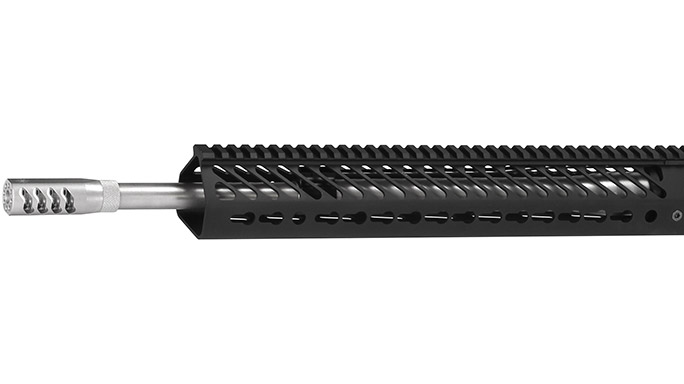 4 of 4
SP10: Seekins Precision’s High-Power .308 Rifle
The match-grade barrel comes with a very effective muzzle brake and is surrounded by a lightweight, free-floating, aluminum KeyMod handguard. 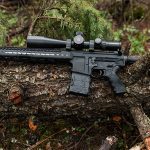 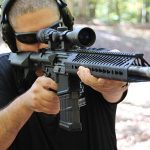 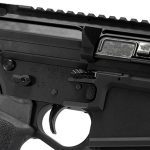 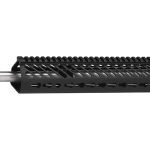 As the patrol rifle has become increasingly popular in law enforcement circles, the limits of the .223 round are also becoming apparent. It is important to keep in mind that the .223, or 5.56mm, was developed in order to allow soldiers to carry more ammunition, not because of its down-range effectiveness.

The thinking was that the more lead in the air the higher your hit ratio. Of course, the cartridge’s higher velocity and design did prove lethal enough for its continued use these past 50-plus years as the standard infantry round for American and NATO troops. So, too, it has proven itself extremely effective in law enforcement, however, as the military also discovered, sometimes there is just no replacement for the .308/7.62mm.

Whether you need a gun for rural home defense or even large animal control, there is a clear need for an accurate and dependable .308 rifle. This is easy to find in the new .308 Seekins Precision SP10 rifle. This direct gas impingement, semi-automatic rifle is based on the large-frame AR design, which offers a greater ease of training and transition from a standard multi-mission rifle, as the controls and method of operation remain the same.

Glen Seekins started Seekins Precision in 2004 to manufacture scope rings that were durable and weighed less than comparable steel rings. The growing need for precision and high-quality products in the AR market led him to a produce a billet AR lower receiver, a full line of AR accessories and eventually complete rifles.

The SP10 rifle is available with an 18- or 16-inch barrel, but the shorter barrel (tested here) may be the preferred option for ease of transport. The 16-inch, match-grade barrel is CNC-machined from premium stainless steel blanks and features 5R button rifling. Upon completion, the barrels are inspected four times to check exact tolerances for maximum accuracy and given a bead-blasted matte finish. Chambered specifically in 7.62x51mm, the barrel is given a lighter contour to help with overall weight reduction for the completed rifle.

The barrel is topped off with a Seekins Precision Advanced Tactical Compensator (ATC). Constructed from 416R stainless steel, it features a matte bead-blasted finish to match the barrel. The multi-port design proved extremely effective on the range at reducing both muzzle rise and perceived recoil.

To further improve accuracy, the SP10 features a one-piece, free-floated SP3R V3 KeyMod handguard that’s machined from 6061-T6 aluminum and given a hardcoat anodized black finish. The handguard itself measures 13.5 inches, and while the Picatinny rail on top is 12 inches, you still get a full 20 inches of uninterrupted rail on top thanks to the unique design of the upper receiver.

From the front, the handguard has a house-like shape, which gives it a wide, flat bottom that provides a great deal of stability and support when shooting off a barricade or other object such as sandbags. The thin design of the handguard makes it comfortable to use and helps reduce weight. Multiple KeyMod attachment points appear at the 3, 6, and 9 o’clock positions. Finally, there are six integral quick-detach (QD) sling mounting points interspersed between the front, rear and sides of the handguards.

The upper receiver is CNC machined from 7075-T6 billet aluminum and based on the Seekins Precision Integrated Rail Mounting Technology (IRMT) upper receiver.  This receiver, built exclusively for the .308 platform, features a triangular forward extension that becomes the attachment point for the handguard, giving it the strength of a monolithic upper receiver. Making the receiver thickest at the point where it meets the barrel helps stabilize the rifle and improve accuracy.

The upper receiver alone indeed looks tank tough, but it also features significant lightening cuts to reduce its overall bulk and weight. Most interestingly, the flattop Picatinny rail design actually stretches to the very front of the barrel mount, giving the shooter a full 8.5 inches of solid receiver rail space for mounting optics. As an optics-ready rifle, sights are not included, but the BCM Mod 3 charging handle is. This charging handle features an extended tab on the left side for one-handed operation of the rifle. It also makes it much easier to operate with low-mounted optics that can get in the way of traditional AR charging handles.

The rifle does include a standard steel dust cover to keep dirt and debris out of the bolt and chamber, but there
is no forward assist. Instead, the bolt carrier has exposed cuts that allow the user to manually push the bolt forward with the thumb or finger if needed/desired.

The lower receiver is also machined from 7075-T6 billet aluminum and hardcoat anodized in a matte black to match. It features several lightening cuts that match perfectly with those on the upper receiver. The front of the magazine well is also grooved to offer improved purchase, and the magazine well itself has a large beveled opening for faster and easier magazine changes. The integral triggerguard is enlarged to allow for easer use with gloves.

All of the controls for the SP10 are fully ambidextrous, including the bolt hold-open/bolt release, which can be operated with just the trigger finger for a right-handed shooter, as well as the magazine release and safety selector with a 45-degree throw. There are clear advantages to this system for left-handed shooters as well as in long-distance situations that may place the shooter in awkward positions where the traditional controls may be hard to reach. In tactical situations, however, I find that the more controls and the more buttons, the more that can go wrong.

In any precision rifle one of the most important considerations is the trigger, and here Seekins Precision has not scrimped, installing a 3.5-pound CMC drop-in trigger kit. This outstanding single-stage trigger had no creep or overtravel and an extremely crisp lever-like break. On the range, it was a pleasure to shoot and aided greatly in achieving precision shots. The SP10 also features the Ergo Deluxe Grip, which has a heavily textured rubber overmolding, enlarged palm swells, ergonomic finger grooves and a large beavertail.

Seekins Precision also uses a proprietary buffer system that fits within an AR-carbine-sized buffer tube. This allows for an easy transition for any shooter who wants to replace the included stock. Still, what is included hardly needs replacing. The six-position-adjustable Magpul STR stock features a stable cheekrest and internal storage space for small items such as spare batteries. The reinforced polymer A-frame design includes a friction-lock system so that when you set your length of pull it stays there. There are also multiple sling loops and ambidextrous QD sling attachment points.

On the range, the Seekins Precision SP10 performed flawlessly with zero malfunctions after shooting it right out of the box with no maintenance performed. Off-hand, the rifle was handy and comfortable to shoot, and lightweight for a .308 AR. Accuracy testing was conducted from a stable benchrest position at 100 yards using multiple loads and bullet weights with a 3-9x40mm variable-power Trijicon scope.

The results in the accompanying chart speak for themselves, as this is most certainly a sub-MOA-capable rifle. The SP10 also has the advantage over standard bolt-action rifles in that it offers the precision shooter the ability to deliver fast follow-up shots and a much higher magazine capacity.

Based out of Lewiston, Idaho, this company exhibits a commitment to quality and stands behind its products with a lifetime warranty.

This article was published in the 2016 Gun Buyer’s Guide. To purchase a copy of this magazine or subscribe to any other Harris Tactical magazine, please visit HarrisTacticalStore.com. 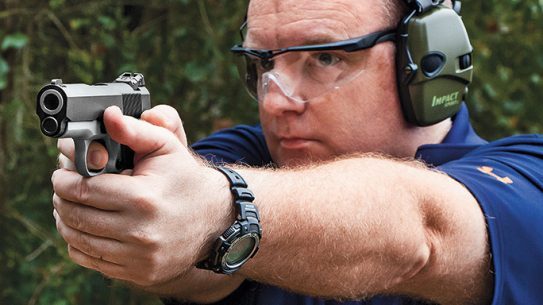 3 Expert Points on What Makes a Good Bullet

When looking at the properties of a bullet and its use in the field,...