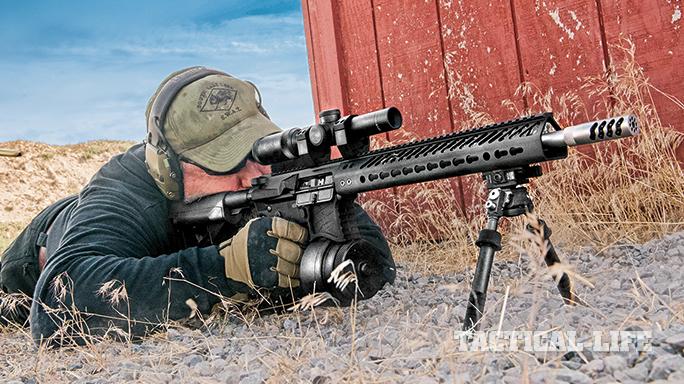 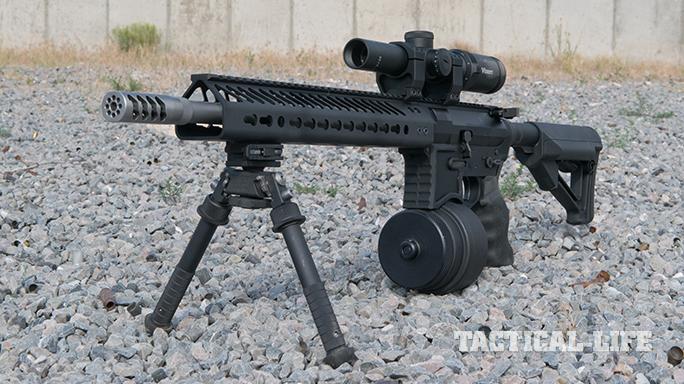 2 of 3
Gun Review: Seekins Precision’s Pro SPRO3GL
Several cutting-edge upgrades are built into the SPRO3GL to make it a sub-MOA tack driver, including the SP3Rv3 rail, which has KeyMod slots and a flat bottom for stability. Shown with an Atlas bipod and an X Products drum mag. 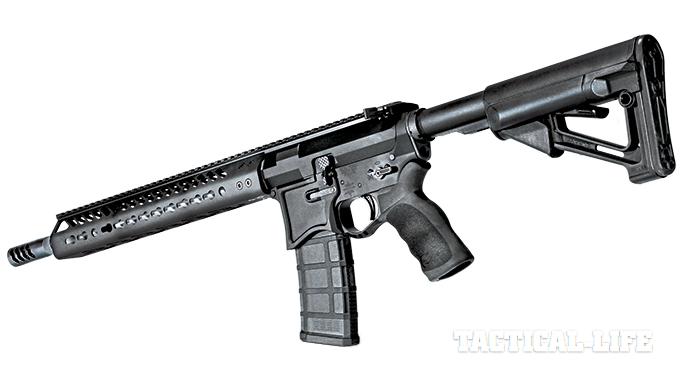 3 of 3
Gun Review: Seekins Precision’s Pro SPRO3GL
The SP223 lower receiver is machined from a billet of 7075-T6 aluminum and features a beveled magazine well for fast reloads. 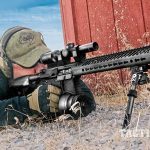 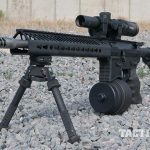 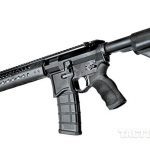 Seekins Precision is a perfect example of American ingenuity, drive and a willingness to go it alone rather than accept what is out there. It’s another situation where someone builds a “better mousetrap” and turns it into a thriving business. In this case it started with a set of scope rings and resulted in one of the premier AR rifle builders today.

Glen Seekins was an avid hunter looking for a better way to mount his scope to his rifle. While the scope rings he had worked on occasional hunts when a few rounds were fired, they fell short during long hunts in the rugged mountains of Idaho. There were a few out there designed for precision rifle-shooters, but they were steel—heavy and costly. Less costly mounts were weak and moved, ruining consistency. Glen wanted something better and returned from the hunt set on building a better set of rings.

I had similar experiences as a police marksman during this same time period. Many officers were issued the same scope rings and mounts that failed on Glen. During one training course, my partner’s scope fell off during a low crawl, making the final shot extremely difficult. Stronger rings weighed a ton and were hard to get. Lucky for me, Glen decided to do something about it. He borrowed some shop time and built his own set of lightweight rings. Made from aluminum, they matched the material most scopes were made of and held up under hard use. They worked so well that word spread quickly.

Selling rings on the side, Glen decided to take a bit of risk and purchase a CNC machine rather than borrow shop time. Working in his garage with help from his wife, Katie, the business grew to the point were he could quit is full-time job. Next, he moved the company into its own shop and built his first billet lower receiver. After some success, Seekins Precision began offering complete rifles, and now the company is housed in a state-of-the-art, 25,000-square-foot facility in Lewiston, Idaho. I attended the building’s grand opening in 2014, and everyone present could see that the future for Seekins Precision was bright. I also got a chance to shoot some Seekins rifles, and I quickly arranged to test more at my home range.

I first tested the Seekins Precision Pro Series SPRO3GL, a cutting-edge rifle set up for delivering top precision, whether it’s on duty, in the field or in competition. The SPRO3GL begins with Seekins’ iRMT-3 billet upper receiver with a 14.5-inch, match-grade stainless steel barrel installed. Precisely machined, the upper features a .223 Wylde chamber for enhanced accuracy and M4 feed ramps for reliability. Seekins’ ATC muzzle brake is permanently pinned and welded to the muzzle. Its ports are designed to provide a minimal dust signature while cutting down on recoil and muzzle rise. The bolt carrier, low-profile gas block and gas tube are all Melonite coated for corrosion resistance.

“The carbine’s reliability was excellent, as you might expect. These rifles are essentially custom builds, put together one at a time …”

Surrounding the barrel and low-profile gas block is a 12-inch SP3Rv3 handguard. Designed for precision work, it is flat along the bottom and rounds nicely to the continuous top rail. This makes it easy to use the carbine on bags, barricades or other surfaces for a solid purchase. KeyMod slots in the 3, 6 and 9 o’clock positions allow for the addition of rails and other accessories.

For testing I added my Atlas bipod using a short KeyMod rail mounted to the bottom of the handguard. For targeting I used a 1-6x24mm scope with an illuminated duplex reticle for better aiming at range. I installed the scope in a set of Seekins’ 30mm rings, which made for a slim, solid mount.

Right off the bat, this SPRO3GL’s accuracy is excellent. I used one at the grand opening event, and just about everyone was able to regularly hit targets at 300 yards with this carbine. Thanks to the muzzle brake, it is soft shooting and moves very little. My best group, measuring 0.4 inches, was produced with Silver State Armory’s 77-grain OTM ammo. There is just something about Seekins’ matched receivers that produce incredible accuracy. Right behind the Silver State load was Hornady’s 75-grain BTHP, which produced a best group measuring 0.5 inches. The SPRO3GL tended to like the heavier bullets, although it also did well with Liberty’s 55-grain Silverado ammo. Nothing fell outside of 0.75 inches at 100 yards. Glen tells me this platform’s design has gone into the company’s 7.62mm NATO rifle, and it is producing similar accuracy. I can’t wait to test it, but it looks like Seekins has this part of the build process down pat.

Next I engaged targets at 200, 300 and just a tad under 400 yards, and this rifle did not disappoint. I used a couple different programs on my iPhone to get the proper measurements. Wind was not much of an issue, so hits were regular and easy. For those looking to compete, this muzzle brake works really well. The rifle barely moves, so I could easily watch hits and make fast follow-up shots.

Flat-bottomed handguards on precision bolt rifles are anything but new; making them work well on an AR has been a bit more problematic. There are a few out there, and the SP3Rv3 handguard is a really nice one. Mounting a small rail to attach the Atlas bipod, it worked great from prone. Removing the bipod, the handguard sat nice and flat on my pack. The handguard also worked well on a couple of barricades. I also used it in positions with sandbags, and it provided about as solid a rest as possible under field conditions. Where it really shined for me was shooting from a braced kneeling position. The handguard allows the rifle to truly rest in my hand without rolling to either side. The entire design lends itself to precision shooting. Along with the KeyMod slots, there are QD sling points at both the front and rear of, making it useful in any tactical environment.

The carbine’s reliability was excellent, as you might expect. These rifles are essentially custom builds, put together one at a time, so you expect them to work, and this rifle did not disappoint. The SPRO3GL carbine had no issue digesting every round from 55 to 77 grains, placing each case into a nice little pile.

It is always nice to see someone take an idea and turn it into a successful business. It happens less frequently than it probably should. It takes hard work, dedication and a strong commitment. It’s a huge bonus when the end product is truly excellent. The firearms industry seems to do a good job of this. Sprinkled among those just looking for a quick buck are the innovators with a vision and the drive to take it to the next level. Glen Seekins and Seekins Precision epitomize that idea. Starting with simple scope rings, Seekins Precision now builds some of the finest AR rifles and accessories you can buy. From the looks of the new facility, it’s unlikely the company will outgrow it soon, but if history is any indication, that just may not be the case! 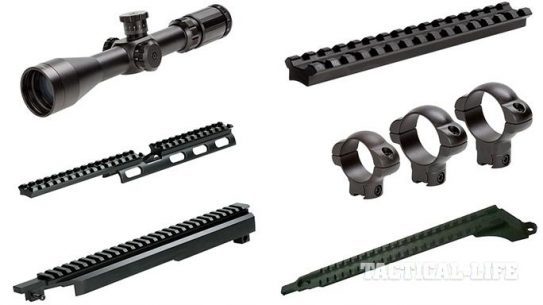 Sun Optics USA takes its elite rifle enhancements to the next level with scopes,...