The Sterling was originally de­ve­­­loped in 1944 as a replacement for the Sten submachine gun. Designed by George W. Patchett, the chief designer at Sterling Armaments Company, it was produced in a trial run of 120 SMGs during 1944. Field-testing included issuance to some glider troops during Operation Market Garden, the jump at Arnhem depicted in the film A Bridge Too Far. I have not been able to find any reports of how the limited number of “Patchetts,” as the SMG was called at the time after its designer, performed. The Patchett, by the way, was designed to work with Sten magazines as well as Patchett magazines, as there were hundreds of thousands of Stens already in service. 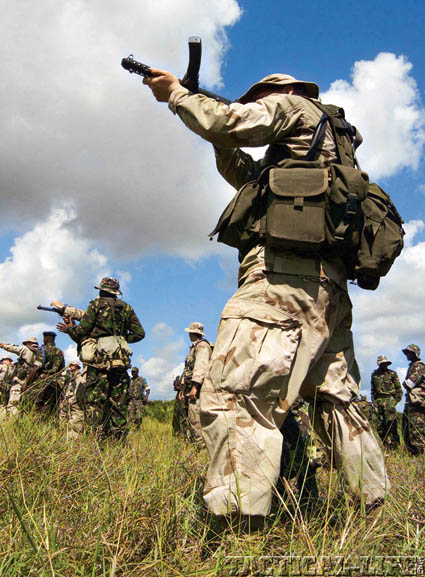 Sterling SMGs are still in service today. This Marine trains with an L2A3 during a cross-training exercise in Kenya. DoD Photo

That large number of Stens—millions by the end of the war—still in armories made adoption of the Sterling too expensive, even though it was a superior SMG. However, in 1951, the Sterling was adopted and began to replace the Sten by 1953. As adopted, it was designated the L2A1. Over the many years it remained in service, it evolved through the L2A2 and L2A3, which is also known as the Mk IV (the version upon which the Century Sterling Type II is based). Changes during that time period were relatively minor. 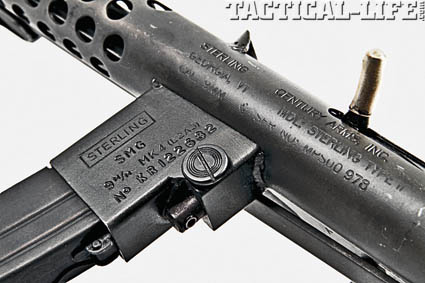 While it may be tempting to grip the magazine or mag well of the Sterling, pressure in this area can lead to reliability issues.

Sterling Traits
Among the desirable features of the Sterling SMG are an under-folding stock, a bolt with cuts to remove dirt and fouling from inside the receiver as it cycles, a selector switch rather than the safety cut into the receiver and crossbolt selector of the Sten, and a 34-round magazine that uses rollers to greatly enhance reliability. The Sterling fires from an open bolt. As with the Sten, the magazine inserts from the left side. The ventilated barrel “casing” (shroud) allows a good grip with the support hand. 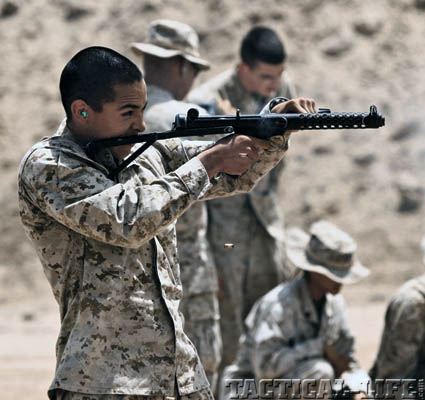 WWII-era Sterling
submachine guns are still deployed around the world. U.S. Marines have trained with them to assist Iraqi security forces. DoD photo