by Dave Spaulding
in Guns, Handguns
0

0
SHARES
7
VIEWS
Share on FacebookShare on Twitter
The .40 caliber SR40 autopistol combines a sturdy polymer frame with a stainless steel slide assembly for the ultimate in rugged durability.

Those of us who were on the job during the revolver-to-pistol transition of the late 1980’s are likely to remember an interesting phenomenon. The original move was to 9mm pistols with a double-action to single-action trigger transition. The thought was that the long DA trigger would be like a revolver and would help resist negligent discharges, while the short SA trigger action would facilitate accurate shooting. As instructors began to understand that training officers to work through the long to short trigger transition was difficult to say the least, a call went out for a consistent trigger action. Many manufacturers thought this meant that law enforcement was looking for a long trigger stroke each time, as was the case with the DA revolver. The fact is, these guns were even harder to shoot well. Then a previously unknown Austrian company stepped to the forefront with a polymer pistol that was light, easy to maintain and simple to shoot due to a short striker-fired trigger action. The truth is we should have understood this, as the pistol that knowledgeable shooters craved was the 1911 with its short-cycle trigger that made fast and accurate shooting much easier.

What American law enforcement officers and many legally armed citizens want in a carry pistol is a short action, reasonably sized pistol in .40 caliber. The Glock 22 and the S&W M&P in .40 S&W are what cops and concerned citizens are buying and this being the case, is it surprising that Ruger has introduced a service-grade, trim, light, easy-to-shoot striker-fired autoloader in .40 caliber? 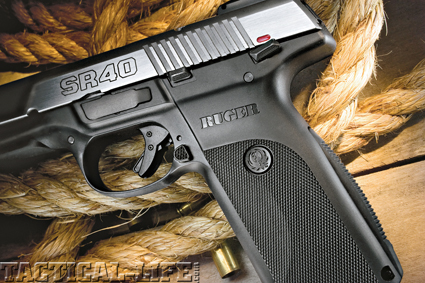 The safety, located at the rear portion of the frame, is reminiscent of the M1911’s.

With all of the same features of the popular SR9, the SR40 will likely prove popular with cops worldwide. A thin grip frame with the reversible backstrap to better fit a wide variety of hand sizes will please procurement officers who must meet the needs of a diverse workforce. The grip is intended to follow the lines of the 1911, keeping in mind the grip is a bit thicker due to a double-stack magazine. The flat backstrap simulates a 1911 with a flat mainspring housing while the arched version simulates a curved housing.