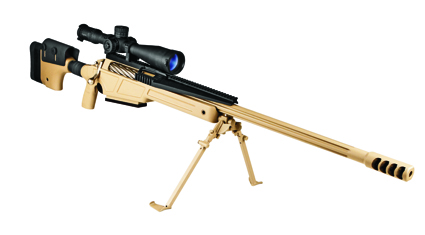 Sig Sauer joins the BMG market with its new Sig50. The gun starts as a Tac50, customized and altered as necessary to remove weight and to provide a look aesthetically in keeping with the SSG 3000 rifles. The same was done with the stock and the changes removed a few pounds from a proven system, to really maintain that Sig Sauer look. At only 23.5 pounds, Sig Sauer has created the perfect blend between lightweight portability and manageable recoil in a .50 BMG. The full-length machined M1913 rails allow for rock solid, repeatable mounting of optics, night vision, bipods and laser designators. Visit sigsauer.com or call 603-772-2302. 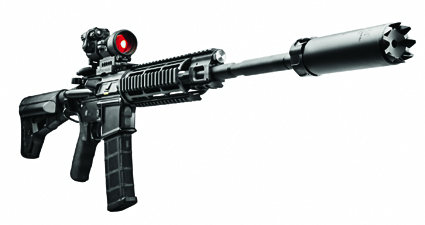 SureFire launches their Mini-Monster suppressor for 5.56 NATO rifle applications where an operator desires the versatility of a sharp-toothed muzzle device. The can weighs 14 ounces and measures 5 inches, plus a 0.25-inch row of teeth capable of shattering auto glass. The can is rated at about 135 decibels from a 20-inch barrel, and slightly higher with shorter barrel lengths. Visit surefire.com or call 800-828-8809.

Remington Defense will soon be offering a 40mm single-shot launcher named the LTL or Less-Than-Lethal Grenade Launcher. Although the immediate market is federal law enforcement, the break-top 40mm has direct applications to state and local law enforcement in the less-lethal category. The launcher has rail systems on the top as well as on both sides of the forearm for the installation of lights, lasers and more. Seen featured with the EOTech grenade launcher holographic sight, a standard red-dot could be mounted for easier shooting while wearing a gas mask in a LE chemical-munitions scenario. The launcher is available now. For more information visit Remington Law Enforcement, remingtonline.com, or call 336-548-8899. 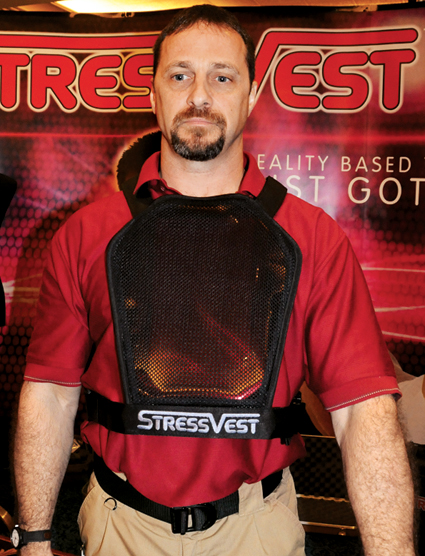 The StressVest teaches LEOs and warfighters how to deal with pain and stress in hazardous situations by delivering a situational-specific pain penalty during reality-based training. It is the world’s first non-projectile, force-on-force, firearms training system capable of creating stress without fear of projectile injury. The system utilizes a training firearm that fires a laser pulse that is read by the vest when it strikes center mass. Depending on the setting, the vest will either deliver a vibration or a safe, localized shock to the abdomen. Unlike projectile systems that make it difficult for role players to determine shot placement, StressVest only acknowledges center mass hits. Visit
stressvest.com or call 204-336-0011.