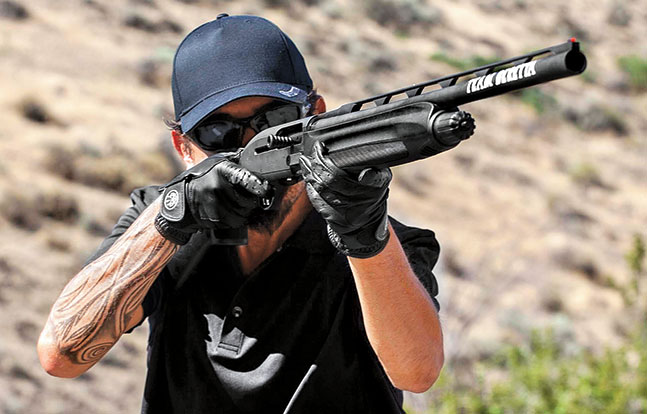 Built with Beretta’s ultra-fast Blink operating system, the semi-auto 1301 Comp can deliver four rounds in less than a second. This shotgun’s ready for competition right out of the box with a 5+1 capacity.
Comment(s)

Competition shooters have gravitated to 3-Gun in the past few years for several reasons: It’s fun and challenging, there are a number of variations, it replicates
practical shooting situations, and it requires a shooter to become familiar, if not an expert, with a variety of firearms. Plus there’s all the cool gear.

Much attention is given to the AR, the 9mm handgun and, in the increasingly popular Open, Outlaw Open and Heavy Metal divisions, 7.62mm battle rifles and larger-caliber handguns. When it comes to the shotgun, many shooters leave it for last, but it can make or break a competition. Lots of shooters started with a lot of gunsmithing and aftermarket products on tried-and-true semi-autos to get them tuned for 3-Gun matches. Today, many smoothbores have enlarged ports for quick reloads, tuned gas systems for fast, reliable cycling and sights optimized for quick target acquisition right out of the box. Here are some of the best available on the market.

When Remington introduced the Versa Max line in 2010, it quickly became a favorite among hunters and shooters of all walks. The Competition Tactical model is based on the Versa Max Tactical and tuned to meet a 3-Gunner’s needs. It features an eight-shot standard magazine with a two-shot, carbon-fiber tube extension for a 10+1 capacity. With oversized controls, a green Cerakote receiver, an enlarged loading port, express dovetail sights and plenty of other features — including the Versaport gas system that regulates cycling pressure based on shell length and provides serious recoil reduction — it’s ready to go right out of the box (remington.com; 800-243-9700)

Already a favorite of 3-Gunners, in 2013 Benelli USA introduced a version of its venerable M2 tactical shotgun fine-tuned for 3-Gun competition. Features include the company’s proven Inertia Driven system that runs cleaner than other gas systems, an oversized bolt release, an extended tactical-style bolt handle, a modified carrier and an enlarged loading port along with HIVIZ competition sights. A shooter couldn’t ask for a smoother-running semi-auto with such a stellar reputation already proven on many ranges and in countless tactical situations. (benelliusa.com)

This semi-auto is designed for competition right out of the box with a quality standard shooters expect from a gun-maker like Beretta. It cycles extremely quickly, with Beretta’s proprietary Blink gas system capable of pumping out four rounds in less than a second. It handles like a shotgunner’s dream and has oversized controls, including the cocking handle and bolt-release lever, as well as enlarged loading and ejection ports. The receiver comes drilled and tapped for rail mounts, and the length of pull is adjustable to conform to individual shooting styles and clothing. (beretta.com)

Similar to how the Saiga and Vepr are based on the AK, the Akdal MKA-1919 is patterned on the AR, which makes it a natural and nearly seamless transition shotgun for 3-Gunners more versed in rifle and pistol shooting. The magazine, bolt release and safety controls are positioned like an AR’s, making reloads fast and intuitive. A super-tuned TAC-12 model from Firebird offers a free-floating barrel and a non-reciprocating charging handle. (firebirdprecision.com; 866-997-0818)

FN has been producing auto-loaders for more than a century. It’s no surprise that the company makes some of the best tactical semi-auto shotguns on the market. The SLP MK I comes from those tactical roots and has the reliability, capacity and components—like a receiver-mounted bolt release, a curved operating handle and a top-mounted cantilever rail—to make it one of the best 3-Gun 12 gauges out there. (fnhusa.com; 703-288-3500)

The Vepr, patterned after the Kalashnikov rifle, ditches the conventional under-the-barrel mag tube and employs a gas-operated, long-stroke piston with a box magazine—and it’s giving the Saiga some competition in the Open Division. For shotgun reloads, it doesn’t get much faster than a detachable box mag. There are several variants of the Vepr out there with different stocks and grips, but they ship from the factory with a full-length top rail. The gun comes with a five-round mag that slides straight into the receiver. (molot-usa.com; 775-200-1678)

When five-time USPSA 3-Gun National Championship winner Jerry Miculek puts his name on a gun, especially one from a company with Mossberg’s reputation for rugged reliability, you know its something to pay attention to. With 10- and 9-shot tube versions and performance-enhancing features like a beveled loading gate, a shorter forend for quicker loading time, an oversized bolt handle and bolt release, and a dual vent gas system making for lighter recoil and easier cycling, the 930 JM Pro is a perfect choice for beginners and experienced competitors alike. (mossberg.com; 800-363-3555)

After 40 years, it’s safe to say that the Model 1100 has proven itself as a rugged and abuse-absorbing autoloader. It stands to reason that it’s a favorite of many 3-Gunners, and the TAC 4 model requires little modification for competition. The controls are familiar, and the platform is flexible with a bevy of aftermarket accessories and parts readily available. (remington.com; 800-243-9700)

The Stoeger M3000 is a versatile, reliable shogun. For that alone it’s suited for 3-Gun competition. The fact that it uses an inertia-driven system and runs clean with only three moving parts makes it even better. Plus, it will fire a range of loads reliably without adjustment. The biggest drawback is its short magazine tube, which only holds four shells. But, like the gun itself, an extension tube is inexpensive and will increase its capacity to 9+1. (stoegerindustries.com)

Pump guns certainly have their place in 3-Gun, especial in Heavy Metal or Open divisions. They can be a bit slower than a semi-auto in unpracticed hands, but there’s no difference in loading speed, and they’re far more reliable in dirt and weather than a gas-operated gun. Following in the footsteps of the Winchester 1300, this SXP comes with all the necessary accessories for competition and runs silky smooth because of its inertia-assisted slide action, which is capable of cycling three rounds in half a second. Its capacity is low, but a mag tube extension solves that problem quickly. (winchesterguns.com) 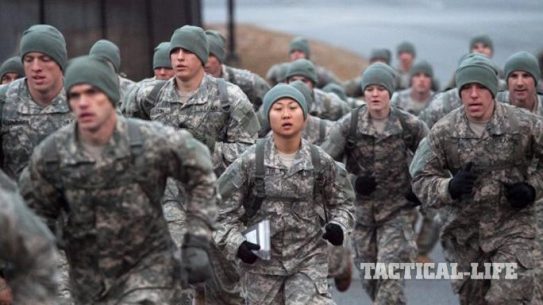 Five women can now move on to the Army's Ranger course after completing the...