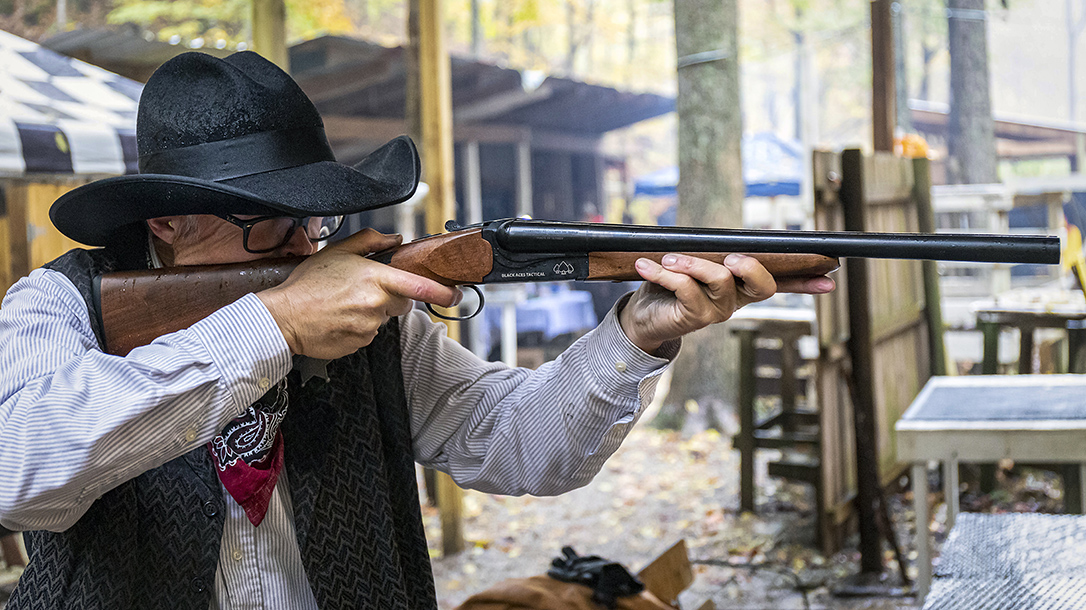 One of the biggest difficulties for beginners competing a new sport is the start-up itself. Many of our pastimes are just plain expensive. If you are yearning to become a Cowboy Action Shooter as a member of the Single Action Shooting Society (SASS), you’re looking at a sizable investment when it comes to guns and gear. 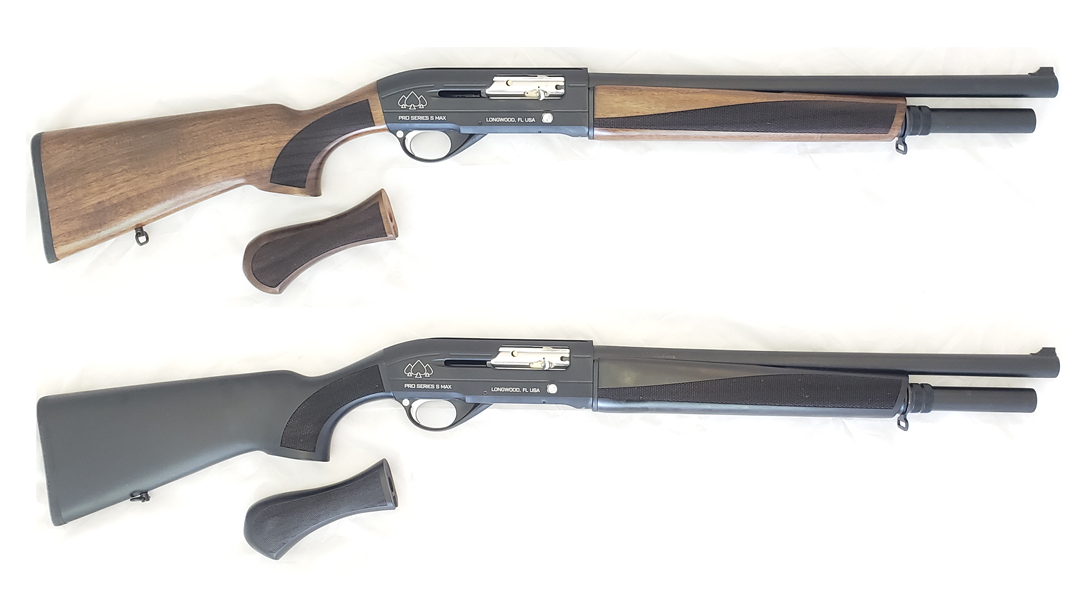 Black Aces Side by Side Shotgun

You can spend a small fortune on things like costumes, gun carts, ammunition and especially the firearms themselves. For a main match you need at least two six-guns, a rifle and a shotgun, and all must be what’s referred to as “SASS-legal.” Some folks start with borrowed guns, then maybe used guns. And there’s always that good deal out there on a new gun with the right price point. This is where Black Aces Tactical comes in.

Headquartered in central Florida, Black Aces Tactical is a veteran-owned American manufacturer that is dedicated to providing quality firearms at an economical price point. Their extensive line includes several types of shotguns: semi-autos, slide actions, over-and-unders, side-by-sides and even a modern lever-action shotgun. I received a press release from the company, and after going over the material on the side-by-side (SBS), I decided to get a sample of the shotgun with the walnut stock and black receiver.

The Black Aces Tactical SBS was delivered in a cardboard box that also included an owner’s manual, a small plastic box with choke tubes and an installation tool, plus a “bear claw” checkered walnut pistol grip, which makes it handy for a compact home-defense weapon. I gave the shotgun the once-over and noted that it is of Turkish origin. I have to give the Turks credit—they do a great job with firearms production. Over the last few years, I’ve tested several guns made in Turkey, and all have been of high quality and represented tremendous value for the money. It looked as though the Black Aces Tactical SBS had the same attributes.

The polish and blue finish on the barrels were well done with no tool marks. The pistol-grip stock was plain-grained but not unattractive and showed perfect checkering. Wood-to-metal and metal-to-metal fit were pretty flawless. A matte finish adorned the receiver with laser-etched Black Aces Tactical logos.

This shotgun is built with Cowboy Action Shooting (CAS) in mind. It has 18.5-inch barrels, a compact overall length of 35.5 inches and an empty weight of 6.7 pounds. One very notable feature is the single trigger, which is gold-plated. Most of us CAS types are used to double triggers, and this took me a little getting used to. Said single trigger has a barrel selection feature. On the top tang, just behind the side-swinging opening lever, is a raised square switch that serves as the safety and barrel selector.

With the switch to the rear, the gun is on “safe.” In this position the switch can be moved left or right to select which barrel you want to fire first. To the left, you shoot the left barrel; to the right, the right barrel. With the switch fully forward, the gun is in the “fire” mode, and the barrel selection is locked in. Each pull of the trigger will fire the appropriate barrel selection. This goes hand in hand with the interchangeable choke tubes that let you have it your way. If, for example, the first shotgun target is far out there, you might want to select the barrel with the tighter choke to fire first.

Other notable features include chambers that allow use of either 2¾-inch or 3-inch shotshells. In addition to the laser-etched logos on the sides of the receiver, there is light engraving on the bottom of the triggerguard and on the opening lever. A somewhat thin rubber recoil pad is on the buttstock. The forend is just wide enough, but is not of the “beavertail” variety. Atop the barrels is a rib that forms a shallow trough that makes it easy to get the brass bead front sight on target quickly. As required by SASS rules, the SBS has shell extractors that lift out empty shells, but no ejectors. Like any new break-open shotgun, the new SBS was tight when swinging down the barrels to load, but this will loosen with time and use, or you can spend a few bucks and have a gunsmith loosen it up a bit.

I was a little less prepared for this testing and evaluation (T&E) than I usually am. While I normally begin with some range work, as my schedule worked out I had a cowboy shoot come up before I could get the shotgun out to the range. My local SASS club changed the date of their November shoot due to the impending deer season. And the match at the other club I shoot with was just a couple of days away before I realized it.

The day of the shoot, it was both chilly and raining. Wet and cold conditions can be challenging all by themselves. Then add in shooting a new shotgun for the first time. I knew what to expect with the tightness while breaking open the Black Aces side by side for loading and unloading, so this was uppermost in my mind. From looking at the choke tubes in the muzzles, it appeared that the left-side barrel was a modified choke and the right-side barrel a full choke, so I left the barrel selector in the left-then-right barrel position.

My next mistake was with shotshells. Admittedly, most of the shotgun testing I do is with what I refer to as “social shotguns.” That being the case, most of ammo I had was various buckshot and slug loads. I ended up taking some recently acquired Fiocchi HV 2¾-inch 12-gauge shells with No. 7½ shot. My other 12-gauge shotshells were of pretty ancient vintage and stayed on the shelf of my ammo locker until range day.

Despite the awful weather, we still had enough shooters to form into three posses for the competition stages. LaVista Bill’s posse was assigned to started on Stage 2, which included a running buffalo steel target. The shooting stages were for the most part covered with a corrugated steel roof held up by posts, but the sides were open, and walking from stage to stage allowed shooters and guns to get pretty wet. Getting four wet guns and ammo up to the loading table was interesting, and necessitated extra care.

As expected, the Black Aces Tactical side-by-side was tight. Of course, per safety regulations, shotguns must have the actions open or barrels broken open and then be loaded on the clock. Match adrenaline was helpful for shoving in the shells and snapping closed the barrels. Thankfully, this shotgun doesn’t have an automatic safety to contend with. You place the selector switch “off safe” or “F” and it stays put. I do wish that the letters “S-F-L-R” etched into the tang were easier to see. Making selections in subdued lighting would be much easier.

I experienced no difficulty in shouldering the shotgun and getting the sights on target quickly. The high-brass shells gave me a good booting, but nothing painful. I guess what some people call “muscle memory” proved problematic: After my first shot, my finger went back to that nonexistent second trigger, which was actually the rear portion of the triggerguard. This quickly reminded me to put my finger back on the single trigger and pull it again.

Stages with more than two shotgun targets required breaking open that stiff action, dumping the spent shells and loading fresh ones. Since most shotgun targets are the falling type, the targets must fall or it counts as a miss. Finally, the shotgun has to be unloaded and the empty shells removed on the clock. Turns out I didn’t do too badly. The tight action might have added a few seconds, but I didn’t drop any wet shells or miss any falling targets, so the practical test of the Black Aces Tactical SBS shotgun went rather well.

Of course, the next day was sunny and beautiful, so I grabbed the shells I had on hand and headed to the outdoor range where I do most of my testing. Besides the Fiocchi 2¾-inch, No. 7½ loads, I also had an ancient box of Winchester-Western low-brass No. 8 loads and some all-plastic No. 8 standard-velocity 2¾-inch “dove & quail” shells from Eclipse, a company that produced shotshells years ago. To shoot some patterns, I used some B-27 targets from HD Targets. The pellet strikes on these targets show up as outlines surrounding the pellet holes. The target area is about the same size as the smaller knockdown shotgun targets used at CAS clubs.

My test protocol was to set up two of the targets side by side at 10 yards. I fired first the left barrel, then the right barrel at the corresponding targets. The point of aim was a small orange hexagon with a black “X” in the target’s center. Point of aim/point of impact for most of the patterns was just above the center hexagon aiming point. All the patterns with the Eclipse and Winchester-Western shells produced a pellet-chewed “rat hole” within an inch or so of the point of aim.

The tightest and most uniform pattern was actually made by the standard-power No. 8 Eclipse shell, fired from the shotgun’s right-side barrel. The best pellet dispersal, yet still within the confines of the target, was the Fiocchi No. 7½ load out of the left-side barrel. None of the patterns were really deficient in any way, which accounts for why I had no misses at the cowboy match.

Black Aces Side by Side: Final Notes

During two different testing sessions, I had no malfunctions or hiccups of any type with the Black Aces Tactical shotgun. It worked just as well wet and cold as it did warm and dry. It had excellent pointing characteristics and was fast on the target. And once it gets broken in, it will be easier and quicker to load and unload. The reliability, quality and good looks are all there.

Like all doubles, it was a cinch to disassemble and clean. I had to take it down to get the water out, and the large latch on the bottom of the forend was easy to pull down in order to remove said forend. You then break open the action and pull the barrels off the receiver. Reassemble it in reverse order. I could easily imagine this well-made and budget-priced Turkish scattergun becoming a part of my CAS battery of firearms. For more information please call 407-906-9823 or visit blackacestactical.com.

Black Aces Side by Side Specs

This article is from the Guns of the West magazine. Grab your copy at OutdoorGroupStore.com. 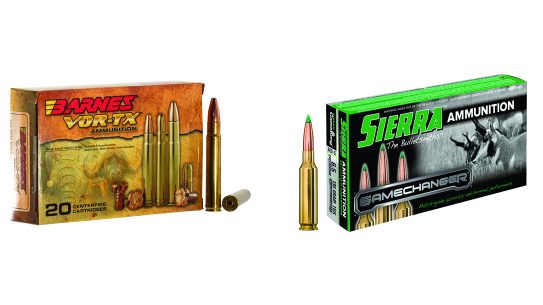 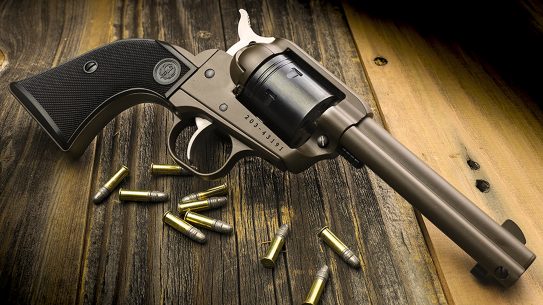 Cowboy Up With the Davidson’s Exclusive Ruger Wrangler Revolver