“Godless” is a seven-part Netflix miniseries written and directed by Scott Frank and produced by Steven Soderbergh. The story centers on an outlaw, Roy Goode (Jack O’Connell), who is a member of the Frank Griffin (Jeff Daniels) Gang. The opening scene starts in Creede, Colorado, in 1884, and depicts the town littered with bodies, burnt and shot. In the distance, a train has derailed and overturned. A woman in a state of shock is kneeling next to a man’s body. As she mournfully sings, her song echoes through the town, and as the camera pans out, we see Marshal John Cook (Sam Waterston) looking up at a young boy who swings from a rope, hanged by the neck. 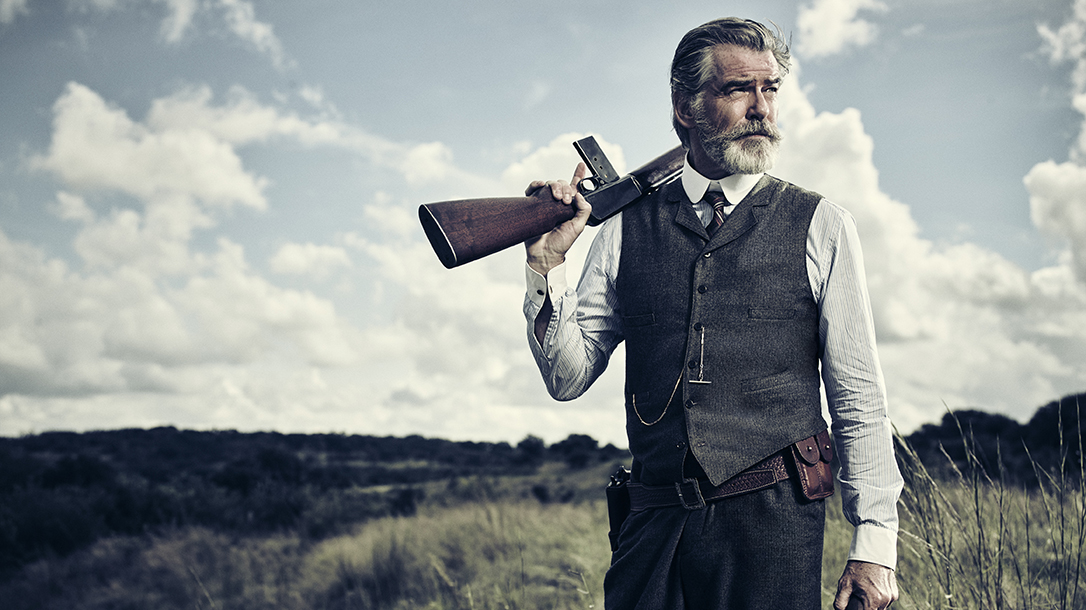 The next scene depicts a man riding on a horse at night. The rider comes to a ranch near the mining town of La Belle, New Mexico, and we learn that it is our main character, Roy Goode. The ranch belongs to a widower named Alice Fletcher (Michelle Dockery). Finally, we learn that the chaotic opening scene is the result of a train robbery gone wrong—a result of Roy Goode turning against Frank Griffin during the attempted robbery. Frank and his gang of outlaws then murder all of the townspeople in Creede after they kill two of his gang members. Roy Goode, wanting to change his outlaw ways, seeks refuge in the town of La Belle, were he works for Alice Fletcher on her ranch as a wrangler.

One of the twists in the storyline is that La Belle suffers a tragic mining accident when 83 of the town’s men are killed. As a result, the remaining population of La Belle is predominately female.

The storyline and characters in “Godless” are developed slowly, giving us time to really get to know them and their relationships. But, as seen in countless productions, “Godless” has not omitted the stereotypical or cliché roles. The ubiquitous knife-throwing character is no exception. Every time this character throws a knife, someone is killed instantly. No one ever reels in pain or rolls around on the ground for minutes to hours before bleeding out. But looking past the clichés and 21st century ideological correctness, the actors in “Godless” provide convincing and solid portrayals in outstanding period-correct costuming. Jeff Daniels plays his best role yet, making a convincing 19th century outlaw. Overall, the series provides good entertainment with a good storyline and plenty of gunplay for us Western enthusiasts.

In fact, in terms of firepower, “Godless” did a commendable job with the gun choices and casting of the firearms. Well, after the opening credits, that is, as the guns shown at the beginning aren’t historically accurate for the time setting of the 1880s. You’ll notice a Smith & Wesson Hand Ejector revolver, a modern over/under shotgun with a tang safety,and yet another S&W Hand Ejector. But don’t worry—as the series goes on, the gun casting gets better.

In the first episode, Frank Griffin (Jeff Daniels) uses a Remington Model 1875 revolver, which would’ve been quite appropriate for 1884. Frank James was reported to have used this type of revolver during his criminal career. The Remington was a well-designed handgun with a solid frame; it wasn’t nearly as popular as the Colt Peacemaker or Smith & Wesson Model 3. The Remington was a formidable design that unfortunately didn’t have production numbers to make it more common. But it was nice to see a Remington 1875 here instead of the ubiquitous Peacemaker.

Of course, plenty of Colt pistols show up in “Godless.” In the fifth episode, a flashback shows Frank giving Roy a Colt 1872 Open Top revolver. This makes sense, as cap-and-ball conversions were plentiful from 1871 well into the 1880s. Many conversions ended up on the frontier as Civil War veterans kept their sidearms and moved west after the war. But Colt couldn’t create a bored-through cylinder until 1871, when the Rollin White patent expired. When the time finally arrived, Colt knew it needed to capitalize on the opportunity. It immediately took old cap-and-ball pistols and added a firing pin conversion ring; a bored-through cylinder; and an ejector rod, converting these guns into cartridge-firing revolvers. The company began offering such upgrades for only $8, a bargain for customers—especially the relatively poor moving westward.

It wasn’t long before Colt released the Model 1873 Single Action Army, aka Peacemaker, which is undoubtedly the most recognizable “cowboy” pistol in the world. You can’t have a Western without one being cast. Whitey Winn (Thomas Brodie-Sangster) carries two 5½-inch barreled Peacemakers in the series. He appears to enjoy the Colts, spinning them frequently, and he ends up using the pair of revolvers as early as the second episode. He puts on a very respectable display of gun handling and marksmanship during a scene confronting two cowboys on horseback in town. His cool and calm demeanor might lead you to believe he has great promise—a shootist similar to a young Billy the Kid—but as the series progresses, his persona diminishes.

In the final episode, “Homecoming,” the writers have Winn display a ridiculous lack of common sense as he walks out to a gunfight and gets killed by the cliché knife-throwing character. It’s one of the worst scenes in the series.

Smith & Wesson top-breaks were extremely popular in the Wild West, with the exception being the Schofield model, which had a very short production run. Only 8,969 Schofields were produced; they all had 7-inch barrels. Most of these guns were sold to the military; only 650 of them entered into the commercial market. It wasn’t until the 1890s that the Schofield model found its way into service outside the military. Most of these surplus pistols were purchased by Wells Fargo, where they were modified for agents and messengers. The barrels were typically cut from 7 inches down to 5 inches and refinished in nickel. Marshal Cook’s gun looks very close in appearance to a Schofield, but with the barrel cut shorter.

This is also true for the 5-inch-barreled S&W Model 3 used by Callie Dunne (Tess Frazer). Pinkerton Agent Webster (Nathan Darrow) uses a Russian model; seeing these guns being loaded makes for some authentic excitement during gunfights.

“Godless” did cast a gun rarely seen in Western movies, and it was quite popular with police departments on the East Coast during the 19th century: the Merwin Hulbert revolver. Merwin Hulbert was a subsidiary of Hopkins & Allen, another firearms manufacturer in the 19th century. This gun used a unique and innovative design that allowed the user to rotate the barrel 90 degrees. The user would then pull the cylinder and barrel assembly forward, allowing the revolver to eject the fired casings and retain the loaded ammunition in the revolver’s cylinder. The user could close the action and then load the revolver through the rear of the bored-through cylinder.

Merwin Hulberts were considered to be excellent-quality revolvers; the company manufactured them with incredibly tight tolerances during their production years. Merwin Hulbert produced five models from 1876 until 1916. The Frontier and Pocket Army were designed to compete against the Colt Peacemaker, S&W Model 3 and Remington Model 1875. In “Godless,” the Merwin Hulbert revolver was cast in a great scene in the seventh episode where Samantha Soule (Charlotte Temple) and Mary Agnes (Merritt Wever) are preparing for the Griffin Gang to arrive in La Belle. Callie shows Samantha how to load a Merwin Hulbert. I’m sure many viewers missed this detail, but to a Western enthusiast, incorporating a real 19th century revolver made the scene very interesting and believable.

“Godless” also showcases some rifles of the 19th century. Alice Fletcher (Michelle Dockery) puts a Henry rifle to good use when Roy Goode shows up unannounced at her ranch at night. Although the Henry was very desirable during the Civil War, by 1884 this rifle would have been 19 years old and considered somewhat obsolete. The rifle’s .44 Henry ammunition was slow, light on energy and had limited range. By comparison, the Winchester rifles of 1873 and 1876 fired cartridges that were far more powerful; thus, the guns were considered superior in design. 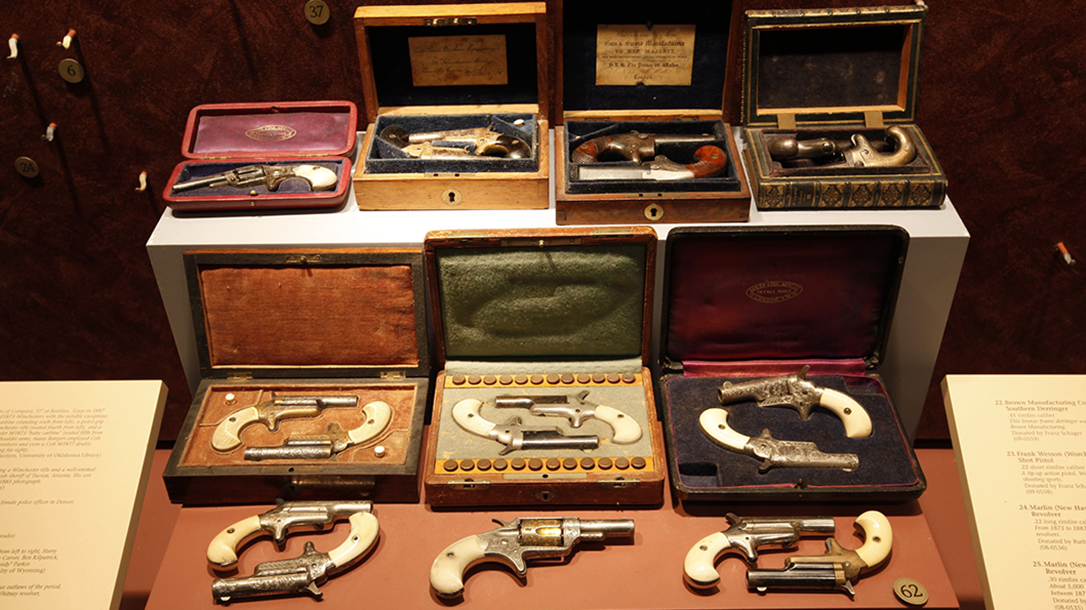 Roy Goode wields a very period-correct Winchester 1873 carbine in a scene that sets the stage for the rest of the narrative. This Winchester was extremely popular among those who worked on horseback, especially lawmen like the Texas Rangers. Another great Winchester used in “Godless” is the Model 1876 used by Mary Agnes. The Winchester 1876 was truly America’s first repeating rifle to utilize a substantially powerful line of cartridges in the American West. Settlers had a real need for a repeating rifle with this capability. In the Western territories, people were still battling with large predators of the two- and four-legged persuasion.

“Godless” is full of duels to the death and vicious hatred. The beauty of the landscape captured in this series contrasts nature’s peaceful state with that of the evils of man. Although Scott Frank at times lets some of the cliché characters and progressive agenda drag down the narrative’s drive, Jeff Daniels’ commendable performance, with his commanding authority and brute force, manages to hold the series together. His character, Frank Griffin, is tempered by a contemplative perspective regarding religion as he falls from grace. In the end, this series is a potent and sizable achievement that provides entertaining gunplay.

This article was originally published in “Guns of the Old West” summer 2018. To order a copy and subscribe, visit outdoorgroupstore.com.