1
SHARES
1.4k
VIEWS
Share on FacebookShare on Twitter
Homeowners that have decided to utilize a reduced size firearm for defense have also had to make the decision between comfort and maneuverability. Famed shotgun builder Mossberg was never completely on board with that theory and at the 2019 Athlon Outdoors Rendezvous we had the opportunity to spend a little time with them on the range. Along with its new MC1sc pistol and its hit shockwave scattergun, we were able to get our hands on the Mossberg 500 ATI Tactical shotgun. The ATI Scorpion kit has been available for a few years, however due to its popularity Mossberg decided to offer it straight from the factory in this configuration. 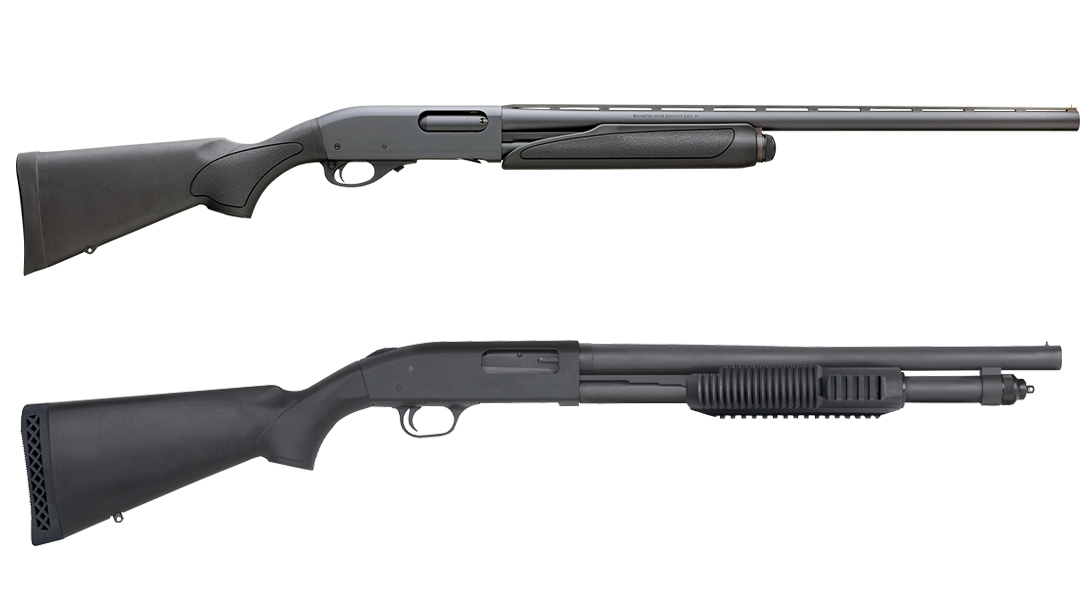 The Mossberg 500 ATI Tactical starts life as a standard Mossberg 500 defensive shotgun. This shotgun wears a reduced 18.5-inch barrel that is designed to increase maneuverability in small areas such as inside the home or inside of a cruiser. Protecting the shooters hands is a free floating heat shield that allows for a variety of burn free holds during firing and reloading.

Out in front we have a wing-protected front sight post. The standard front brass bead also remains, should you wish to remove the iron sights for a more traditional configuration. However if you decide to leave the post where it is, the top of the receiver comes with an attached Picatinny rail that doubles as a fixed rear sight, aiding in the accurate placement of slugs. More Picatinny rail can be found just forward of the forearm, making it the perfect attachment point for a flashlight or laser.

While the hardware is impressive, it is the “software” that makes this trim package stand out. Available in flat dark earth or destroyer grey, the ATI stock set is not only functional but it is sure to turn heads at the range. The rubberized pistol grip makes recoil very manageable, as it takes some of the thump off of the shoulder and places it into the palm of the hand. Here it is further reduced by the recoil absorbing back-strap, making it very easy to spend elongated practice sessions on the range. Up front the ATI Scorpion kit utilized a rubberized fore grip, offering smooth, secure operations as well as some vibration absorption. The ATI shotgun package also brings comfort to the shooter via a six-position collapsible stock that adjusts not only for length of pull, but comb height as well. 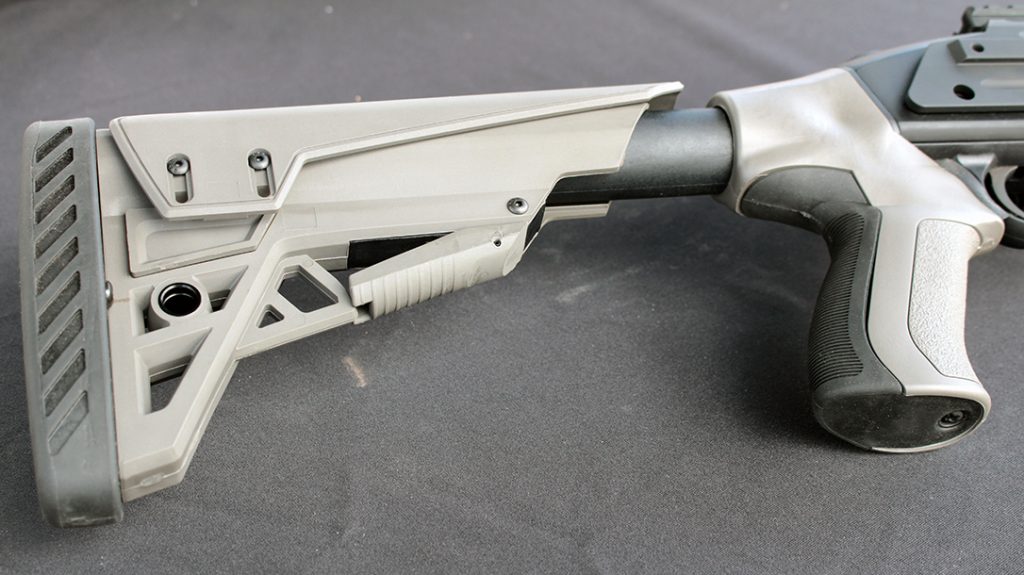 On the range we sent nearly 100 rounds of birdshot at a short-range falling plate rack and multi-distance static steel targets. The compact package still allowed for a total capacity of six shells, leaving you enough ammo to run a standard plate rack, as long as you do your part. The stock holds extra ammo in the 3-5 shell carriers attached to either the left of the right side, allowing this feature to be ambidextrous. While loading we noticed that capping off the magazine tube was a sling stud, should you want to attach you favorite two-point sling. Single-point fans will find a QD point built right into the stock.

As we stretched it out we found the cylinder bore barrel to provide effective patterns out to 15 yards with our light target load ammo; controlled flight rounds or buckshot will likely extend this range. Overall function was impeccable, even despite rapid fire sessions which are classically prone to short-stroke malfunctions. The new package also performed flawlessly through the unexpected snowstorm that passed through smack in the middle of our range session.

Mossberg’s new marriage with the ATI Scorpion stock kit gave us plenty of joy on the range. Furthermore, it took away some of the pain often associated with shooting a pump-action 12 gauge. The total package only carries an MSRP of $588, putting it in most homeowner’s budgets.