In the world of competitive shooting, minuscule portions of a second can often determine winners and losers. Physical ability and a trained mind are critical to success but on par with those are guns and gear built for speed. Many companies cater to the competitive shooting industry and produce exceptional weapons. What is not well known outside of that arena is that even these high-end guns are often further modified by the shooters themselves. Some minor tweaks and some on a larger scale. 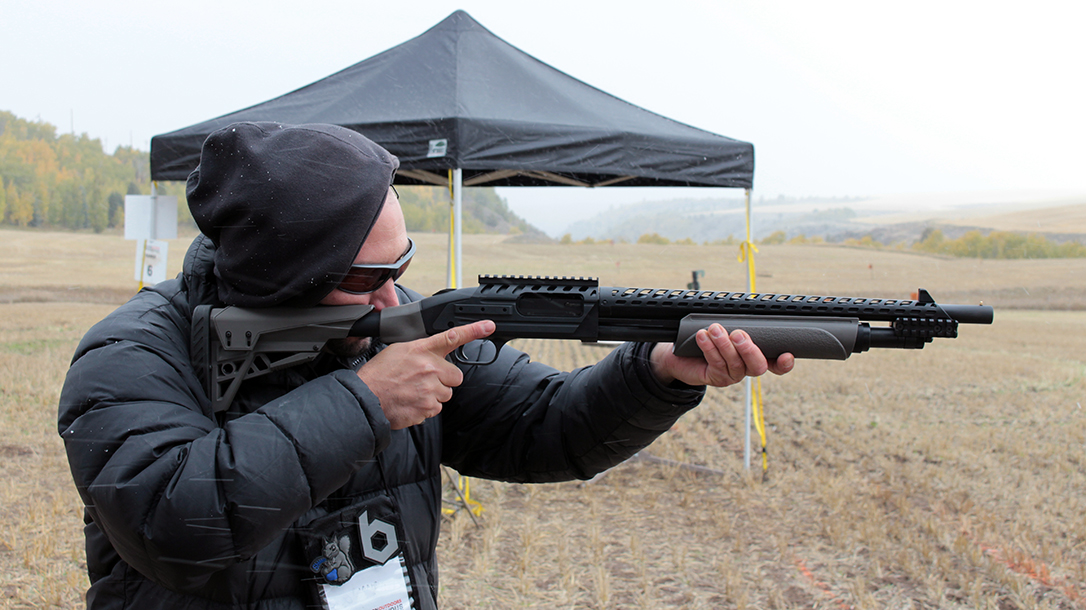 A name that is synonymous with premier competitive shooting is Miculek. The entire family are competitive shooters, but Jerry and Lena seem to find themselves in the limelight most often.  As members of team Mossberg, they have access to some of the finest engineers and designers in the industry and yet they themselves are masters at modifying guns to fit their needs.

An idea was born inside Mossberg that maybe they could get a look at just what Lena and Jerry have done to their Mossberg shotguns and then they could replicate it. In short order they sent their highly modified blasters into the engineers and, while nobody will confirm it, I’m pretty sure they said, “Oh my God … what did they do to our guns?” Well, after the dust settled the genius of their work became apparent and the team went to work to replicate it. The goal was an out-of-the-box gun that had all the features and mods that the dynamic duo of Jerry and Lena enjoyed. After extensive work they cracked the code and have now released the Mossberg 940 JM Pro.

The 940 JM Pro is a semi-auto shotgun that has a new durable gas system which allows for up to 1,500 rounds between cleanings. This is a major jump for those of us who have a love-hate relationship with their 930s. They simply needed to be cleaned constantly. While maintenance is still critical, the time between cleanings has been drastically improved. The gun also has nickel boron-coated internal parts for smooth operation, and a competition-level loading port, elevator, and follower. Outside, an adjustable stock and streamlined forend sport Mossberg signature texturing, while a host of stylized, functional components combine for competition—to optimize speed, accuracy, and durability.

Other great high-end features include an adjustable length-of-pull stock. The competition-ready stock is user-adjustable for LOP (1 .25-inch range), and adjustable for drop at comb and cast using incremental stock shims. Aggressive Mossberg signature texturing adorns the grip and the slim, ergonomic forend. One feature that is especially nice is its ability to support quad-loading. For those unfamiliar with the concept, it is a technique where a shooter grabs four shells and then sequentially speed loads them, two at a time, into the gun.

I had the pleasure of working with Lena Miculek on this technique during the Mossberg event at Gunsite. Let’s just say that while I understand it, it will be some time before I master it. The gun has an enlarged and beveled loading port, which was specifically configured to support this technique. It also has an anodized, bright orange follower, and an elongated, pinch-free elevator. For those of us who have donated way too much skin to painful elevators, I will just sum it up and say, “Hallelujah.”

Lastly, the guns have an oversized and contoured charging handle and bolt release button to provide quick manipulation. The Briley extended chokes put pellets right where you want them, while the HIVIZ front fiber-optic sight gets you on target faster. While all these features are incredible in and of themselves, the first thing you will notice is the look of the gun. And it is a good-looking gun! The guns we ran during our time at Gunsite were anodized in tungsten grey and had gold accents on the charging handle and bolt release.

On the range, the guns performed as good as they looked. The gun is fast and accurate. It has steel-to-steel bolt-to-barrel lock-up and the trigger was smooth as silk. I found the HIVIZ sights easy to use, but Mossberg has also drilled and tapped the receiver in case the shooter wanted to add optics or accessories.

I ran a variety of ammo through the gun ranging from low-power bird shot to slugs and I never had any issues at all. This is a plus for people that like to spend a lot of time on their gun. Being able to run some lighter loads makes life a little more enjoyable. Right now, the guns are available in both a 24-inch barrel, 9+1 round and 22-inch barrel, 8+1 round configuration. Rumor has it that there will also be something for the home defense market as well in the future.

Those who follow me or know me personally know that I am not a competition shooter. What I am though is a hardcore practical shooter that appreciates accuracy and reliability. Mossberg has hit these points in spades with the new 940 JM Pro. You do not need to be a world class shooter to utilize this gun. In fact, I believe those who aren’t world ninja shooting champions will appreciate it most. This is because the new 940 put the same gun in our hands that the real-world champions are running. It can also be done without breaking the bank. MSRP is $1,015.

If you are a seasoned competitive shooter looking to gain an edge, you would be well served to give the new 940 JM Pro a long look. For more information, please visit Mossberg.com.