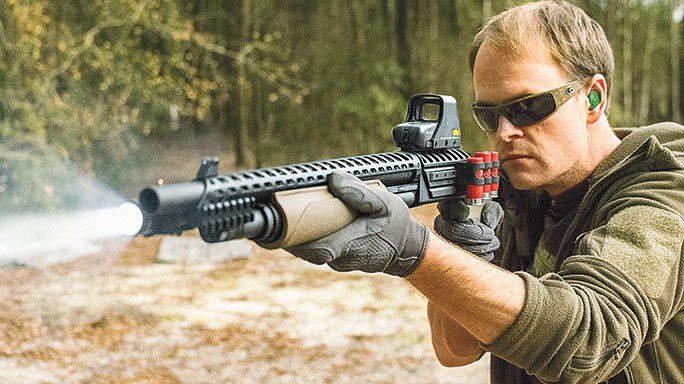 1 of 2
Venom Strike: Mossberg’s ATI Scorpion Shotgun
The Scorpion has an ATI heat shield, accessory rails and a top rail for mounting sights. 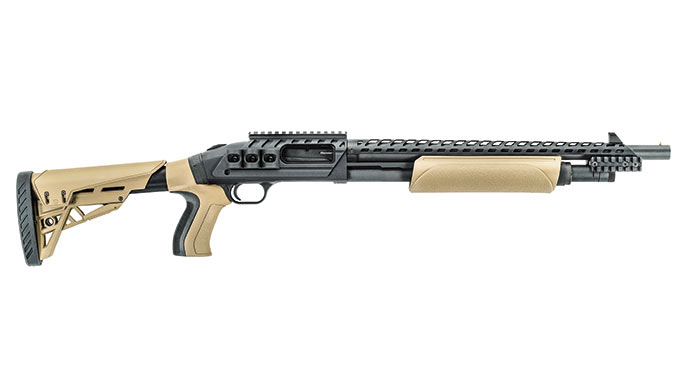 2 of 2
Venom Strike: Mossberg’s ATI Scorpion Shotgun
Mossberg’s 12-gauge ATI Scorpion is packed with several performance-enhancing upgrades, including an ATI TactLite stock, which helps absorb recoil with its thick buttpad and allows shooters to customize the shotgun to better fit their needs. 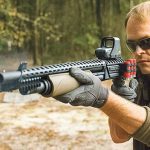 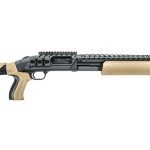 Twelve-gauge, pump-action shotguns have a reputation for three things: reliability, power and punishing recoil. The first two characteristics are why these types of shotguns have found their way into countless police cruisers, armored cars and the homes of anyone in need a powerful, simple solution for self-defense.

The third reason is why many people who own a pump-action shotgun tend not to shoot it much. Some masochists like myself enjoy guns with tremendous recoil and actually look forward to running them, whereas shooters like my petite wife are on the opposite end of the spectrum. So it was totally understandable that she was apprehensive about the new Mossberg ATI Scorpion that showed up at my FFL dealer, though she was in for one hell of a surprise.

Despite its desert arachnid moniker, the Scorpion has very little sting—at least to the shooter. Based on the trusted Mossberg 500 design, the Scorpion incorporates desirable custom features and ATI’s recoil-absorbing furniture to create the ultimate self-defense scattergun.

Gear-loving shooters need only glance at the ATI-equipped Mossberg to realize it’s a modular menace designed to meet the needs of both tactical and civilian shooters. For instance, the Scorpion ships with a Picatinny rail accessory mount just behind the muzzle, which is ideal for adding tactical lights and lasers. Of course, lights are a key component to defensive shotguns; identifying a target is crucial to determining if it’s a threat and, if so, successfully engaging it.

Above the accessory rail segments is an aluminum heat shield that runs from just behind the front sight post all the way to the receiver. The shield has two functions: it keeps a blazing hot barrel away from a shooter’s delicate hands and gives the Mossberg a more aggressive appearance. It’s not my personal favorite addition to shotguns in general, but this particular unit doesn’t weigh much and doesn’t affect performance, so I can’t complain.

Farther back is one of my favorite additions to the classic Mossberg 500 design: an integrated Picatinny rail for optics and sights. While I tend to use most of my personal shotguns without optics, I can certainly appreciate the option’s availability. While veteran shotgunners tend to prefer bead sights for their speed and simplicity, optics are tremendously beneficial in the hands of novice and competitive shooters alike for good reason.

Rapidly identifying and successfully hitting targets is difficult under ideal conditions. If you’re running against the clock or defending your home, adrenaline will make doing so infinitely more troublesome. A good way to make targeting easier is to simplify the task. Adding a holographic or reflex sight allows a shooter to remove one more element in the complex ballistic ballet of running a pump-action shotgun under stress.

Of course, the most difficult aspect of running any shotgun is keeping it fed. No group is more familiar with the intricacies of rapidly reloading a tube-fed shotgun like 3-Gun competitors. The one area of performance that sinks the greatest number of shooters is shotgun reloading. This is due to two different elements that come into play when running the shotgun.

The first element deals with the hand-eye coordination and dedicated practice necessary to quickly shuffle spare shells into the loading gate of a shotgun. Shells are often slick and difficult to handle while your hands are shaking, sweaty or both.

The second is a major mindset shift for shooters accustomed to magazine- fed rifles. In general, most shooters run magazines until they’re empty, then replace the magazine with a fresh one. Sometimes they’ll do a tactical reload between stages, but for the most part, they will run a gun until it’s empty.

With a pump-action firearm, this means having to modify the manual of arms and going through additional steps to reload. Thus, shooters have to adopt the mindset of topping off the magazine tube whenever the opportunity presents itself. For competitors, this means keeping spare ammo handy in shell carriers, but this generally isn’t practically feasible for home-defense users.

Mossberg clearly understands this dilemma, which is why the ATI Scorpion includes a sidesaddle shell carrier that keeps three additional shells handy. While rifle-shooters might scoff at such a small reserve of extra ammunition, shotguns tend to carry less than five rounds of ammo, so having three additional shells at the ready increases the available ammunition reserves on or in the Mossberg significantly.

The Mossberg 500 ATI Scorpion boasts an internal magazine tube capacity of five rounds. Larger-capacity magazine tubes are available, but to install them a shooter will need to replace the barrel with a longer one. This is because the current magazine tube is only a few inches shy of the muzzle, and any additional length could potentially be damaged by muzzle blast.

As for the receiver, it’s a standard, overbuilt Mossberg 500 that will tolerate thousands and thousands of rounds without quitting. The keen heat shield, sidesaddle and optics rail aren’t the only things different on this mighty Mossberg. Even though they address most of the shortcomings of running a pump-action shotgun, they ignore the biggest one of them all: recoil. That’s where the Flat Dark Earth ATI furniture comes into play. Made of ultra-durable polymer, the Scorpion’s furniture is what visually separates it from the rest of Mossberg’s product lineup. Not simply due to its unique color, but also the modern sporting rifle-inspired design.

The forearm consists of two molded halves adhered together, with a stippling pattern covering most of it. This pattern assists the shooter by giving them a better grip, which is crucial on a pump-action shotgun. This is doubly true if the grip is wet, oily or if the shotgun experiences a malfunction.

Farther back is the seemingly innocuous pistol grip. Before I had a chance to actually handle the Scorpion, I dismissed it as a pseudo AR-15-type pistol grip and thought nothing more of it. Once I had the Scorpion for testing, however, I realized that the rear portion of the grip is made of a soft, elastic polymer. This is a huge improvement for helping absorb some of the shotgun’s 12-gauge recoil.

The ATI T2 TactLite stock is adjustable to six different length-of-pull positions and has a Scorpion recoil-reducing buttpad as well as a 1-inch-adjustable cheek riser. Other invaluable additions are a sling-mounting point above the grip and the QD socket ahead of the recoil pad. While not the most exciting thing in the world, these areas provide much-needed mounting points for single-point slings and bandoliers. So if a shooter intends to use their Mossberg in anything other than a static environment, having an option to free up a hand to open doors or manipulate light switches is much easier with a sling.

In testing, the Mossberg ATI Scorpion’s 18.5-inch, cylinder-bore barrel did a great job of controlling the shot’s spread without making the entire shotgun unwieldy indoors. I used several loads in testing, and they all performed very well.

As expected, the Mossberg shotgun encountered no malfunctions of any sort. This might seem like a no-brainer for a manually operated firearm, but sometimes shooters can accidently short-stroke the pump, causing failures to feed. This malfunction normally occurs when the action is worked too feverishly or without sufficient force.

To make sure the ATI Scorpion was reliable under extreme situations where the user is firing it as fast as possible, my test crew and I pitted it against an MGM Targets Competition Plate Rack. Here the testers and I ran various defensive loads against a Pact timer set at a random interval.

My petite wife had no issues manipulating and reloading the Mossberg after a dozen or so practice reloads. This is remarkable, as normally even youth-sized shotguns are a little too long for her petite, sub-5-foot frame. This is thanks to the ATI collapsible stock, as it allows the length of pull to be adjusted to various lengths.

Additionally, the stock’s adjustable length assisted her in controlling the scattergun’s recoil. Any shooter who’s run an oversized shotgun knows all too well how much felt recoil they can generate. With the Mossberg adjusted to her size, my wife was blasting the plate rack with authority in no time at all.

The one issue for me on the Mossberg is its safety, or, more precisely, its location. While very positive and difficult to accidently hit, it’s in a less-than-ideal location for a pistol-gripped firearm. My personal competition shotgun, a Mossberg 930, doesn’t have a pistol grip for this very reason. Located at the top of the tang on the shotgun, the safety slider requires a shooter to either remove their firing hand or utilize their support hand to actuate it.

But this isn’t a deal-breaker; shooters simply need to train themselves to always use it. Unfortunately, it’s integral to the design and can’t be swapped for one located on the triggerguard or closer to the pistol grip. Still, the Mossberg isn’t a concealed-carry weapon, so shooters won’t have to draw and disengage the safety in one motion. In other words, the safety shouldn’t be a big concern and becomes second nature after some dedicated training time.

After running a case of Winchester Win3Gun birdshot through the Mossberg and a dozen or so boxes of various defensive buckshot and slug loads, I have a newfound appreciation for the shotgun. As a traditionalist, I was quick to scoff at the ATI Scorpion’s overly “tacti-cool” appearance. But now that I’ve had time to run it hard without any sort of cleaning or lubrication, I can appreciate both its reliability and ergo-friendly furniture.

With an MSRP under $600, the ATI Scorpion packs in a great deal of value both in terms of the core firearm itself and the included accessories. Heck, if a shooter were to purchase a barebones Mossberg 500 and the ATI furniture separately, it would cost them an extra $100 over this MSRP.

So whether your ideal shotgun is hand-blued with high-gloss walnut furniture or decked out in rails with optics, a light and a laser, there’s no denying that the Mossberg ATI Scorpion represents a phenomenal deal for shooters in need of a simple home- defense solution. It might not win any beauty pageants, but if you’re in need of a versatile firearm capable of running any 12-gauge round it can chamber, and you don’t have $1,000 to burn, the new Mossberg ATI Scorpion won’t disappoint. 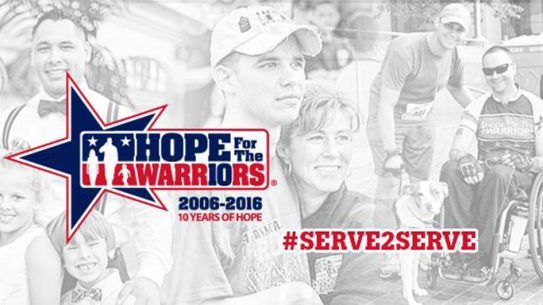 The Hope For The Warriors raffle, ran by Ashbury Precision Ordnance, features 10 raffles...