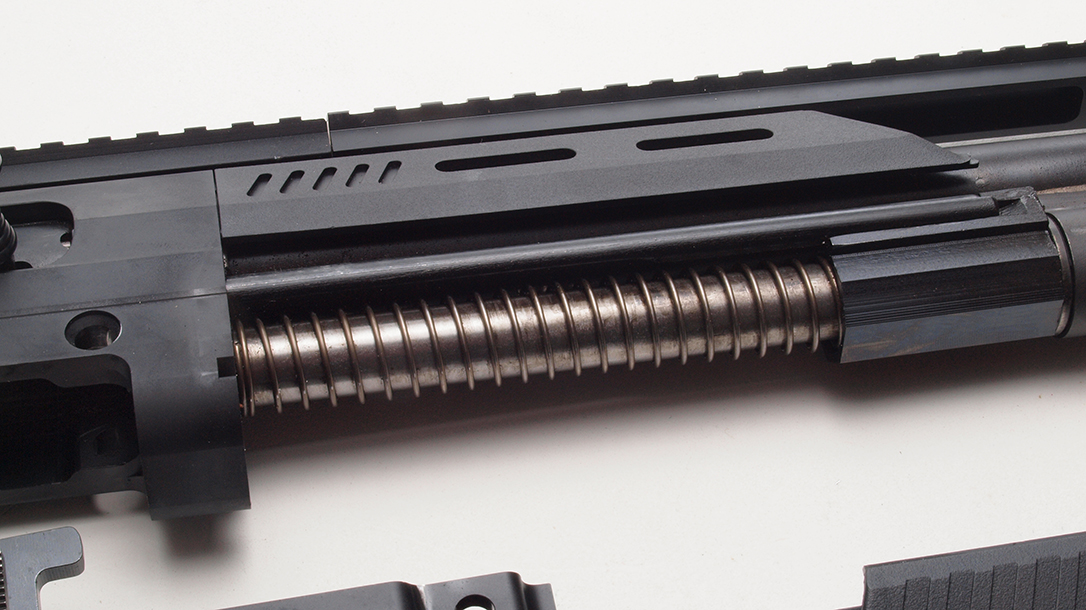 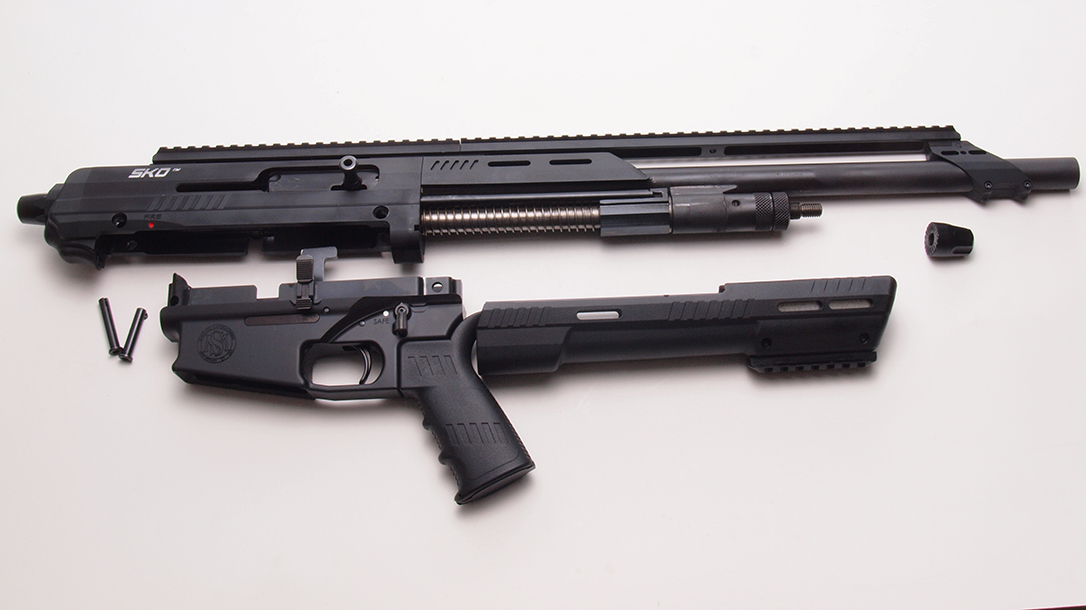 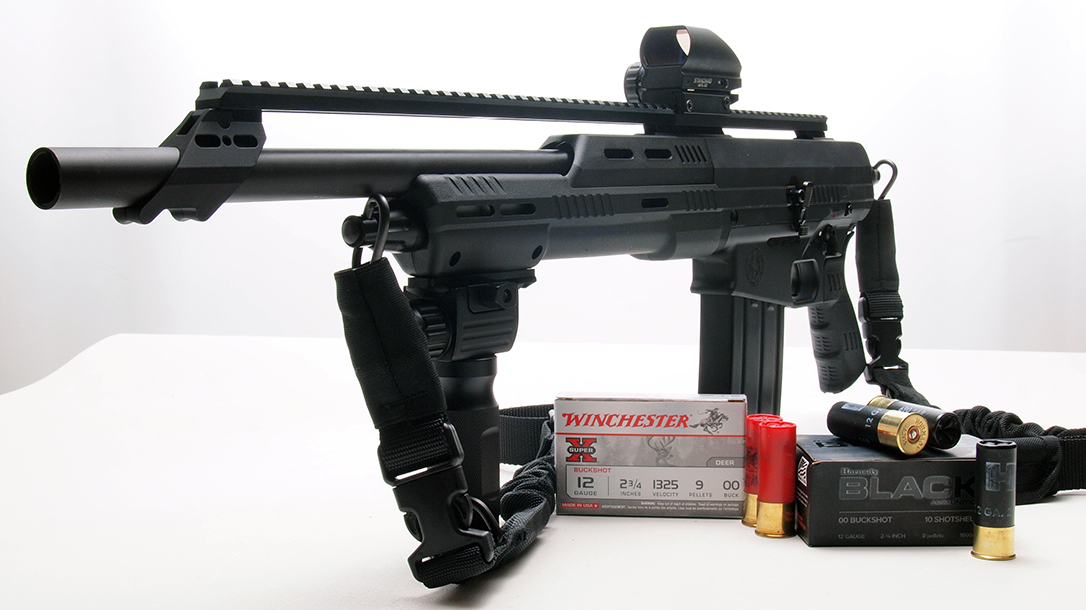 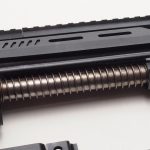 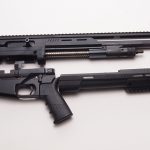 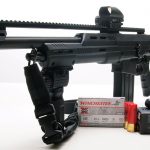 Pistol-grip shotguns are experiencing a renaissance, with more selections available now than ever before. While only a few years ago this class of shotgun was derided by some as a near-useless novelty, there are now many pump actions and autoloaders made with either tubular or detachable box magazines. Novelty guns? No, but clearly niche weapons where their shorter length and lighter weight make them suitable for extreme close-quarters fighting from a vehicle or within the confines of a home—places where a handgun would suffice, but the more decisively empowered shotgun works far better. The 12-gauge SKO Shorty introduced by Standard Manufacturing in 2017 is one such example of this specialized breed now making a comeback. 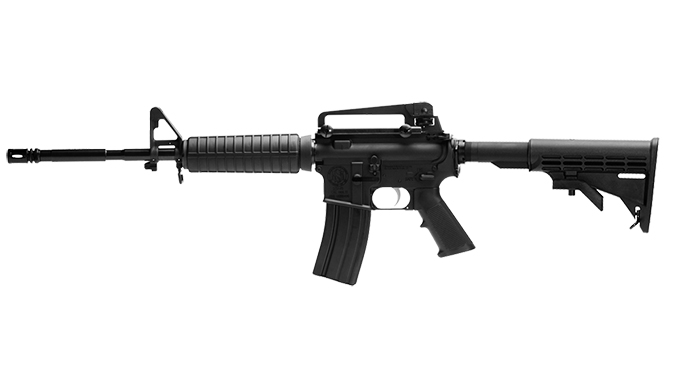 The SKO Shorty is a gas-operated semi-auto that feeds 2¾- or 3-inch shotshells from detachable box magazines. Weighing 7.14 pounds unloaded and measuring 28.75 inches long with an 18.88-inch barrel, the SKO Shorty is essentially a full-sized shotgun sans the buttstock.

The SKO Shorty comes with one 5-round steel magazine, though two- and 10-round magazines are available. The company outsources these mags, but is designing a 25-round drum in-house. Besides being faster to reload, shotguns with detachable magazines offer other advantages over tube-fed designs. For example, changing from buckshot to slugs in order to engage a distant or barrier-bound threat isn’t as easy with a tube-fed shotgun. (The only tube-fed shotguns that allow an easy change like this are the Kel-Tec KSG and the UTAS UTS-15 shotguns, with their twin magazines and mag selector switches.) Detachable mags also appeal to homeowners who prefer to store an unloaded, but rapidly deployable, defensive weapon.

The fit, finish and materials used on the SKO Shorty are very good—mostly superior to other sub-$700 semi-auto shotguns. The lower receiver is milled from an aluminum forging and joined with two push pins to an aluminum upper made from 7075-T6, while the barrel is deep-bore drilled from a solid 4140 chrome-moly steel rod and fitted with a screw-in Trulock open choke. All of the steel parts are nitrided for corrosion and wear resistance, and the only plastic parts on this shotgun are the stock components.

The lower receiver is serialized and contains the fire control parts while the upper contains the bolt group. There is no buffer tube since the recoil spring is mounted forward of the breech.

Aside from the grip, no parts interchange with the AR-15, but the ambidextrous safety, magazine catch and bolt catch/release lever have similar functions and positions. And it’s worth mentioning that the action stays open after the last round is fired from the magazine.

The SKO Shorty comes without sights, so adding a rail is necessary if you plan to do anything more precise than simply pointing and shooting. There are two places where the upper receiver is drilled and tapped, but these areas are designed to fit a proprietary rail made by Standard Manufacturing; aftermarket rails will need modification. Standard sells several accessories for the SKO line, including a sling kit, a red-dot sight and sturdy aluminum forward grip with an integral light/laser that I consider a must-have accessory for home-defense use.

Before my first range session, I lubricated the bearing surfaces on the bolt and then set out to fire the recommended 25 high-brass shells to break the gun in. Two occasional problems arose that the break-in did not correct: The bolt didn’t chamber shells when released by the bolt catch, and there were sporadic failures to eject.

Since Standard Manufacturing is located fairly close to me, I took the SKO Shorty back for an in-person fix by one of the company’s technicians, who quickly diagnosed the problem as a defective extractor spring. He repaired it in less than an hour while I toured the company’s fascinating and unique gun-making plant in New Britain, Connecticut. I’ve toured several gun-making facilities, and none are more interesting than Standard Manufacturing. Artisans fit high-grade walnut to shotgun actions in one room. Meanwhile Single Action Army revolvers and 1911s receive bone-charcoal casehardening in another prior to final assembly. The same precision CNC machines make parts for the company’s SKO and DP-12 tactical shotguns as well as upscale side-by-sides that cost many magnitudes more.

What’s the single common thread that connects the manufacture of such disparate firearms? A commitment to close tolerance parts-making and a high-quality fit and finish. After seeing how they do things at Standard, it didn’t surprise me that a friend immediately remarked how smoothly the SKO Shorty’s action worked without any grittiness or sloppiness.

I patterned the SKO Shorty using three different 00 buckshot loads from Winchester, Hornady and Fiocchi. Additional function testing was done with Federal Field & Target, which is a prolific plinking round loaded with 1.13 ounces of birdshot and a relatively mild 3-dram-equivalent powder charge.

Always pattern your defensive shotgun with the load you intend to use, just as you would sight-in your defensive rifle. I test defensive shotguns at 25 yards by firing 10 shots from each load to evaluate pattern density, counting the pellets that strike within both a 15-inch circle and within an inner 8-inch circle. Hits landing within the inner circle are deemed likely to incapacitate, while those landing outside of the 8-inch ring but within the outer 15-inch ring are considered less effective. Pellets landing outside the 15-inch circle are considered misses and potential liabilities if they strike something unintended. It’s not a perfect method to determine effectiveness, but it’s a decent way to compare the density of 00 buckshot patterns.

The results were very good with the Winchester nine-pellet and Hornady Black eight-pellet loads, while the Fiocchi nine-pellet load yielded wider patterns. On average, using the Winchester load, 73 percent of all pellets landed within a 15-inch circle: 53 percent of the pellets in the inner 8-inch ring and 20 percent in the outer ring. Only two pellets (27 percent) landed outside the 15-inch ring. This is extraordinary performance for a load that uses ordinary wads and much better than I found using the same load in other shotguns.

Using the premium-quality Hornady Black load, with its controlled-expansion wad, gave slightly tighter patterns. On average, 78 percent of all pellets landed within a 15-inch circle. It delivered 60 percent of the pellets in the inner 8-inch ring and 18 percent in the outer ring. Only two pellets on average landed outside the 15-inch ring.

The Fiocchi load gave the most dispersed patterns with only 38 percent landing within the 15-inch ring. It totaled 31 percent in the inner 8-inch and 7 percent in the outer.

After changing the extractor spring, the SKO Shorty was reliable with the five-round magazine. But a 10-round mag only worked well when loaded with no more than seven shells. Any more and the leading shell pressed upward with enough force to slow the velocity of the recoiling bolt, resulting in stoppages. Fully loaded magazines inserted easily into the magazine well with the action closed, but it’s advisable to tug down on them after you feel the mag latch is correctly engaged and check that the mag isn’t tilted, or the bolt could override the first shell. 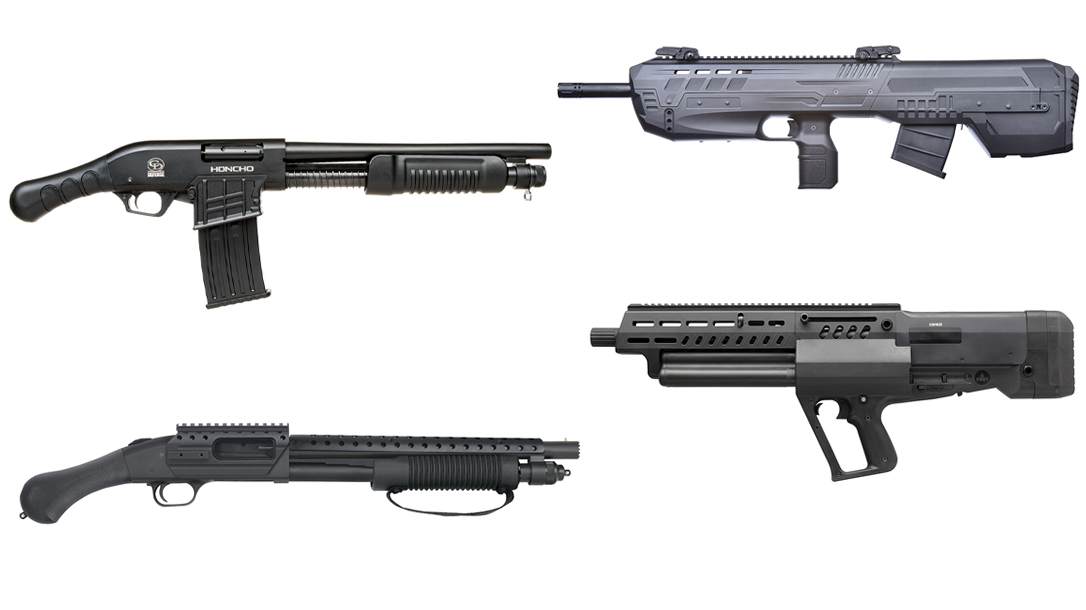 15 of the Best Shotgun Options for 2019 and Beyond

The trigger travel feels just like a mil-spec AR-15’s, but with a 9-pound pull according to my Lyman digital gauge. Though this trigger is heavier than most, it presented no difficulties. The SKO Shorty’s intended use is as a fun plinker or close-range tactical weapon.

The charging handle is large enough for quick capture. Meanwhile, the mag release button and bolt lock are as accessible as an AR-15’s. The only ergonomic problem I experienced is the position of the right-side safety lever, which abrades the trigger finger. Wearing a glove helps somewhat, as would shortening or removing the lever.

The SKO Shorty handles surprisingly well and is a very fun gun to shoot. The perceived recoil is mild and the muzzle rise minimal. It’s mild even with heavy buckshot loads, thanks to its weight, muzzle-forward balance and vertical foregrip. The contrast with similar, lighter pump-action shotguns could not be more obvious. This piece also points naturally—a marked contrast to Shockwave-type shotguns with bird’s-head grips. However, be mindful that hip shooting the SKO Shorty won’t be any more accurate than with any other firearm. So bring the gun up to at least chest height if you intend to consistently hit your target.

This shotgun’s reliability with five-round magazines and very good pointability when fired from chest height or above make it a contender using function- and pattern-tested loads for defensive use where engagement distances are close enough to not require the more precise aiming and control of a longer shoulder-fired weapon. The SKO Shorty is a handy car gun because its size permits easy stowage between the front seats. It’s also much easier to engage threats while seated. Where the added length of a shoulder-stocked weapon disadvantages maneuvering, the detachable mag offers real advantages over a tube-fed gun. Finally, this shotgun’s construction quality stands far above plastic-framed AR wannabe shotguns and AK-type shotguns with flimsy stamped-steel receivers. 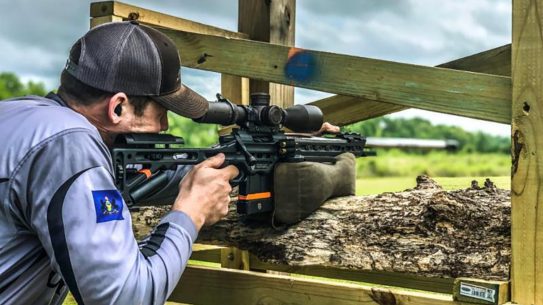 The 2019 Precision Rifle Expo at Arena Training Facility gives shooters the chance to...