by Mike Detty
in Guns, Shotguns
0

Long known as the Copper State, Arizona at one time provided the U.S. with as much as 60 percent of its copper supply. In the mid-1980s, faced with union strikes and complying with tough EPA pollution standards, one of the largest mines shut down. Others fell like dominoes, and Arizona’s once-thriving mining communities became modern-day ghost towns. A few diehards hung on and refused to move, but the majority relocated to find employment. 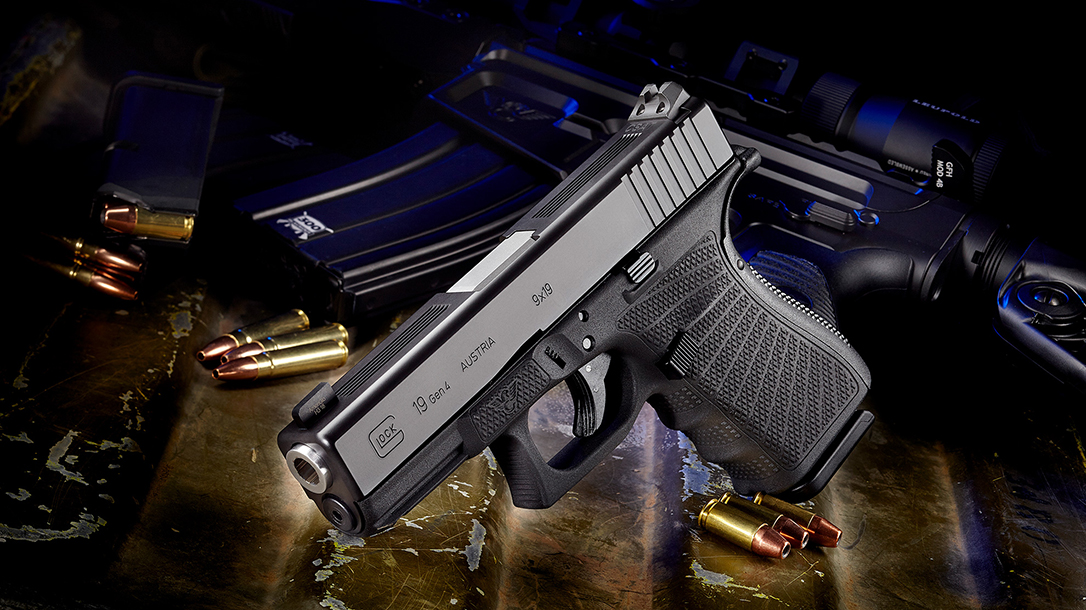 But the geographic location made this area perfect for those who made their livelihood differently. Located close to Mexico and between Tucson and Phoenix, this former mining region was perfect for the distribution of illicit drugs. With few eyes on them and easy access to the I-10, Highway 79 to the east and I-8 to the west, traffickers found this area a dream location.

It was in this unforgiving terrain, choked with cacti and creosote bushes, burnished by wind-driven sand and scorched by the relentless sun, that my niece began her law enforcement career. Fresh out of the academy with her Peace Officer Standards and Training (POST) certification, she first started work as an armed officer with a private company that transported illegal aliens from various Border Patrol checkpoints into Tucson for processing. On her off days, she worked as a volunteer police officer for one of these small mining towns. She eventually received a full-time position. It took some time, as the city council had to approve her new position, and in addition to being a full-time patrol cop, she was also the small town’s animal control and code enforcement officer. Despite the pay cut, worked hard and developed a good reputation among her peers.

I had to admire her perseverance. She tore her ACL the first week at the academy and was still able to keep up with the rigorous physical training for the next 26 weeks. After spending 14-hour days at school, she’d stop and buy some groceries on the way home and then cook dinner for her mother (my sister), who was waging her own battle against breast cancer. The fact that she was able to deal with everything on her plate has earned my undying respect. She doesn’t have an ounce of quit in her!

Gearing Up to Serve

My niece had to supply her own pistol, duty belt and uniform. Fortunately, she had a Glock 22 Gen4 that I had given to her as a present two years earlier for taking care of me after I had an ankle replacement. Her department supplied her with ammo for qualification and for carry, and that’s it. When I asked her about their shotguns, she told me she had seen some Remington 870s in their meager armory, but, “They looked old and in pretty rough shape.”

A few years earlier, I had bought a Remington 870 Wingmaster at a gun show for $200 with the idea of building it into a tactical shotgun. Now I knew what I needed to do. Through its Scattergun Technologies division, Wilson Combat offers what it calls its Remington Steal Package, which presents customers the opportunity to refurbish Remington 870s to like-new condition, with some upgrades that make them perfect for law enforcement or civilian use.

The Remington Steal Package can return your old hunting gun or retired cruiser 870 to near-perfect condition. Customers can choose from a list of modifications to have their shotguns rebuilt to meet their needs and budgets. I chose to have the old Wingmaster converted to Wilson Combat’s Border Patrol model.

According to Wilson, “The Border Patrol has an outstanding, well-earned reputation as the workhorse of Wilson Combat/Scattergun Technologies shotguns. The U.S. Border Patrol uses thousands of these guns daily, in some of the harshest conditions of both weather and terrain. Unequaled quality and relentless reliability are the minimum requirements demanded of a firearm for its mission, and the Border Patrol model has met these expectations for years.” Though my niece is not a Border Patrol officer, I thought this combination of parts and modifications would best suit her needs for work.

All the worn and damaged parts were replaced, and the wooden buttstock and forend were switched out for touch synthetic versions that will never warp or crack. My Wingmaster was fitted with a SpeedFeed stock, though Wilson recently started using Hogue stocks. Wilson also cut the barrel to a shorter 18.4 inches, and re-cut the choke to cylinder bore, which is ideal for slug and buckshot use. My gun had a 2¾-inch chamber, and Wilson re-cut the chamber to 3 inches.

For the sake of reliability, the shotgun was retrofitted with a Flexitab anti-jam system. A stainless steel spring and high-visibility follower were added to the magazine tube. The standard safety at the rear of the trigger housing was replaced with an oversized safety. It can easily be engaged and disengaged even when wearing gloves. The entire trigger assembly was also professionally remanufactured for absolute reliability.

Wilson technicians not only bring the shotgun up to fighting standards, but also refinish it to make it look new. The base gun for this Remington Steal Package was an old 870 Wingmaster with a 28-inch barrel. The typical hunting gun exhibited wear—well used, with bluing missing in spots and some pitting on the receiver. Sanding sticks were used to eliminate the pits, and then the receiver was bead blasted. Wilson Combat drills and taps the rear of the receiver in two places for its Trak-Lock rear sight.

Once the barrel, chamber and choke were cut, the new front sight base was silver-soldered in place. It too was bead blasted prior to being Parkerized. With the barrel and receiver Parkerized, Wilson craftsmen applied a black Armor-Tuff finish. Designed to provide a non-reflective finish, the Armor-Tuff seals the pores of the metal. Further, it offers corrosion resistance while delivering a certain amount of lubricity between the coated parts. This is especially important in a desert environment, where standard lubrication acts like a sand magnet.

Wilson Combat refinished all parts, assembled the gun, test-fired and returned to me. I wasn’t prepared for just how nice the customized gun would be. In fact, I couldn’t tell that it had once been an old hunting shotgun! The old wooden furniture was gone, the barrel was shorter and all the pitting on the receiver had been erased. For all intents and purposes, it was a brand-new gun.

Even though I had received the gun several months earlier, it turned out that my niece and I couldn’t match our schedules to go shooting until her birthday week. But as far as she was concerned, I couldn’t have given her a better gift. With a good assortment of 12-gauge ammo, we found a spot in the Rincon Mountains to shoot her new shotgun. We started with some cheap promotional birdshot loads to get a feel for it. The smooth cycling of the gun impressed immediately. It is slick. With light-recoiling birdshot rounds, we were both able to hammer a steel target about 20 yards away. 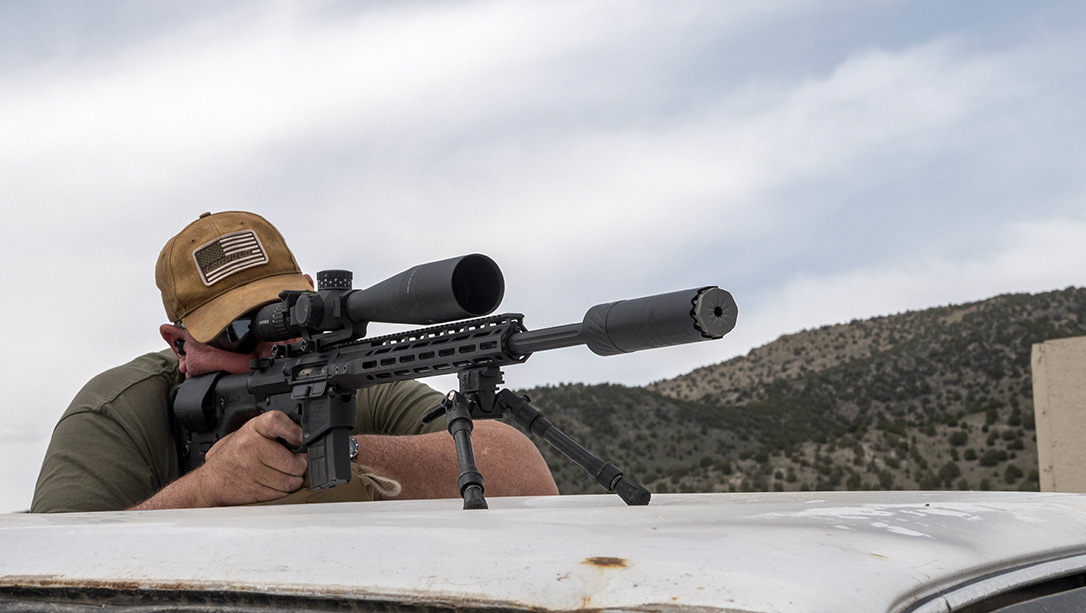 Using Remington’s 1-ounce Slugger Managed-Recoil slugs, we each fired groups that measured around 5 inches off-hand at 35 yards. These rounds are about 45-percent lighter on recoil than traditional slugs and boast an effective range of about 80 yards. The Trak-Lock rear sight delivers adjustability for windage and elevation; however, the gun shot to the point of aim and needed no adjustments. We also fired some Remington Express Managed-Recoil buckshot, which generates about half the felt recoil of standard buckshot. It placed all eight pellets in a pattern about 9 inches in diameter at 20 yards. To be clear, the recoil-reduced shells served my arthritic shoulder, not my niece. This young lady seems to be amazingly recoil-tolerant.

In the time span between shipping my old Wingmaster to Wilson Combat and my niece shooting the rebuilt gun, she has moved to a new agency and is working as a county sheriff’s deputy. This department receives much better funding, including the best possible equipment, firearms and vehicles. While she may never carry this Wilson Combat Border Patrol shotgun on duty, she can rest assured that she owns the very best tactical shotgun available. That makes her Uncle Mike awfully happy!