by D.K. Pridgen
in Guns, Handguns
0 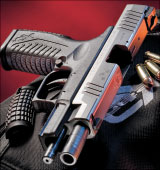 When my department transitioned from revolvers to pistols, I watched as the duty handgun for most of today’s law enforcement officers became a pistol—a durable, simple-to-shoot, safe, high-capacity pistol, and of late probably featuring an equipment rail.

I recently checked out Springfield Armory’s newest rendition of their robust polymer framed XD—the XDM—an upgraded version that will find itself at home as an LE tool. The XDM began life about seven years ago as the HS2000, morphing into the XD when Springfield began importing it.

The new XDM has the characteristics of a fine LE sidearm, starting with ergonomics and shootability. It’s blessed with excellent pointabilty, possibly the trimmest grip of any polymer high-capacity pistol regardless of caliber, and a paucity of external controls that allows getting the trigger going instantly.

The XDM grip contours have been reshaped for a slimmer feel, while making the minutely extended magazine release easier to reach. In the cold, officers do not have to remove their gloves to operate the XDM. The trigger guard is amply sized for gloved fingers and the new deeper and sharper fore-and-aft slide cocking serrations grip gloves as well as they do skin.

Springfield added several new features that make the XDM even more comfortable, such as interchangeable backstrap inserts, for custom fitting to the hands of various sized operators. The polymer frame of the XDM/XD flexes minutely, and the grip places the pistol as low as possible in the hand, for controllable, comfortable shooting.

More Accuracy Innovations
To ensure the pistol stays put in the hand regardless of recoil or the introduction of sweat or other liquids, the XDM has new Mega-Lock Texture (think aggressive tire treads). According to Springfield, “The angle and depth of each contour in the grip has been calculated for maximized control vertically, horizontally and torsionally.”

As for durability and accuracy, I’ve handled, tested, and watched others pour thousands of rounds down range through XDs. None, in any caliber, ever failed to produce excellent accuracy or stand up to hard use. (Noted trainers Clint Smith and John Farnam have adopted original XDs. Enough said.) The tough Melonite finish stands up amazingly well to abuse and wear. To further enhance accuracy, the XDM sports a new Novak-like rear sight.

Noted trainer Tom Givens of Memphis’ Rangemaster,  shared the following:
“One rental HS2000 in 9mm went through 35,000 rounds. We replaced the magazine catch spring once and the recoil spring assembly once. We later sold it as a used gun, and as far as I know, it’s still in service. At least two of my staff have XD’s in .45 that they have shot very extensively.” All springs have limited lives, of course.

Like the XD, the XDM has a grip safety and the USA (Ultra Safety Assurance) trigger system. The tactile and visual loaded-chamber indicator and a cocked indicator are sure to please officers on either daylight or graveyard shifts. The loaded-chamber indicator, easily visible or felt, protrudes above the slide when a round is chambered. Likewise, the pin protruding out the slide’s rear reveals by feel or sight whether the pistol is cocked.

Finally, the XDM retains the easy maintenance of the XD, but goes one step further: Field stripping the XDM yields robust, difficult-to-lose parts and assemblies, which require minimal lubrication. Sure to please firearm trainers and armorers, Springfield redesigned the XDM to not require pulling the trigger during disassembly.

Shooting the XDM
The first XDM is in .40 S&W, the most popular LE caliber, but Springfield plans others. While the .40 is not known as a target round, during my informal testing the first group (Winchester 180-grain SXT) from the match barrel standard on XD/XDM was an impressive 0.99-inch. Other loads produced groups between 1.5 and 1.75 inches, but would have benefited from shooting off the bench.

Freestyle shooting proved Springfield’s claims about the Mega-Lock Texture and the new grip contours’ feel. The all black and the bi-tone pistols shot like a house on fire! The only glitch was one prototype magazine with a weak spring failed to lock-open either pistol. Not unexpected with prototype magazines.