A few years ago, when Sig Sauer first began their advertising campaign for the SIG556 that was still yet to be released, I attended a demonstration at the Sig Sauer Academy in September 2006. Part of the scheduled events that weekend included a chance to fire the “556.” What we actually handled, however, was a prototype in development, based upon the military 550. 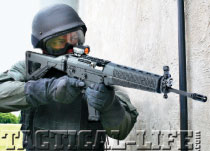 What I remember most about the weapon was a unique appearance with a gray finish and its side-folding stock. I also remember its excellent handling characteristics, even in full-auto (the weapon we handled was select-fire). At that time, we were told that the 556 would actually be equipped with a telescoping stock like that of the Colt M4 and its clones. One writer praised the decision for the stock, saying it was “the only way to go,” due to the variable length-of-pull (LOP) enabled by the telescoping stock. I lamented, as I favored the serious length-reducing attribute of the side-folder.

What finally emerged by the time the gun went to market was a very contemporary ver-sion with a black finish and Picatinny rails atop the receiver and handguards. At first glance, the SIG556 might even be mistaken for another black rifle: the AR15.

I had an opportunity to test the SWAT version of the SIG556 last year. While it was a positive experience, I must admit that I missed the old appearance of the 550 and its side-folding Then in January 2009, the SIG556 Classic appeared. The Classic sported a look much like the 550 variant I’d previously handled including the folding stock. Better still, the Classic’s folder incorporates a telescoping function so that the rifle may not only be shortened for stowage, but also adjusted for LOP.

Gun Details
The SIG556 family of rifles use a gas-piston operating system, a superior system to the gas impingement arrangement in my book. The piston means that weapon doesn’t dump all of its waste (burnt gasses and carbon residue) into the mechanism like an AR15, making for much quicker, easier cleaning, and more reliable function. In the case of the SIG556, this gas piston is adjustable for two settings.

The upper receiver is equipped with a Picatinny rail and our Classic had been shipped with Sig Sauer’s mini red dot reflex-type scope for quick acquisition, complementing and co-witnessing with the windage adjustable and hooded front sight blade. The rear iron sight is a proprietary flip-up rear peep, tucked away into a recess in the rail at its rear. Optics may be mounted directly over the folded sight.

It is obviously intended specifically as a back-up, as it is flimsily constructed and unprotected when deployed. We also received the optional Sig Sauer Rotary Diopter rear sight, adjustable for both windage and elevation with incremental corrections for 100, 200 and 300 yards. The Rotary Diopter may be mounted on any Picatinny rail.

CNC machined from an aircraft-grade aluminum forging which is then hardcoat anodized, the lower receiver employs controls located similarly to those of the AR15, with an ambidextrous thumb safety just above and forward of the pistol grip; it swipes down to fire. The magazine release is located just behind the magazine well and is surrounded by a raised rim. Sig Sauer moved the release back 0.25 of an inch further than their original models, since the reach was rather long. Currently there is a plan to re-tool the receiver to accept an ambidextrous magazine release in future guns. A bolt release, which operates by being pushed upward, is located on the left side of the receiver behind the magazine well. Upper and lower receivers are coupled rock-solid by a flat-head joint pin at the front and a captured crosspin at the rear.

The gas tube has spaced ports to vent excess gas. The Classic employs a rotating bolt, which is CNC machined from bar stock; its carrier is CNC machined from an extrusion. A charging handle rides in a groove on a left side of the receiver and a slotted rubber boot, through which the handle operates, that  prevents dirt from entering.

The 17-inch barrel is a cold hammer forged unit with a 1-in-7-inch rate of twist and six grooves. The Sig Sauer’s barrel is made entirely in-house. One large feed ramp is utilized, rather than the two normally found in many modern battle rifles.

A flash suppressor using a standard thread pattern allows for compatibility with aftermarket accessories. Sig Sauer is in the process of changing the barrel length to 16.9 inches to accommodate a bayonet for military and export guns.

During normal firing, the gas valve is left in the vertical position; if the weapon were ever to begin malfunctioning due to fouling, the fin at the front of the valve could be turned clockwise, venting more gas to the piston until normal functioning resumes in the SIG556.

The triggerguard is hinged like that of an AR15, for use with a gloved hand. A two-stage trigger employs a pressure point screw behind the actual shoe to regulate tension of the two-stage pull. The profile of the trigger itself is also different, having a flat face with a slight forward curve at the bottom.

Resembling the profile of an FAL grip, the pistol grip incorporates a hinged bottom plate, creating a storage compartment. The gun accepts standard AR15 magazines, allowing Sig Sauer shooters instant access to a huge supply of magazines. Nonetheless, the Sig Sauer ships with one 5-shot polymer Sig Sauer magazine, which has small rails on its exterior allowing the fastening of other Sig Sauer magazines. To better facilitate reloads, the magazine well of the Sig Sauer is a bit larger and more flared.

The collapsible high-impact (nylon 66) composite material buttstock features a rubber butt pad, multiple sling attachment points, and a waterproof battery compartment. It is adjustable for three positions and a thicker butt pad is available if more length of pull is desired.

The smooth, tapered handguards incorporate the same high-impact composite material found in the buttstock; a rail adaptor system with a rail on each side and the bottom has been available since March 2009. This will allow the mounting of lights and lasers while still maintaining the smooth surface of the handguards. The attachment will retail for about $18. Quad rail handguards are available as an option. As well, a SWAT version with the quad-rail handguards is offered, and comes equipped with the rotary diopter rear sight rather than the red dot scope.

Red Dot Sight
In preparation for our tests, we mounted Sig Sauer’s STS-081 Mini Red Dot Sight. At just 2.5 inches overall length and a mere 3 ounces, the STS-081 is very compact and light. The parallax-free, 4-MOA (minute of angle) red dot is visible through 1x coated glass lenses, and has 11 settings for proper visibility through a range of lighting situations. Unscrewing the caps on the turrets mounted both atop and aside the housing, then dialing in the appropriate dope easily accomplish zeroing. Powered by one 3V CR2032 lithium battery, runtime is about 8,000 hours.

The housing is a high strength extruded aluminum body with anodize coating, lending rugged durability for hard use, and the scope mounts on Mil-Std-1913/Weaver accessory rails. Simply loosening and then tightening down the nut on the left side of the sight base allows instant mounting on the Classic’s Picatinny rail.

Range Time
At the range, temperatures were 40 to 50 degrees Fahrenheit, and we fought 10 mph gusts head-on. After firing several volleys to dial in the iron sights, moving the red dot to the tip of the front blade was quickly achieved and verified with a few more rounds downrange. After that, it was down to business, firing three-round groups at 100 yards, the 556 resting atop a sandbag.

The Classic hammered away all day long without a hiccup. More than that, it ran silky smooth with a very solid feel to it. Thumbing the bolt release on a loaded magazine sent a round slapping into the chamber like a bank vault slamming shut. Recoil was light, and the trigger was somewhat spongy, though smooth, ending with a crisp, rolling break at 7.75 pounds. Perceived as lighter, the pull was very consistent from shot to shot, and easy to work with.

Double taps from 25 yards were easily controlled and rewarded us with pairs only a few inches apart. Muzzle rise was very minimal. The learning curve for the SIG556’s different bolt release and charging handle was short. The charging handle can be ripped without lowering the gun, well out of the way of optics. The magazine release was easily manipulated, an improvement over the early models, in which we had to shift our hand position on the pistol grip to reach. The handguards were certainly smooth and easy on the hands.

Our only complaint was the red dot on the STS-081. While great for an entry situation or up close, the dot was too underpowered to easily pick up at 100 yards in the bright sunlight.

Final Notes
The SIG556 platform makes for an excellent rifle and the Custom was no exception. Great ergonomics, unyielding reliability, a great trigger, solid feel, light recoil and good accuracy make it a solid performer. The improvements, to include a stock that both folds and retracts in length, the smooth fore-end and the shifting of the magazine release closer to the hand all worked in the gun’s favor.

The more variants of the SIG556 we see from Sig Sauer, the better they get. When I asked Eric Von Bosse, product manager in marketing, if a .308 version was in the cards, he told me that work was already in progress to tweak the design for the bigger round, and expected to be ready within a year.