I’ll be the first person to admit that when I heard that Sig had won the Modular Handgun System contract I was disappointed. I loved the various Beretta M9 pistols I’ve been issued during my time as an Air Force Combat Arms instructor. So, I was dead-set to hate the new Sig M18. However, now that I’ve put over 1,000 rounds through the platform, I wanted to write a Sig M18 review that examines how my position on the gun has changed. 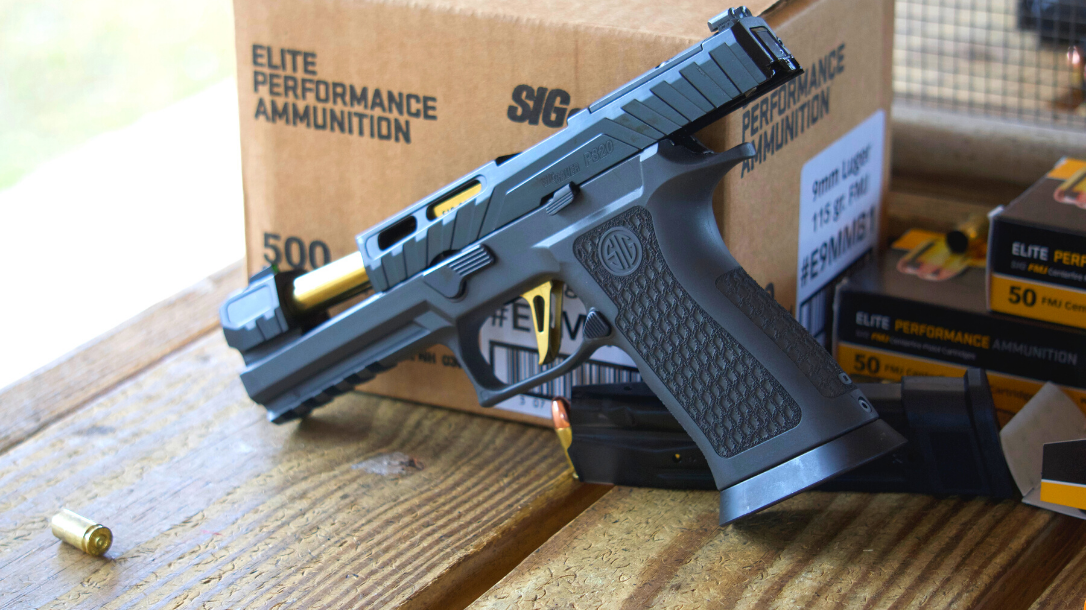 This Won’t be a Traditional Sig M18 Review

As I said in the first paragraph, I love the Beretta M9. When well maintained it’s likely the best service pistol ever issued to the general US military. I also fully realize that if I’d been in the military when we transitioned from the 1911 to the M9, I’d probably hate on the M9 and be a die-hard 1911 guy. So, it’s important during this Sig M18 review to attempt to recognize my own biases.

With that in mind, this isn’t going to be a review where I shoot tiny groups with the gun off the bench  with a single, hand selected gun. In fact, I’d argue that it’s a much more representative review of the gun. See, I don’t have 1,000 rounds on a single M18, but rather 1000 rounds spread out over multiple different guns that I’ve shot for qualification and training. Also, even though the Army selected the full size Sig Sauer M17 variant, we’re not going to cover that. The Marine Corps, Air Force, and Navy all opted for the more compact M18 as their service sidearm.

Both of the Sig MHS pistols are polymer framed, striker fired 9mm pistols. They use the Sig P320 handgun chassis system. That means that the fire control unit is the serialized part. The grip modules can be interchanged to better fit the user. However, in practice so far, the only grip modules on the service versions of the Sig Sauer M18 are the ones shipped from the factory.

The M18’s slide is stainless steel with a coyote PVD finish. The gun itself features Siglite night sights, and the night sight rear plate is removable by an armorer if the military ever decides to allow general issue pistol optics. One of the features on the new Sig that I genuinely like is the useful and easy to manipulate thumb safety, which blocks the trigger from being pulled. And, on a purely aesthetic note, the coyote tan finish on the M18 and the full size M17 looks pretty good.

So, as mentioned above, because this isn’t a traditional “gun review” it’s going to be a little different. The procedure is less about group sizes and rather how the gun actually performs operationally as a service pistol. With that in mind, the first thing we’re going to talk about is the trigger. As part of bringing the new handgun online, we gauge the triggers on the new guns. I have encountered trigger pulls that range from 4.5 pounds (good!) all the way up to 7 pounds (bad). With that being said, the vast majority of M18s I’ve messed with while gathering the data for this Sig M18 review all had triggers in the 5ish pound range. That’s well within what you’d want for a service pistol.

Alright, let’s get into the stuff that really matters. How does the gun shoot? When I first started shooting the M18, I wasn’t a big fan. I found the recoil snappy, especially when compared to the metal framed Beretta M9. I also wasn’t a huge fan of the sights, which use what Sig calls a “combat hold.” Another term for this is called “Drive the Dots,” coined by the late Todd Green. This hold means that instead of the bullet landing behind the tip of the front sight, it lands behind the night sight dot on the front sight. There are arguments for and against this hold. I personally find it quite useful for action pistol shooting, but not as good for precision shooting. More on that later.

During the Sig M18 review, I did come across some features I did like quite a lot. Because it’s a short barrel on a full size grip, the gun moves fast in transitions. As mentioned above, the thumb safety is easy to use. Additionally, the magazine release is easy to locate, and lastly the sights do provide a good sight picture, once you get used to the hold.

However, I still wasn’t a fan of the trigger, and I’m not a fan of how small the grip is. I get that many shooters struggled with the size of the grip and the trigger reach on the M9, but I was not one of those shooters. The size of the grip on the Sig pistol and its lack of aggressive texturing make it more difficult for me to control in rapid fire than the M9.

The Trigger: It Gets Better

What I wish I’d known when I first decided I hated the M18 was that the trigger gets better. Much like the Beretta APX that I’m a huge fan of, the M18’s trigger “shoots in” after a few hundred rounds. Some of the creep works itself out, the wall gets a little lighter, and the gun genuinely shoots a lot nicer. Plus, all the stuff I already liked is still there on the gun. Also, if I’m being honest, I like that it holds more rounds than the Beretta. With the M18, I can carry 21 rounds in my spare magazine and 17+1 on board the gun. The 21 round magazines do stick out a bit from the butt of the gun, but personally I like that look.

It’s also surprisingly accurate. Despite the abbreviate barrel and unusual sight picture, the M18 is perfectly capable of holding groups in the black on a B8 target at 25 yards from a standing unsupported position. For a service pistol that’s downright solid. I imagine that if the gun used a more traditional sight picture, I’d be able to hold tighter groups. The combat sight hold that Sig uses is great for hitting big targets 15 yards and in, but for precision work it does suffer. However, for a service pistol issued to airmen, the combat hold is easier to teach than a traditional sight picture. That’s honestly a benefit.

It took over 1,000 rounds in training, but I don’t hate the M18 anymore. Will it ever replace the M9 in my heart? No, because you never forget your first love. However, given what a service pistol needs to do, the M18 is more than adequate. In many ways, the Sig M18 has the potential to be a better service pistol than the M9 was. The single trigger pull will be easier to train shooters on, the sights are admittedly easier to use, and it will fit a wider variety of hands than the old gun.

Hopefully, the branches will do a better job maintaining their M18s and M17s than we did with the M9. That way, the Sig will offer many years of good service in the holsters of soldiers, sailors, marines, and airmen.