Few things stand out more in my shooting life than the first time I ran an HK MP5.  I was a patrol cop working for an urban department. I spent a lot of time training with my pistol and shotgun but had no designs on making the SWAT team. As a father and husband, the callouts and additional training were incompatible with my responsibilities at home.

Still, I had an opportunity to shoot with some of the SWAT officers and become familiar with the weapons they carried. The idea was that I might need to employ, or simply make safe, one of their guns on the scene of an incident. The SWAT sergeant who handed me his MP5 explained the basics of the gun and instructed me to “let ’er rip.” That was a fun day on the range.

Since that time, I’ve had a fascination with pistol-caliber carbines. Sure, there are drawbacks to a 9mm rifle when compared to a typical rifle cartridge like the 5.56mm NATO. However, a 9mm carbine can offer several improvements over both a handgun and a traditional rifle.

When compared to a handgun, a 9mm modern sporting rifle (MSR) offers three advantages: greater magazine capacity, increased bullet velocity and improved accuracy at longer ranges. Yet, when compared to something like an AR-15, a 9mm carbine can offer less report, recoil and muzzle flash. From a practice perspective, ammunition costs can also come into play. Consider this another advantage for the 9mm. While there is no way for me to know what your ideal home-defense gun is, I can say that a 9mm carbine is a good choice to consider.

I like the AR platform, and there are several great 9mm carbines using this system. When Sig Sauer introduced its MPX series of firearms, I was immediately interested. The gun looked a lot like an AR with controls laid out in all the same places. But it was clear that Sig did not merely copy Eugene Stoner’s design. The company instead seemed to use the AR as its inspiration to design a completely new gun.

The Sig MPX series includes carbine, pistol and short-barreled rifle (SBR) variants. For government purchasers, select-fire versions of the guns are also available. This makes the SBR a great submachine gun option for SWAT and military teams that need a high volume of fire. All of the guns in the MPX line are in high demand and can be tough to find at gun shops. I was fortunate enough to get a carbine model from Sig Sauer for this article.

The Sig MPX’s controls are completely ambidextrous. This includes the safety selector, charging handle, bolt catch and magazine catch. The magazine and bolt catches are both textured so they’re easier to activate in poor conditions. Sig includes a sling, quick-detach (QD) hardware and a pair of rail adapters for the KeyMod handguard.

My test gun came with a pinned and welded muzzle device that took the overall barrel length to 16 inches. This avoids any complications from the National Firearms Act while still keeping the gun as compact as possible. I would also like to see a version with a threaded 16-inch barrel. This would allow shooters to add a suppressor without the need for a second tax stamp for the SBR. 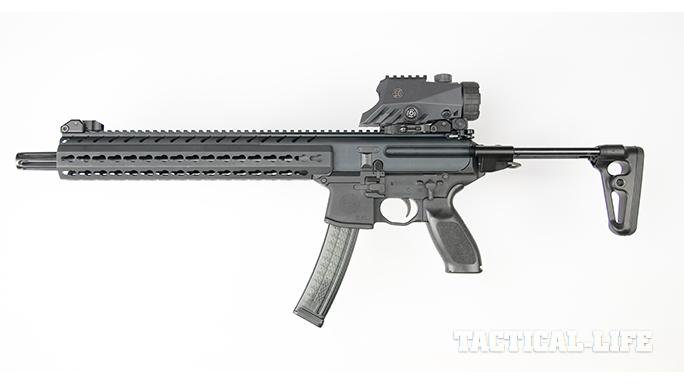 Over the years, I’ve become more interested in the engineering of guns. I suppose this fascination has come from my interest in building AR-style rifles. The more I learned, the more curious I became. Since the Sig MPX has elements that remind me of the AR platform, I was curious about the internal workings of the carbine.

Taking down the MPX was familiar to me, as its disassembly process is similar to an AR’s. Glancing at the gun, nearly any shooter will spot the takedown and pivot pins. If you are doing a quick cleaning, push out the takedown pin and remove the carriage assembly to clean it and the bore.

If you are like me, you like to do a more detailed cleaning after a range trip. Sig makes this even easier than I could have imagined. Just like an AR, push out the pivot pin and the upper assembly will detach from the lower. Once this is accomplished, the handguard can slip off of the front of the gun with no further pins to push or screws to turn. This allows access to the outside of the barrel and inside of the handguard for a wipe down.

As you might expect, this also make it easy to swap out the handguard. The Sig MPX ships with a robust KeyMod handguard made of high-strength aluminum. It allows for the attachment of a variety of accessories while eliminating the excess weight of a quad-rail system. If you want to lighten the load even more, Lancer Systems makes a carbon-fiber MPX handguard that uses the Magpul M-LOK system for attaching accessories. The Lancer handguards are about half the weight of the stock rail and can be had in three different lengths.

Behind the trigger group is a pin under spring tension. This pin applies pressure to the upper assembly to remove slop between the upper and lower receivers. While this is considered an upgrade on an AR, it is a standard feature on the Sig MPX.

Most 9mm carbines being made today use some sort of blowback design. While blowback operating systems are both reliable and easy to design, they tend to have a bit more recoil than gas-operated systems. And while the 9mm cartridge isn’t considered a heavy-hitting round, it has surprised some people with its recoil in a blowback rifle.

For the MPX, Sig Sauer uses a short-stroke tappet gas system with a rotary bolt. This is more advanced than a blowback system and allows for two things. First of all, the MPX’s recoil is much softer than that of a blowback 9mm AR. I’ve shot a lot of 9mm carbines in the past few years, and this is the lightest-recoiling one I have shot. The other thing the operating system allows for is a wide variety in stock design. No buffer tube is needed, so a PDW-style stock can be used without any special buffers or bolt carrier groups. Also, folding stocks can be used. Should you ever want to swap the Sig stock for an aftermarket rig, all you do is turn a couple of screws to pull the old one off. Underneath you’ll find a short length of Picatinny rail onto which the new stock mounts. It couldn’t be any easier.

Although shorter, the bolt carrier looks like one found in an AR. A firing-pin retaining pin is located toward the rear of the carrier. Pulling it out will release the firing pin and firing pin spring.

To remove the bolt, first remove the left recoil spring and rod from the upper part of the carriage assembly. Then you will be able to remove the AR-like cam pin and bolt for cleaning and maintenance. The Sig MPX can be reassembled in the reverse order.

Should you want to remove the barrel, this is also an easy procedure. With the handguard removed from the upper, unscrew two Torx screws that attach the barrel to the upper. With the screws and their corresponding nuts removed, the barrel will slide straight out. You can then disassemble the gas system by twisting the valve and pulling it free of the gas block. The tappet should also come out, allowing you to thoroughly clean the system. Reattaching the barrel is a simple process: Align the barrel with the index pin in the 6 o’clock position, then tighten the Torx screws to 40 pound-inches.

Without a doubt, the best thing about the Sig MPX is shooting it. The Sig MPX is a very light-recoiling gun thanks to the combination of the 9mm pistol cartridge with the short-stroke gas piston operating system. Compared to blowback- operated 9mm carbines, the MPX feels like it has less than half of the recoil. This results in faster shots on target and an enjoyable day of shooting.

During my first range trip, I discovered that the single 30-round magazine was not enough to wring maximum enjoyment from the gun. So, after I got back to my humble abode, I jumped on the computer and ordered up a few more 30-round mags from GunMagWarehouse.com. They had the 30-round ammo feeders at less than half the suggested retail price. Since GunMagWarehouse.com and I call the wonderful state of Florida our home, I got the magazines before the end of the week and hit the range again.

Running more than a case of FMJ ammunition quickly put a smile on my face, and it was the best money I’ve spent in a long time. Through 1,000 rounds of ball ammo, the Sig MPX was 100-percent reliable. I also put about 200 rounds of hollow-point defensive loads through the gun with perfect reliability. This included all of Sig’s V-Crown 9mm JHP loads. Frankly, nothing I did caused the gun to choke.

The included folding sights worked well and were spot on at 25 yards when they arrived. For a combat rifle, the sights are familiar: a post up front and a dual aperture on the rear sight. The sights do not lock into the deployed position. If you are working around a barricade, a bump will knock them out of position. I do not like this. However, since I add an optic to all of my defensive rifles, the iron sights are serving in a backup role only.

For the MPX testing, Sig Sauer sent along one of its BRAVO4 optics. The BRAVO4 is a 4x30mm sight with an illuminated reticle. Sig designed this prism sight to be a true professional optic suitable for combat use. It has features like low-dispersion glass and motion-activated illumination, and it is waterproof for at least 30 minutes to 13 feet. Although the horseshoe-dot reticles are set up for the 5.56mm NATO, 7.62mm NATO and 300 BLK cartridges, I had no problem working it with the 9mm cartridge at ranges from 15 to 50 yards. With the 4X magnification, it was easy to get rounds quickly and accurately on the 50-yard targets.

The Sig MPX is well suited a variety of recreational and professional uses. For an entry team, the SBR version is compact and able to put a lot of rounds on target. As a carbine, I found the design and operation fit the role of a home-defense gun. I’d be lying if I said the MPX wasn’t an amazingly fun gun to have on the range. Even if you don’t need an MPX, you’ll thoroughly enjoy shooting it.