I recently had the opportunity to test two new semi-auto centerfire pistols that I was curious about. The first was the FN American High Power, which I liked quite a lot. The second gun is the Sig P320 Spectre Comp. It’s about as different from the High Power as you can get, and yet I liked it just as much. 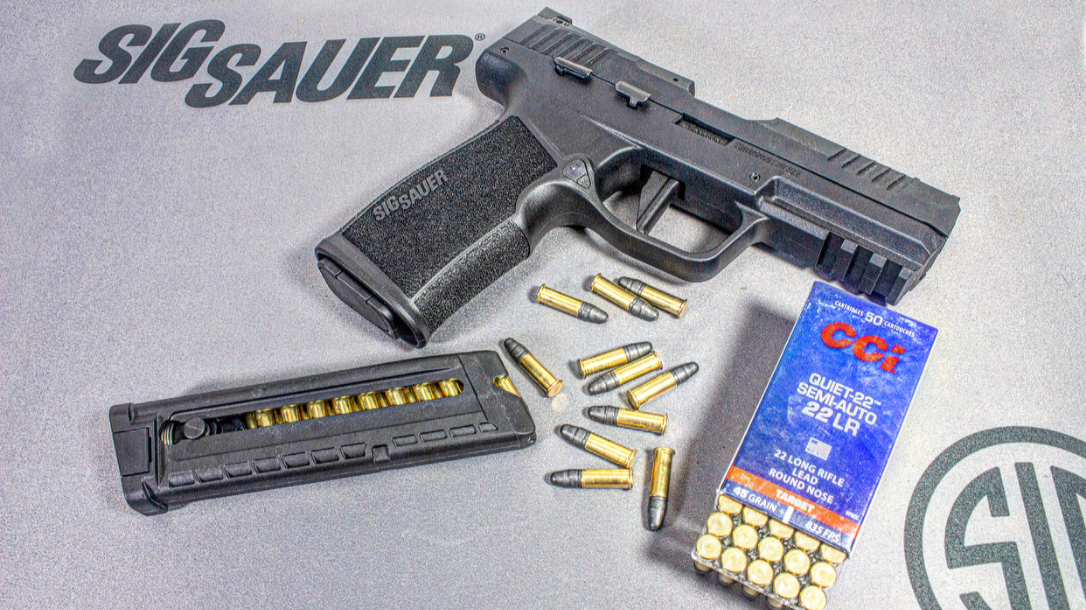 Again, like the High Power I didn’t have 500 rounds to do a proper review of the new Spectre Comp. Instead, I shot a bunch of free ammo that Sig provided at the Shooting Sports Showcase. The Shooting Sports Showcase, sponsored by the Professional Outdoors Media Association (POMA), gives media and manufacturers a chance to interact with each other in an environment that’s conducive to getting work done and free from outside distractions. It’s a great event, and I look forward to attending again in the future.

Now back to the gun. Sig Sauer was in attendance, and brought their new P320 Spectre Comp along with a bunch of other handguns. With functionally unlimited ammo but limited time, I managed to get about 100 rounds through the new gun, which was enough to create an impression.

Old Technology With a Modern Twist

It’s no secret that compensators on pistols are all the rage right now. However, to add a comp to a pistol until now was either an aftermarket option, or a semi-custom gun like the $4,000 Staccato XC. The Sig P320 Spectre Comp takes the lessons learned from the last five years of people building their own compensated handguns and integrates the compensator into the design.

While this gun will most likely be used with a slide-mounted red dot sight, one of the clever touches is that the front sight is attached to the comp. That means that the front sight doesn’t move with the slide, making it easier to pick up for follow-up shots. Old school shooters who are familiar with “sight tracker” competition guns will immediately recognize this benefit. As Phil Strader from Sig said, “it’s old technology with a modern twist.”

Breaking down the specs on the new Spectre Comp, you can tell that Sig designed it to compete against the much more expensive Staccato XC. For example, the Spectre Comp uses TXG X-Series grip module. This tungsten-infused grip model adds extra weight, helping reduce recoil. The trigger is also from the X-Series lineup, and is flat faced with a TiN gold coating. It’s an excellent trigger as well. The take-up is short, the let off is crisp and positive, and there’s almost no over-travel. Lastly, completing the package you have two 21-round magazines.

As I mentioned above, I only had about 100 rounds to burn through the P320 Spectre Comp. But those were fun rounds. For example, Sig had a pair of steel poppers down range and didn’t seem to care that I was doing full on mag dumps into them. Mag dumps that were facilitated by the fact that the gun tracks nearly flat in recoil. According to Sig, the comp’s design also means you can shoot the gun from the retention position safely. Additionally, the flared magwell on the X-Series grip makes speed reloads quite easy.

But What is it For?

That is sort of the million dollar question. The P320 Spectre Comp doesn’t neatly fit into any organized shooting sport division. Because it has a compensator, it’s only legal for USPSA/Steel Challenge Open divisions, where its slide mounted red dot puts it at a disadvantage. Most USPSA Open guns also have 30+ round magazines and frame mounted red dots that don’t move with the slide.

The obvious answer is that it’s “to sell,” which makes sense. But sell against what? Well first off there are lots of people that see cool compensated pistols on Instagram but don’t want to build one of their own. This is an out of the box solution, and most importantly it is one that works.

See, that’s the genius, at least to me, of the P320 Spectre Comp. Because when you really look at it, it’s clearly designed to go after the same market that the Staccato XC targets. The difference is that the Spectre Comp is going to retail for $1300-$1500. Additionally, it’s going to work out of the box with factory Sig P320 magazines, which are commonly available and don’t require tuning. What Sig did with the Spectre Comp is design a factory gun that runs heads-up against $4,000 double-stack 2011s. I don’t know about you, but I think that’s cool.