by Richard Mann
in Guns, Handguns
0

45
SHARES
853
VIEWS
Share on FacebookShare on Twitter
The new Sig 1911 Ultra offers a lot of firepower in a lightweight, compact package that is very easy to carry concealed

When it comes to a duty handgun for law enforcement, many cops swear by the tried-and-true 1911. However, what about the 1911 user looking for a tough and reliable .45 ACP handgun to serve as a backup?

When it comes to the 1911, there are basically three different sizes of 1911 handguns to choose from. The original size, known as a Government Model, had a 5-inch barrel and a full-sized grip. The Commander, introduced in 1951, had basically the same frame size but a barrel that was 0.75 inches shorter. The smallest 1911, often called an Officer’s Model, was introduced by Colt in 1985, though other semi-custom shops had been offering a similarly sized pistol for several years. 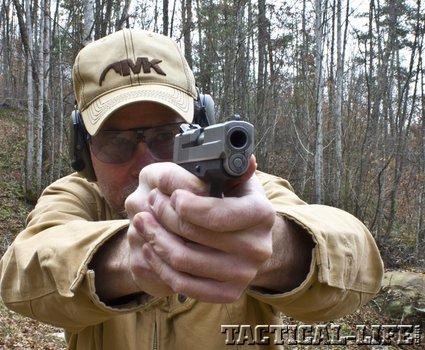 Officer’s Model-sized 1911s generally have barrels between 3 and 3.5 inches, and the grip is about a half-inch shorter than a full-sized 1911’s. Obviously, this makes the pistol easier to carry and conceal than either a full-sized 1911 or a Commander. However, muzzle blast and recoil are intensified, and the reduction in velocity—due to the shorter barrel—can be problematic for bullet expansion, so it’s critical to select and use the proper ammunition selection in these types of guns. 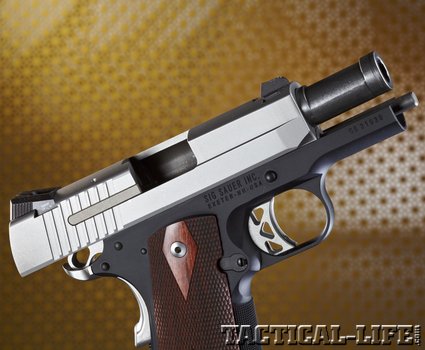 Unlike 1911s from many other manufacturers, Sig Sauer’s design utilizes and external extractor. And it works very well.