Widely regarded as one of the finest battle rifles in the world, the Sig Sauer 551—shown here with two coupled magazines, folding stock fixed, and Trijicon RCO ACOG mounted—is a sterling example of Swiss craftsmanship.

While the Swiss are renowned for high-quality watches, that same precision and craftsmanship goes into their high quality rifles and pistols. Switzerland’s army is primarily a citizen force that relies on reservists to go into battle on short notice if needed. As a result, Swiss reserve troops historically take home their rifles and enough ammunition to fight to their rallying point. In the mountainous terrain of Switzerland, thousands of well-trained riflemen can make advance difficult for even the largest and best-trained army. Therefore, to keep those Swiss riflemen well-trained, shooting competitions and practices are common—to the extent that major highways are sometimes closed on Sundays to allow long-range shooting across them.

To shoot precisely it is necessary to have a precision rifle, and the Swiss do in the Stgw 90, their current service rifle. Chambered for the Swiss version of the 5.56x45mm NATO round, the Stgw is considered by many, myself included, to be the best battle rifle in the world. The Stgw 90 was adopted in 1990, as its name implies. But I was fortunate enough to shoot the Sig 541, upon which the Stgw 90 was based, a few years earlier when the Swiss Grenadier Paratroops were evaluating it. I’ve been a fan ever since.

Stgw 90 Details
The Stgw 90 uses a long-stroke gas piston of the type currently in vogue, along with a rotary bolt. In many ways, the system is similar to that of the AK-47. But unlike a conscript infantry, for whom the AK-47 was developed, Swiss reservists are well trained and steadfastly maintain their rifles. Nevertheless, the Stgw 90 will keep running even when dirty. Another feature that makes the Stgw 90 such an excellent weapon is its superior ergonomics. Its ambidextrous selector/safety switch is well located and large enough for ease of operation, even in gloves. When locked open, the folding stock is as comfortable and solid as the fixed stock on most rifles, and the pistol grip is extremely comfortable. A bolt hold-open is easily released after a magazine change by operating the bolt catch lever or using the bolt handle. I also find the lever magazine release easy to operate with either hand. Another plus is the well-shaped and comfortable polymer handguard. Accuracy is enhanced by the 20.8-inch cold hammer-forged barrel, which in original Swiss military format had a 1-in-10-inch twist, although later 1-in-7-inch barrels were produced to stabilize heavier SS109 ammunition. Standard sights are a front post and a rear rotating diopter drum. The combo offers the best iron sights I’ve used on a standard battle rifle. 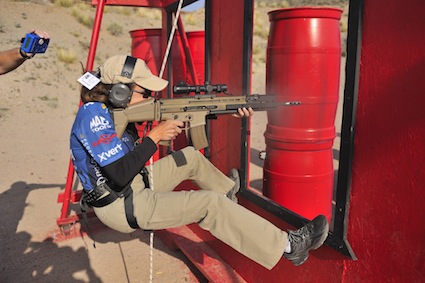 Widely regarded as one of the finest battle rifles in the world, the Sig…