The SIG551-A1 is the rifle most closely patterned after the SGW550, which was adopted in 1990 as the standard infantry rifle for the Swiss Army and citizen militia. Differences between the two rifles are few: the SGW550 has a forged steel trigger housing and select-fire mechanism, a 20.5-inch barrel with a slower rate of twist than the SIG551-A1 (with its 16-inch barrel and 1-in-7-inch twist), a bayonet lug, tritium night sights and a handguard with an integral folding bipod. Because of the longer barrel, bipod and steel trigger housing, the SGW550 is also much heavier than the SIG551-A1.

The SIG551-A1 shares many features of the SIG556, which was the company’s first semi-automatic rifle sold in the U.S. in many years, but departs from that design in a few areas. The most significant difference is the use of a more substantial forged aluminum trigger housing assembly modeled closely after the SGW550 and the same magazine and loading technique as the SGW550. In contrast, the SIG516 has a stamped-steel trigger housing assembly and uses M16 magazines. 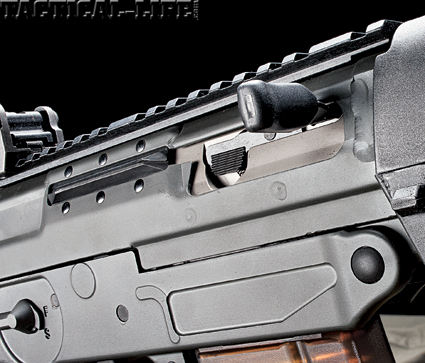 The charging handle (left) is easy to reach and quick to get in action. 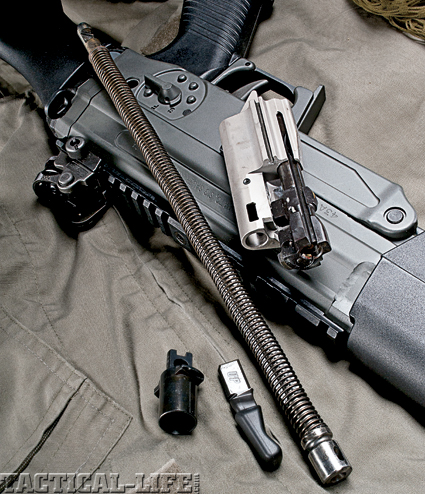 Field-stripping the SIG551-A1 is easy and shows that the bolt (riding inside the bolt carrier), piston rod with spring, charging handle and gas plug have less fouling.

All major parts for the SIG551-A1 are made by Sig Sauer at its New Hampshire factory, except the folding stock and magazines, which are imported from Switzerland and are the same as those used in the SGW550. The SIG551-A1 is comprised of an upper receiver and a lower “trigger casing assembly” that are joined with a pivot pin at the front and takedown pin at the rear. The two units are tightly fitted without play. Attached to the forged aluminum trigger casing are the fire control parts, magazine release, bolt catch and rear stock assembly. It is hardcoat anodized in matte black.

Unlike the AR-15, the upper on the 551-A1 is the serialized receiver, which is considered the firearm for ATF purposes. It is made from stamped steel and finished with black Nitron. Its assembly contains the bolt and gas piston assemblies, gas block, front sight, barrel and handguard. It has a top-mounted Mil-Std-1913 rail. In case you want more rails, Sig Sauer offers an optional rail mounting kit that will work with two additional 0.13-inch holes in the forward portion of the handguard, as well as on the underside of the forend. Parts on the SIG551-A1 are well fitted and the receiver-trigger housing fit together with only a bit of discernible play.

The 16-inch barrel is button-rifled with a 1-in-7-inch twist. This is a significantly faster twist rate than most rifles chambered in 5.56mm NATO and reflects the recent trend towards using heavier, thus longer, bullets. Longer bullets require faster twist rates to stabilize during flight. Even the SIG556, which debuted in 2007, comes with a 1-in-9.5-inch twist rate. The barrel is threaded and equipped with a 2.5-inch-long flash suppressor. 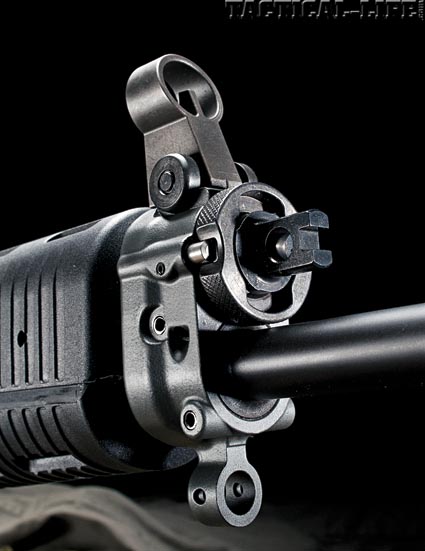 The gas plug, located above the barrel and below the windage-adjustable hooded front sight, has two positions for when the rifle is clean and when it’s running dirty.

Gas System
The SIG551-A1 has a two-position, quick-adjustable gas system. One position is for normal operation, and the other is only to be used for when the rifle runs sluggishly due to extreme fouling. Rotate the stainless gas valve manually to make the adjustment. The entire gas system assembly is constructed of stainless steel and is built to fairly close tolerances. Tight tolerances are important to accuracy since inconsistent vibration from a loose fit affects barrel harmonics and will degrade accuracy.

Gas is vented from the barrel through the gas block located on the barrel just forward of the handguard through an adjustable gas port. The gas impinges on the stainless steel gas piston, which is an integral part of the operating rod that is contained within the gas tube. The rod moves the bolt carrier rearward, which causes the bolt to rotate, unlock from the barrel and move rearward after firing.

The SIG551-A1 uses a recoil spring that rides above the barrel inside the gas tube, unlike the AR-15, which has a buffer assembly behind the receiver. AR-15 buffer limits the type of stock that can be used. The SIG551-A1 comes with a sturdy side-folding stock that locks firmly in place either open or closed without any wobbling. With the stock folded, the rifle is only 26 inches long, compared with 31.5 inches for a 16-inch-barreled AR-15 with its stock collapsed. Accessing all controls and firing the SIG551-A1 is also possible with the stock folded. This has obvious tactical advantages, including discrete carry or stowage in a vehicle. Four sling mounting points underscore the rifle’s many possible carry methods: two on the stock, one at the rear of the receiver and one on the front-left side of the gas block assembly.

The rifle comes with two light-brown, translucent-plastic 30-round magazines that use stainless steel springs. The magazines have markings (10, 15, 20, 25, 30) indicating how many rounds remain, but the remaining ammunition load is also clearly visible through the translucent plastic. The magazines can be ganged together “jungle-style” using two interlocking tabs, enabling an operator to carry 60 rounds at the ready.

Loading and unloading the SIG551-A1 is like the AK-47 and SIG556R. Simply tilt the magazine forward at about 40 degrees and insert the leading edge so that the protrusion on the forward edge of the magazine catches the lip of the trigger housing assembly, then rock the magazine rearward to engage the rear tab on the magazine with the AK-47-type magazine release catch. The magazine release is mounted on the forward edge of the triggerguard like the AK-47, but it is longer, serrated and accessible with the index finger. Charging is accomplished using the reciprocating charging handle, which is covered with a thick rubber boot. A unique feature on this rifle is the flexible rubber split-seal dust cover that surrounds the slot in the upper receiver where the charging handle travels and keeps debris out of the action. 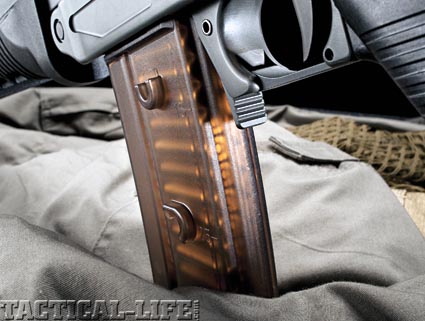 Note the long, serrated mag release lever just in front of the trigger.

The action locks open after the last round is fired and can be manually locked open using the bolt catch located on the left side of the receiver, forward of the safety. The catch is large enough to engage quickly using the thumb of the left hand when holding the rifle by the magazine well.

The rifle’s grip is comfortable and has a hinged bottom for stowing batteries or small parts. The removable winter triggerguard is identical to the AR-15 and intended for use with heavy gloves. The safety is ambidextrous, and is wider and operates with less arch of movement than an AR-15’s. However, I had to readjust my grip to apply it or use the non-firing hand. 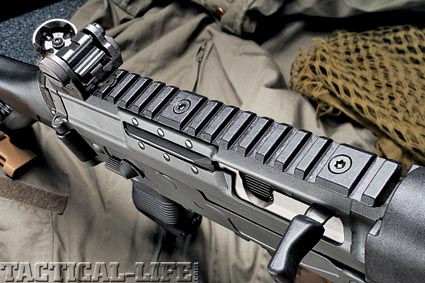 Equipped with a flattop Picatinny rail for mounting optics, the SIG551-A1 also comes with an adjustable diopter rear sight

The SIG551-A1 is equipped with iron sights. The front is a hooded post that is adjustable for windage using an Allen wrench, while the rear sight is a fully adjustable diopter drum-style with four settings: a “V”-notch for CQB sighting and three apertures marked 100, 200 and 300 that correspond to meters and are calibrated for the M193 (FMJ) or M855 (tracer) 55-grain NATO loads. The rear sight is removable with an Allen wrench and mounts on the rear of the Picatinny receiver rail. To calibrate the rifle to the rear sight, select a setting on the drum and fire a group from a solid shooting position at that distance. Make corrections by rotating the elevation adjustment disk and windage adjustment knobs. Each click moves the point of impact 0.5 MOA.

Though the SIG551-A1’s two-stage trigger has some creep and considerable over-travel, it was very smooth with a fluid feel. My Lyman electronic scale measured the trigger pull weight at a hefty 8.6 pounds, but it feels less because the first stage is about 5.9 pounds followed by a lighter second stage of 2.7 pounds. It takes practice to find the exact place where the sear will release during the second stage. 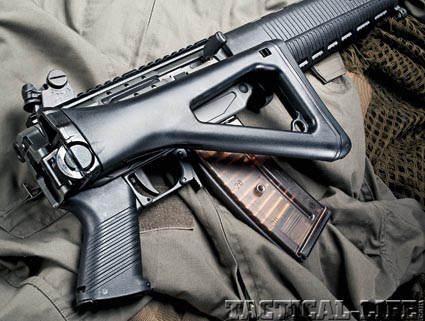 Similar to the design used on the SGW550, the rear stock is sturdy and can fold to the right. When folded, the charging handle and ambi controls can still be accessed, making the SIG551-A1 deployable when compact.

Range Time
I tested the SIG551-A1 for accuracy by mounting a 3-12x scope and shooting off a rifle rest at 100 yards. This rifle is reasonably accurate for a 16-inch-barreled tactical rifle and could be more so with an improved stock and lighter trigger. Though a 1-in-7-inch-twist barrel is better suited to bullets weighting 69 grains and above, the SIG551-A1 shot lighter 55-grain bullets into an average five-shot group of 3.2 inches. The best group of 1.65 inches was turned in with Winchester 69-grain Match Ranger. Note that although these groups would improve with a target trigger and rear stock with a more substantial cheekrest, the SIG551-A1 is designed for CQB—not the role of designated marksman.

The supplied diopter-style rear aperture and hooded front post sights were also informally tested at 50 yards. These sights are easy to acquire, adjust and are very usable. However, the rear sight is not quick-detachable and a forward-mounted holographic sight that is co-witnessed with the iron sights would be a good option for Sig Sauer to offer. Note that the receiver-mounted Picatinny rail also contains a flip-up emergency backup aperture sight that is adjustable for elevation, but mounting the removable diopter sight precludes its use.

Deploying the SIG551-A1 with the stock folded is possible, though only to be used in extreme close-quarters fighting, where the 26-inch length is tactically necessary. The charging handle and controls are easy the reach. Firing the rifle with the stock folded did not interfere with ejection and was quite controllable, though it did affect the balance. The stock is very well made and snaps into place, or folds quickly and attaches to the handguard. The length of pull is 13 inches, which is a bit short for me but ideal when wearing body armor.

Final Thoughts
The SIG551-A1 is well designed and comes with many useful features that would be aftermarket accessories on other tactical rifles, such as aperture iron sights, an ambidextrous safety, multiple sling mounting points, folding stock and a handgrip with stowaway compartment. It is reliable and fits into an extremely compact package due to its side-folding stock—an important consideration when traveling in vehicles and aircraft. For those seeking an alternative to the AR-15, the SIG551-A1 should be on the “A-list” of rifles to consider. Find out more information by calling 603-772-2302 or by visiting sigsauer.com.