0
SHARES
168
VIEWS
Share on FacebookShare on Twitter
For greater versatility, the SIG551-A1’s safety selector is ambidextrous and the sling attachment point above the stock is reversible.

Sig Sauer, having begun 150 years ago as a Swiss wagon manufacturer that started out in the gun business by making muskets for their nation’s military, is today manufacturing some of the best semi-automatic rifles available in the U.S. While Sig remains primarily known as a pistol manufacturer to many American shooters, especially popular among federal law enforcement, its military rifle tradition is a storied one.

“Swiss made” has long been synonymous with high quality, and when it comes to their national defense, this commitment to reliability, effectiveness and attention to detail is carried to the Nth degree. In the 1970s, Sig teamed up with German firearms firm Sauer & Sohn to manufacture pistols and import firearms to the U.S., but they never stopped working with the Swiss military—including producing the current-issue SG550. 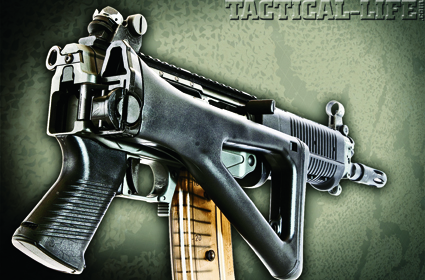 The Swiss-style folding stock on the SIG551-A1 easily folds out of the way and brings the
SBR down to a usable 19.7-inch length.

This rifle’s reputation drove demand in the U.S. but it had been largely unavailable thanks to restrictive import laws until the company began building rifles at their Exeter, New Hampshire, facility a few years ago. In addition to a full line of AR-style and Swiss-inspired tactical rifles and pistols, they are now increasing their production line and aggressively marketing complete short-barreled rifles, or SBRs. In addition to being available to the law enforcement market, they are also offered for sale on the civilian market where legal.

The SIG551-A1 is based upon the original military Swiss SG550 series, minus the full-auto capability. It is available in two styles—one with a standard handguard, and one known as the “SWAT” model because of its quad-rail forend for adding accessories. I was given the latter for this review. This semi-automatic rifle, chambered in 5.56x45mm NATO, uses a long-stroke gas piston method of operation where the bolt and piston rod all move as one big unit, similar to that found on the AK series of rifles. This mass moving back and forth provides very reliable operation.

The piston-driven system also keeps the carbon fouling at the front of the gas system and mostly out of the receiver. This helps to reduce operating temperatures inside the receiver, and the gun requires less lubrication. It also makes cleaning a less stressful affair. At the front of the gas system, the SIG551-A1 features an adjustable valve that can be rotated to increase the gas pressure to keep the rifle running even in the case of extreme fouling, which could otherwise affect functioning. Many of the components of the gas system are also made from stainless steel to provide an added margin of corrosion resistance. 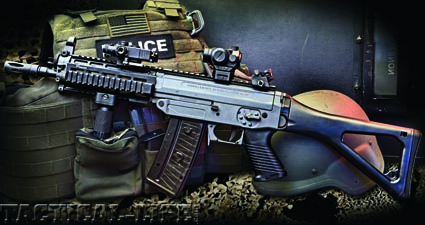 The SIG551-A1 SBR is a powerful entry weapon based on the original Swiss military SG550. Shown with Sig’s Mini Red Dot and foregrip, and a Laser Devices DBAL-I2 mounted on the optional quad-rail. 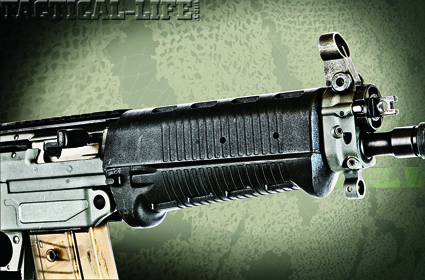 Sig Sauer offers the 551-A1 with either its military-style polymer handguard (shown) or in SWAT configuration, with a quad-rail forend.

The SBR version of the SIG551-A1 features a 10-inch, mil-spec, chrome-moly barrel with a 1-in-7-
inch twist rate and a Swiss-style flash suppressor. The trademark 550-series flash suppressor is attached with threads, so an operator or LEO can quickly add a sound suppressor when needed to reduce the magnified report and muzzle flash that SBRs produce compared to carbines.

Underneath the flash suppressor, the rifle features standard threads for the easy installation of aftermarket accessories and suppressors. As suppressors become more popular, many shooters are also expressing a preference for SBRs as a way of using their suppressors while keeping the overall length of their rifles at a minimum. This, in turn, increases maneuverability in tight quarters, such as inside vehicles or buildings.

The aluminum quad-rail handguard on the SWAT version of the SIG551-A1 provides 6 inches of usable real estate on the right and left side as well as 5 inches underneath. The top of the handguard features a Picatinny rail that joins with that on top of the receiver for nearly 14 inches of uninterrupted space for optics. The rails do have some sharp edges, so some users may prefer rail covers for comfort. 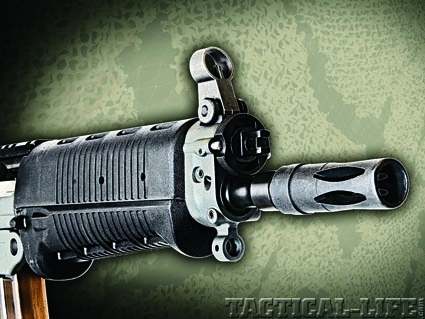 The gas system adjustment valve, just above the barrel, allows the SBR to run reliably while suppressed or heavily fouled.

The sights include a fixed HK-style hooded post front sight, which is windage-adjustable with the use of an Allen wrench. The adjustable diopter rear sight, also in the style of HK sights, is removable, if needed, for ease of use with optics.

The receiver itself is essentially two parts, with an upper and lower both made from stamped steel with a grey Nitron finish that provides an even color as well as corrosion and wear resistance. The controls on the SIG551-A1 are very straightforward and easy to master, albeit somewhat different than those found on an AR. The one that required the most getting used to was the bolt hold-open/bolt release lever on the left side of the receiver, which works opposite of what one would expect. To lock the bolt in the open position, the bolt release has to be pushed down. To release the bolt and chamber a round, it has to be pushed up. 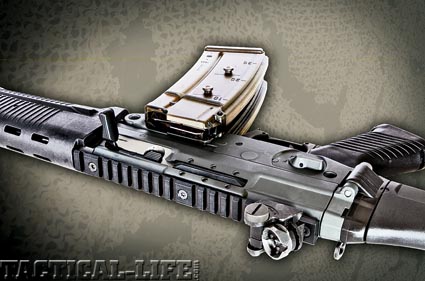 The SIG551-A1’s top rail has plenty of space for mounting optics. The Sig magazines also lock together easily for fast reloads.

The magazines themselves are the original Swiss polymer 20- and 30-round variety and amber in color. It is very easy to see how many rounds remain in the magazine, and they are built tough. These magazines also have an ingenious feature—two tabs on either side that act like a built-in magazine coupler, allowing multiple magazines to be joined together for very rapid reloads. Other controls include the ambidextrous safety selector, which rotates down approximately 45 degrees to place the rifle into the “fire” mode. The selector can be easily reached by the operator’s thumb, but it is still high enough so that it will not interfere with the shooting hand, which can occur with ARs that have ambidextrous safety selectors.

A polymer, well-sized pistol grip with internal storage space is found at the back of the receiver. The grip is larger than that found on a standard AR but fills the hand well and includes horizontal grooves for a better grip. The receiver buttcap also includes a single sling attachment point on the left side that is reversible as well.

The folding stock is also originally made in Europe and imported for this rifle. The distinctive styling makes it quite attention-grabbing and it folds very easily, locking into a tab on the right side of the handguard. The rifle can be operated and fired with the stock folded, which leaves the complete rifle at a total length of less than 20 inches. Deploying the stock is also very fast and provides a very sturdy and comfortable cheekweld for much more accurate fire. Even fully deployed, the whole rifle is still a very neat 29.8 inches. The skeltonized stock design reduces weight and there is also a sling attachment point at the rear.

The trigger housing is well-sized and features an AR-style, fold-down triggerguard for use with gloves. The trigger itself is an interesting two-stage design with a nearly flat contour and only a slight curve at the bottom. The initial take-up has a short travel and weighs about 3.5 pounds. At the back of the trigger there is an adjustable pressure-point screw that protrudes conspicuously to meet the trigger at the point where the sear engages and provide for the second stage. The actual trigger break is very clean and crisp, though the total trigger weight was around 7 pounds and showed some overtravel.

Operating the SIG551-A1 is a simple matter of inserting a full magazine and then retracting and releasing the right-side charging handle. As on an AK rifle, the SIG551-A1’s charging handle protrudes prominently and reciprocates under fire. If needed, it could also be used as a forward assist to seat a recalcitrant round. Take note: The rifle should always remain with the safety on during this process to ensure maximum safety.

Field stripping the SIG551-A1 for routine maintenance and cleaning is a simple matter. Ensuring it is unloaded, the magazine removed and the bolt in the forward position, push out the rear takedown pin in a manner similar to the AR. This allows the upper and lower receiver to rotate at the front takedown pin point. Next, press down on the charging handle catch, located on the bolt carrier, and remove the charging handle. This separates the bolt carrier from the operating rod and allows for the bolt carrier and bolt to easily slide out of the back of the receiver.

To remove the gas system, simply depress the stop pin at the front, rotate the gas tube and remove it. The gas valve and operating rod assembly can then also be easily separated and cleaned. When reassembling, make sure that the gap at the rear of the operating rod is facing downward so that it can be connected to the bolt carrier with the charging handle. When disassembled, the operating system’s similarities to the AK become very apparent as well.

On the range, the SIG551-A1 handled easily and was very comfortable to fire. Recoil was also very negligible and muzzle blast was minimal thanks in large part to the effective flash suppressor. Its functioning was flawless, as can be expected from anything associated with Swiss manufacturing. Indeed, Sig Sauer has tuned the gas systems on all of their new SBRs to function reliably with the shorter barrels.

My opportunity to test this SBR was limited to a single day at the Sig Sauer Academy range adjacent to the Exeter, New Hampshire, factory. The testing was limited to one type of ammunition, Federal Premium .223 Remington 69-grain boat-tail hollow points, and no chronograph was available for velocity. It is common for .223 Remington ammunition to lose 50 feet per second (fps) in velocity for every inch of barrel lost, so a 300 fps drop in velocity would be standard on this SBR.

I fitted the SIG551-A1 with an Aimpoint Micro T-1 red dot sight for accuracy testing at 60 yards from an improvised bench rest. Despite the less than ideal conditions and lack of a magnified optic, the SIG551-A1 still consistently placed five shot groups into 1.25- to 1.5-inch clusters. In all, the SIG551-A1 SBR proved to be an outstanding rifle that provides a very compact package and significant firepower with room for accessories.