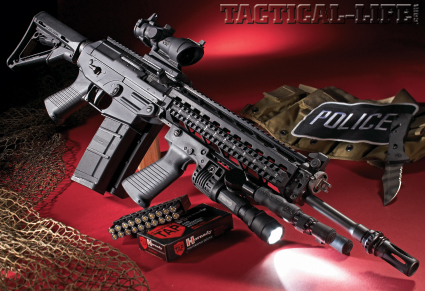 I’ve been a fan of the Sig Sauer 550 for at least 20 years, and truly believe it is the best 5.56x45mm battle rifle ever. So I was thrilled when I heard rumors that Sig Sauer was considering producing a version of the 550 in the US. Then, on a visit to Sig Sauer, I learned that the carbine would not actually be a 500, but a hybrid between the 550 and AR15. I was glad that even a partial 550 would be readily available, but I was a bit skeptical. Once the SIG556 was introduced I saw things about it I liked. Simply, it combined many aspects of the 550 upper with a lower designed to take AR15/M16 magazines. It also showed typical Sig Sauer quality. In fact, the SIG556 combines the best features of three excellent carbines: the SIG 550, AR15, and AK47.

I considered the SIG556 an excellent carbine, one of the best on the market. I’ll admit, however, that I was a bit prejudiced because it used a CAR-type telescoping stock. My 550’s side-folding stock is the most comfortable I’ve ever used, and I missed it on the SIG556. On the other hand, the SIG556 has a Picatinny rail, which allows quick mounting of optical sights. The well-designed cocking handle and safety/selector levers are the same as on the 550. An AR15-type magazine release on the SIG556 is different from the 550’s paddle release, but I don’t mind that, since I shoot AR15s a lot and instinctively use my trigger finger to operate this style magazine release. The five-port flash suppressor is different from the 550’s but does the job just fine. 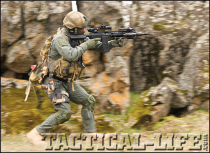 My 550 has a 1-in-9-inch twist, 6-groove barrel, while the SIG556 has a cold hammer forged 1-in-7-inch twist 6-groove barrel. The SIG556 twist will stabilize heavier bullets and also allow the use of tracer ammo. The adjustable gas piston system and rotating bolt are similar to the AK series of rifles and is an extremely reliable operating system. There are some improvements in the AK system incorporated into the SIG556. For example, the SIG556’s recoil spring is around the operating rod, which allows a shorter receiver. The gas cylinder is fabricated of stainless steel and the gas piston is chromed. The SIG556’s gas tube is easily removed for cleaning. All of these are good features.

The SIG556 that I had been waiting for is the SWAT model in flat dark earth with a side folding stock. While I did not feel the telescoping stock on the original SIG556 was particularly noteworthy, the side folding stock is. As with FNH’s SCAR, this stock telescopes so that length of pull can be changed to fit different arm lengths and to adjust when body armor is worn, but it also folds to the side to keep overall length folded to 28 inches. This stock is also very comfortable when shooting. With the stock folded, it is possible to operate the cocking handle and the trigger, but one cannot reach the magazine release button.

Accessory Rail
The SIG556 SWAT also incorporates a MIL-STD-1913 quad rail with 10-inch top and side rails, and a 7.25-inch bottom rail. The SWAT model comes with a vertical foregrip that has a built-in light carrier. Since the rails make the SIG556 SWAT model a bit heavy forward, the vertical foregrip is a useful feature. The inclusion of the light mount and light is a plus. The only problem is that the foregrip/light carrier is impossible to remove without substantial takedown of the rifle. I like being able to attach a vertical foregrip and/or light. When I zeroed the scope I had mounted on the SIG556 SWAT it was virtually impossible to shoot from a rest comfortably with the foregrip in place, which made zeroing more difficult. 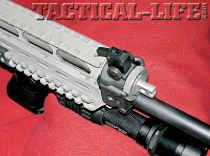 The SIG556 SWAT comes with polymer 30-round magazines that can be coupled so that a spare magazine rides next to the one in the magazine well. The 550 magazines have this feature, which I have always liked.

I worked on one security detail where we had two 550s available to the team members who patrolled the estate or were in the gatehouse. We kept them each with a pair of fully loaded 30-round magazines in place. Another time we had 552s, which have shorter barrels, available for carry in team vehicles. For deployment from a vehicle I always preferred a pair of coupled 20-round magazines. The coupling system on the 550 magazines and SIG556 magazines allows one to couple three or even more magazines, but I always found that more than two was unwieldy and added too much weight. I always carried the 550 or 552 with the left side magazine in the rifle so that when it was dry I pulled the magazine from the well, moved my hand slightly to the left and inserted the loaded magazine. I found this system was very natural. Certainly, if one uses the linked magazine feature for the SIG556, I would recommend this system for anyone who is right-handed. Note that the SIG556 will take standard M16/AR15 magazines as well. By the way, the SIG556’s magazine well has a sturdy flared lip that helps guide magazines in during a fast change.

Among other features is a hold open when the last round is fired. Once the magazine change has been carried out, the bolt may be released using the cocking handle or via a button on the left side of the receiver. Using the magazine change drill I described above for a pair of coupled magazines, it is faster to work the bolt release with the left thumb.

Sights & Optics
The SIG556 SWAT incorporates very basic flip-up iron sights, which are a good usable peep rear/post front combo. Since this carbine will normally be used with an optical sight, they will suffice. The MIL-STD-1913 rail atop the receiver allows the user to mount a wide array of optical sights. I wanted to keep the weight down on the SIG556 SWAT but also wanted an optical sight that would let me quickly engage at CQC ranges or reach out further. I have used SIG550s with a Trijicon ACOG (Advanced Combat Optical Gunsight) mounted and found the combo excellent, so I decided to use an ACOG on the SIG556 SWAT. One of my favorite ACOGs is the RCO (Rifle Combat Optic) used by the USMC, so that was my choice.

The Trijicon TA31RCO-M4CP has proven itself in service with the USMC and offers an excellent day/night 4X optic, which is quite compact. Only 5.8 inches overall and 9.9 ounces in weight, the RCO allows the SIG556 SWAT with scope mounted to remain under 9 pounds.

The RCO employs a red chevron reticle, which I find very fast, especially when bringing the carbine up from the ready position, since I have learned to stop and engage as soon as the tip of the chevron is on target. As with other ACOG scopes, the RCO is designed to be zeroed at 100 meters. For engagement at longer ranges, the post and chevron may be used without having to adjust elevation. The interior point of the chevron is the aiming point at 200 meters, the top of the post at 300 meters, and stadia lines at longer ranges. It takes some practice to use this system quickly, but once you do, it is very effective.

The RCO does not need batteries for illumination. The chevron and top of the post show red at night due to tritium inserts. There is also a fiber-optic tube atop the RCO, which adjusts brightness of the chevron based upon available light. For example, in bright sunlight it enhances the chevron so it is easily seen, while in low light, the tritium provides the proper amount of illumination. ACOG optical sights are designed for use with both eyes open, which allows very fast target acquisition in CQB mode. 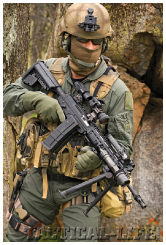 Shooting Impressions
Since the SIG556 SWAT has a 1-in-7-inch twist, I did my initial zeroing with surplus SS109 ammo. I also took along some Black Hills 68- and 77-grain loads. As I mentioned earlier, the fact that the vertical foregrip/light mount cannot be readily detached makes it difficult to shoot from a rest. By bracing my arms on a shooting bench I did manage to get a fairly solid position for shooting groups to get the scope zeroed. Even with surplus SS109, which is not renowned for its accuracy, I managed a 100-yard group of an inch, though 1.5 to 2 inches was more common. Once the RCO was on, I tried some groups with Black Hills 68-grain loads. As expected, point of impact was a bit different than that of SS109, but accuracy was good. At 200 yards, most of my groups were around 3 inches, with the best about 2.5 inches. I decided to leave the RCO setup for the SS109. Ammo is expensive these days, but I have a few thousand rounds of surplus SS109 left so figured I would do most of my shooting with it.

As I mentioned earlier I don’t normally use a vertical foregrip, but I did find it useful when I was shooting offhand at hanging plates at 100, 200, and 300 yards. The SIG556 SWAT handles quickly and is super for moving among targets. Since I have used the RCO for a couple of years now, I am fairly adept at acquiring the chevron quickly and switching over to the top of the post for 300 yards. That helped me shoot well with the SIG556/RCO combo.

The cocking handle, safety, magazine release, and bolt release are all well located and allowed me to shoot the SIG556 SWAT smoothly and carry out magazine changes readily. Reliability was 100%. I fired 150 rounds during my first test session with no malfunctions. I didn’t clean the SIG556 SWAT and put another 120 rounds through the gun on my next range session. It was still functioning reliably without adjusting the gas valve.

Final Notes
I started off talking about how much I like the 550. I still do. I’m not ready to say that the SIG556 SWAT is better than the 550, just different. Right now, one of the relatively few semi-auto 550s imported into the US before the first assault weapons ban will cost $7500 or more. You can purchase a SIG556 SWAT for less than one-third of that amount. The 550 has a 20-inch barrel, while the SIG556 has a 16.25-inch barrel, which makes it handier.

I think the SIG556 SWAT offers an excellent 5.56x45mm battle rifle for law enforcement or military personnel who appreciate the legendary quality of Sig Sauer rifles.

In Praise of the M16 Rifle