0
SHARES
149
VIEWS
Share on FacebookShare on Twitter
The SIG556R is a quality, piston-driven rifle that is chambered for the venerable Russian 7.62x39mm cartridge, which is inexpensive and plentiful. Compact and made to high tolerances, the SIG556R can fold for greater versatility. Shown here with a Sig Mini Red Dot.

Over the years, the Sig Sauer SIG556 has gained a worthy reputation as a superbly built piston-operated rifle. Up until recently, if you wanted the SIG556, your only caliber choices were indeed the 5.56x45mm NATO round and .223.

This changed recently when Sig introduced the new SIG556R, with the “R” for Russian. Built with all of the original quality features, the SIG556R not only chambers the 7.62x39mm Russian cartridge, but it also feeds from all standard AK magazines as well. Many companies have attempted to build black rifles chambering the 7.62x39mm cartridge while loading them from modified AR magazines. That formula seldom proved reliable, however, and the magazine issue has historically been a problem.

The skeptic might ask, “Why 7.62x39mm?” Let’s address that issue. First, not everyone out there is a fan of the 5.56mm cartridge for a fighting rifle. I’m not going to take sides in that debate, but the fact remains that, for many shooters, fighting rifles start at .30 caliber.

American-made 7.62x39mm ammunition is head and shoulders above what it was 20 years ago. In addition to the standard 123-grain FMJ loads, there are a number of controlled-expansion rounds with ballistic tips and expansion cavities. CorBon and Hornady come immediately to mind in this category. Should the shooter have the need to engage two- or four-legged predators, they have many choices for ammunition.

On the flipside of that coin, the price of centerfire rifle ammunition over the last five years has gone from costly to damned near ridiculous. Not only did the cost skyrocket, but ammunition manufacturers are just now starting to catch up with demand, and shortages of popular calibers, .223 included, have been frequent.

Lacquered steel-cased 7.62x39mm ammunition has historically been a better price deal than brass-cased .223 or the hotter 5.56mm. When purchased in bulk lots, 7.62mm Russian cartridges offer shooters even greater savings. For folks who train, practice and shoot a lot, saving five to ten cents a cartridge will add up quickly. 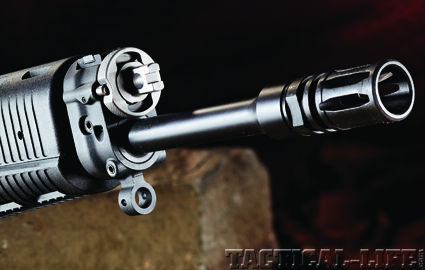 The 16-inch barrel is capped with a NATO-style muzzle brake/flash suppressor. at the front of the forend, there is a gas adjustment knob. 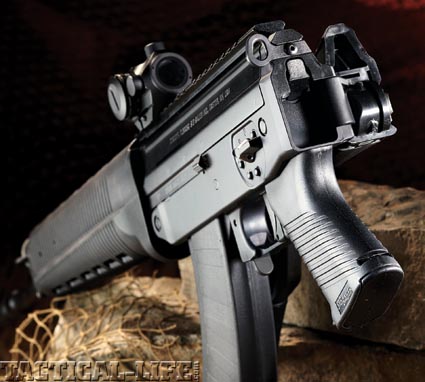 Gun Details
The SIG556R, as touched on previously, is a semi-automatic, gas piston-operated rifle. I found the piston system to be ingeniously simple, with only a few parts to clean and lubricate.

Regarding manual controls, the bolt charging handle is located on the right side of the firearm, in the same location as the AK, and there is a bolt catch on the left side of the receiver. Please note: Sig Sauer ships the rifle with its bolt handle removed and stored inside the empty pistol grip. Read the instructions before you call them and make yourself look silly.
The manual safety lever is ambidextrous; up for safe, down to fire. Besides the trigger, the only other controls are the bolt catch and magazine release lever. The magazine release is again based on the original AK design, making it centrally located and ambidextrous.

The SIG556R is composed of two receivers: the upper and lower. Fashioned after the Stoner design, the upper and lower receivers are mated together using a takedown pin and pivot pin. The upper receiver utilizes a 16-inch barrel with a NATO-style muzzle brake/flash suppressor. Sig Sauer rifles the barrel with a 1-in-9.5-inch right-hand twist. A black polymer forend surrounds the barrel. The upper receiver housing uses a flattop Mil-Std-1913 rail. Sig Sauer includes one of their Mini Red Dot optics with each SIG556R rifle shipped.

Supporting the action is the lower receiver, which is a combination of the collective genius of both Stoner and Kalashnikov engineering. The receiver is fed with traditional 7.62x39mm Kalashnikov magazines, and it will accept magazines from the little five-round “sport” model to the 40-round RPK version. I know what you are thinking: What about the 75-round drums? Unfortunately, the answer is no. The drum magazines will not seat in the SIG556R.

You’ll find a retractable/folding stock at the rear of the rifle. By depressing a button on the left side of the stock, you can fold it over and secure it to the right side of the rifle. Yes, the gun will function with the stock folded if you should feel the need. When locked open, the stock retracts and adjusts for length of pull. A single-point sling adapter is affixed to the rear of the receiver just ahead of the stock, and it can be reversed from left to right by an armorer. 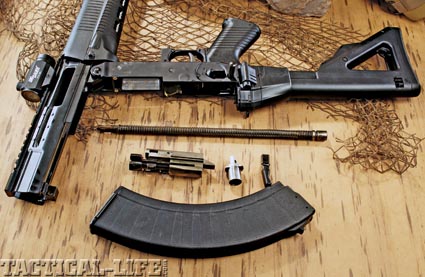 The piston system, which operates cleaner than a direct impingement system, is easy to disassemble for maintenance. There are only a few parts.

Shooting Impressions
The SIG556R arrived with a single, black polymer 30-round magazine. Naturally, I would want more than that for an evaluation. Century Arms has become my go-to source for all things AK. I found exactly what I was looking for in their latest catalog: 30- and 40-round polymer magazines from Bulgaria and a bulk can of Yugoslavian-manufactured 7.62x39mm ammunition built with brass cases. The ammunition comes in 1,200-round cans and is a fantastic value.

Additional 7.62x39mm ammunition came from CorBon in 123-grain DPX and 125-grain JHP loads. Hornady offers 50-round bulk packs now with 123-grain SST bullets in lacquered steel cases. Wolf ammunition was a natural fit with their Military Classic 123-grain FMJ load. The only other option I added to the rifle was a BlackHawk single-point sling.

Step number one at the range was to bench the rifle and check the zero on the included Mini Red Dot sight. Ten rounds later, I was striking a 1-inch square at 50 yards. Now it was time for chronographing and bench work. Using the red-dot sight and resting the rifle on a pack provided very good results. However, this is not a bench rifle, it’s a fighter, so we needed get away from the table get it warmed up.

First up on the practice agenda would be simple contact drills. Cardboard silhouettes were engaged at relatively close distances from 5 to 15 yards. All of the previously mentioned loads were thrown into the mix with a heavy emphasis on the Century and Wolf loads because I had more of them. 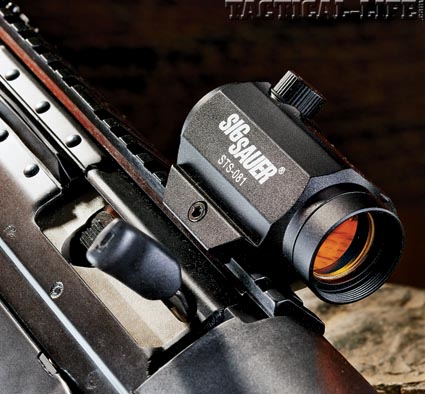 The Sig Sauer Mini Red Dot is a great optic for close to moderate ranges and can be adjusted with the dial on top.

After about three to four magazines full of ammunition, we went to work on the reactive steel targets set out from 100, 200 and 300 yards. The whack of bullets striking steel echoed back regularly. The 100-yard plate was easy enough. At 200 and the 300 yards, a greater amount of attention to detail was required. The red aiming dot of the Sig sight is a bit large for distant precision fire, but the SIG556R wasn’t exactly built for long ranges.

While testing the rifle, I ran somewhere in the neighborhood of 500 rounds through the gun during separate range sessions. During multiple target drills, I ran the gun with the 40-round RPK magazines until the barrel was too hot to touch.

The SIG556R consumed every piece of ammunition fed to it without hesitation. This is particularly important when considering the lacquered steel case ammunition and bulk military surplus. You don’t buy a 7.62x39mm rifle so you can practice with expensive ammunition.

During the testing period, I mainly ran the included factory magazine and the Bulgarian models from Century Arms. However, I did throw in a couple of steel 30-round magazines and they worked just fine. The Sig Mini Red Dot performed as advertised. Should you desire to add a magnified optic, the Picatinny rail makes that simple.

As far as maintenance is concerned, the rifle was easy to disassemble for cleaning. Keep in mind that much of the military-surplus ammunition out there uses corrosive primers. The ammunition works just fine, but you do need to clean your rifles after shooting them.

Final Notes
The SIG556R is not a stamped sheet- metal AK; it is first and foremost a Sig Sauer, meticulously machined and well-made. As such, don’t go into sticker shock at the price tag. You get what you pay for. In this case, you get an exceptionally well-made rifle that will not only chamber the plentiful and less-expensive 7.62x39mm cartridge, but you can also feed it from ultra-reliable AK magazines.