0
SHARES
7
VIEWS
Share on FacebookShare on Twitter
Sig Sauer has brought a true contender to the 7.62mm NATO rifle market. Most of what an operator needs for duty comes standard on the SIG716, making it about as patrol ready as any system out there. Shown here with a Leupold Mark 8 1.1-8x24mm CQBSS riflescope and Delta Point Reflex sight.

One thing has become evident after a few years of testing rifles: Given time and continued demand, things improve. In terms of weapons evolution, the 7.62x51mm chambering in the AR platform is still pretty young. Though this platform was originally created in this caliber and has been around a long time, a truly consolidated effort to truly improve the system in 7.62mm only began in the last few years.

Much of this has been driven by various military contracts. Although the primary driving force, the rest of the gun world has been clamoring for a 7.62mm AR as well. The 7.62x51mm NATO cartridge is prevalent throughout the world and remains one of the most popular rifle cartridges available. It has proven to be versatile, accurate and reliable, making it a very popular caliber—especially in military-style rifles. 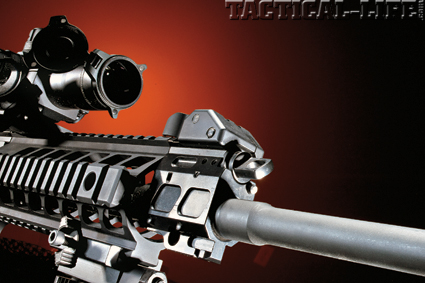 The added rail space on the gas block allows for flip-up sights that maintain the proper sight ratios for a big-bore rifle. Note the adjustable four-position gas switch above the barrel.

It is demand that drives innovation, and the demand for an AR-type rifle in 7.62mm has been pretty high. Much of this demand has focused on piston-driven systems in barrel lengths of 16 inches or less. Whether you see the need for a piston gun or not, they have occupied a large part of the market for the last few years and continue to do so. For most police agencies or other professionals, a 16-inch barrel is close to perfect for most operations, and gas piston systems are great so long as they work. They each have their own strengths and weaknesses. It all really depends on what you need or want and how well they are built. 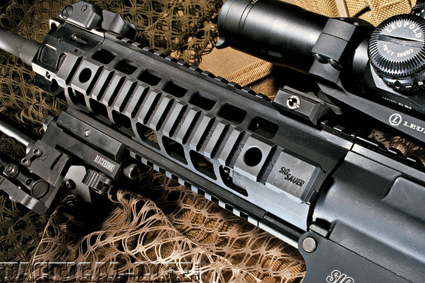