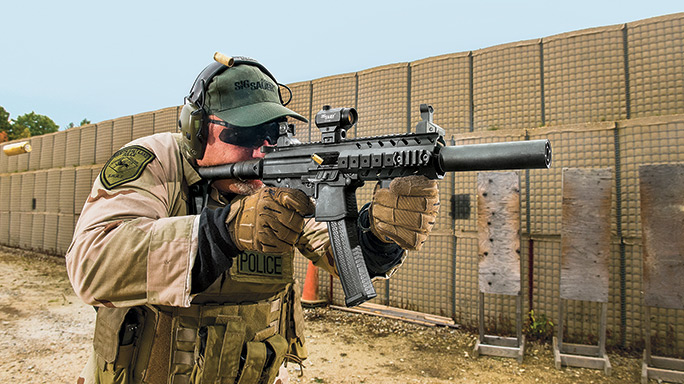 1 of 5
Multi-Cal Machine’s: Sig Sauer’s MPX and MCX Series
The MPX was built for total reliability—even while fully suppressed with a SIG-SD Silencer—as this early prototype demonstrates. 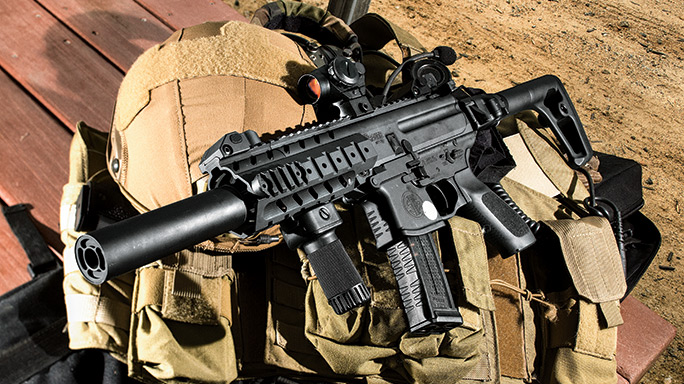 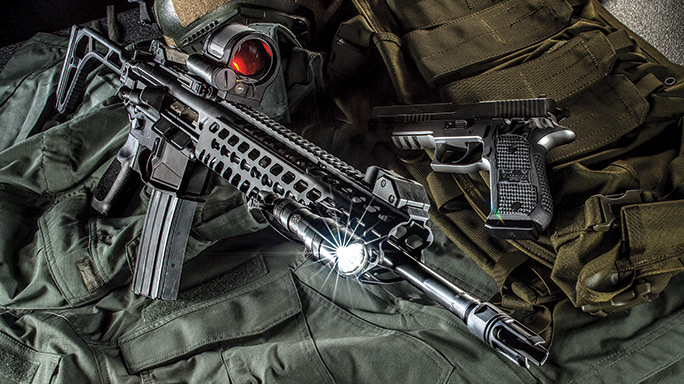 3 of 5
Multi-Cal Machine’s: Sig Sauer’s MPX and MCX Series
With the new MCX (shown with a Trijicon SRS and a SureFire flashlight), users can quickly change their barrels, calibers, forends and stocks with ease. 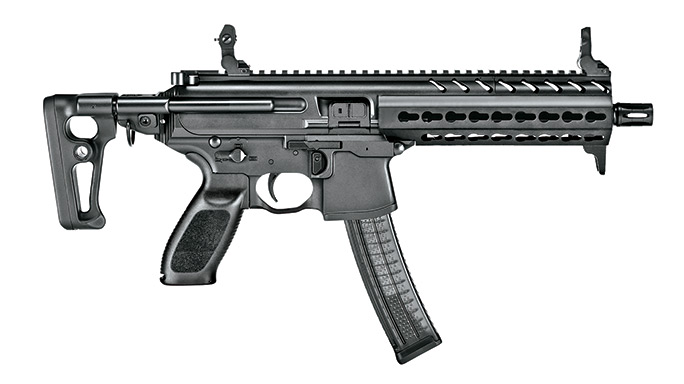 4 of 5
Multi-Cal Machine’s: Sig Sauer’s MPX and MCX Series
The MPX can utilize handguards made of carbon fiber or aluminum (shown) with KeyMod slots for attaching mission-critical acessories like lights, foregrips and lasers. 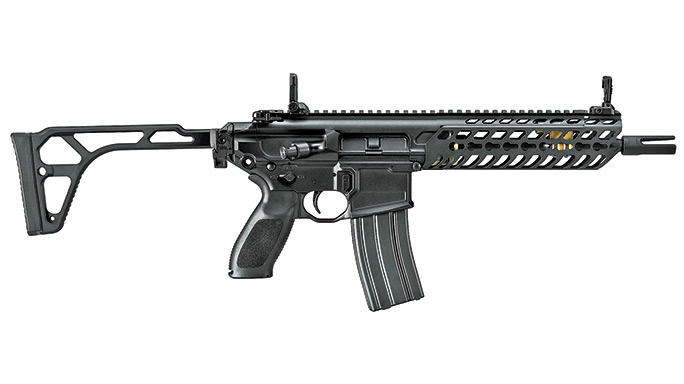 5 of 5
Multi-Cal Machine’s: Sig Sauer’s MPX and MCX Series
The MCX is available in semi-auto or select-fire, and operators can quickly switch between 9- or 16-inch-long 300 AAC Blackout, 5.56mm NATO or 7.62x39mm barrels. 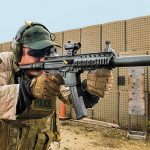 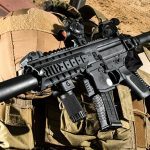 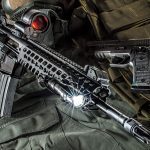 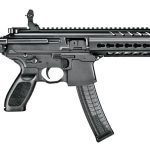 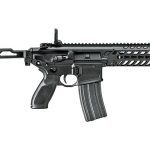 Sig Sauer is one of those companies that graces almost every military gun locker. Most think of Sig in relation to pistols, due in large part to the Navy SEALs’ favorite sidearm—the Sig Sauer P226 Navy. Sig Sauer makes some of the finest pistols in the world, but that tends to overshadow its history.

The company traces its origins to a Swiss factory that built wagons. In its infancy, the company answered a call from the Swiss Army to build a new rifle. The Swiss Wagon Factory soon developed the Prelaz-Burnand rifle that the Swiss Army adopted. This was the first weapon the company had ever created, setting it on a new course. The Swiss Wagon Factory then decided to change the name of the company to Schweizerische Industrie-Gesellschaft (Swiss Industrial Company), or SIG. The company has grown by leaps and bounds in the decades since, establishing a base on this side of the Atlantic, and its reputation for quality in military small arms has caught the attention of operators around the world. And, while the AR-pattern rifle is the standard for the U.S. military today, Sig’s innovative products have caught the eye of many of those in the know.

It was 1948, World War II was a fresh memory and the Soviet threat was building. The U.S. Army, thinking about the next war, wanted to understand the damage inflicted to soldiers and if body armor could prevent more battlefield injuries. After reviewing over 3 million battlefield reports from WWI and WWII, a theme emerged: Most combat takes place at short range.

The study also found that most combat occurs by surprise and the team with the most firepower tends to win. Being shot in combat was also found to be essentially random and aiming made little difference because the targets moved. In Small Arms of the World, Edward Ezell writes, “The number one predictor of casualties was the total number of rounds fired.” Other behavioral studies also revealed that many U.S. infantrymen—as many as two-thirds—never actually fired their rifles in combat. Yet soldiers armed with rapid-fire weapons were much more likely to shoot.

These conclusions suggested that infantry would be better equipped with a fully automatic rifle that increased the actual firepower of regular soldiers. The problem was that such weapons dramatically increased ammunition use, and in order for a rifleman to be able to carry enough ammunition, he would have to carry something else that was a lot lighter—like the rifle itself.

Since it first entered service in Vietnam, the M16 and its variants have met the needs of military and law enforcement entities around much of the world. The platform is so adaptable that an M16 from 1960 basically functions the same way as today’s M4 Carbines.

Every U.S. military unit, including elite Navy SEALs, Delta Force and Air Force PJs, have M4 weapon systems as part of their arsenals. Many of those weapons come from various gun manufacturers that make weapons for U.S. Special Operations Command (USSOCOM) so that its elite operators can have the right tools for the job. In fact, USSOCOM is often the testing grounds for any new weapon system. The main reason is because USSOCOM has a blanket purchasing authority. In other words, if USSOCOM wants a weapon and thinks it’s the best tool for the mission, USSOCOM can procure it. Even within the U.S. government, USSOCOM is unique in that it can “sole source” almost anything it needs without giving a concrete reason why.

This has led to USSOCOM acquiring and using a myriad of weapon systems. While the regular U.S. military uses one basic M4 platform, USSOCOM often gravitates to the most cutting-edge weapon systems it can find.

Lately Sig Sauer has been revolutionizing its weapons lineup, and it has taken the submachine gun and carbine to the next level with its MPX and MCX, respectively. It’s enough to develop a new weapon system, but in this day and age, it’s a giant leap to develop a weapon system that is fully adaptable and versatile. These two new weapon systems might just attract the attention of many, including
USSOCOM operators.

The MPX is billed as a “next-generation submachine gun,” and it is the world’s first mainstream submachine gun that operates with a fully closed and locked rotating bolt system to greatly enhance operator safety. The MPX also employs Sig Sauer’s battle-proven short-stroke gas piston operating system for unequalled reliability in the field, even under the most adverse conditions.

This submachine gun allows an operator to change the barrel length, caliber and stock configuration in the field to meet mission requirements. You can switch from 9mm to .357 SIG or .40 S&W, giving an operator a wide range of ammunition choices to conform to worldwide mission parameters.

Sig has also been involved with 5.56mm-platform weapons for decades, and in 2006 it entered the market with the SIG556, which was designed after the SIG550 but used a standard AR-15 magazine in place of the SIG550’s proprietary magazine.

Now Sig has created its “first true mission-adaptable weapons system.” The MCX was designed from the ground up to be short, light and suppressed. For the MCX system, Sig developed an innovative, auto-regulating, short-stroke gas piston operating system. An operator is able to easily change the barrels, calibers, stocks and handguards in the field. This is a weapon designed with multi-mission versatility in mind.

The MCX is currently available as an SBR with a 9-inch barrel, a carbine with a 16-inch barrel or a pistol with a 9-inch barrel. The MCX can also fire the 300 Blackout, 5.56mm NATO or 7.62x39mm with a simple barrel swap. With this setup, troops would no longer be limited by their own ammunition supply and could use the ammo commonly found in other parts of the world. The MCX also weighs between 5.75 and 6 pounds depending on its configuration, making it much lighter than standard-issue M4s currently in servce in the U.S. military.

To complement these groundbreaking designs, Sig has also developed sound suppressors and ammunition that matches the weapons’ advanced engineering. The MPX, MCX and Sig’s line of Silencers have been taking the military and law enforcement ranks by storm and are rumored to be under heavy consideration by USSOCOM as well as other Tier One units around the world. If USSOCOM does choose the MPX or MCX as its next-generation weapons systems, Sig Sauer will remain a top choice for the elite warriors of the world. 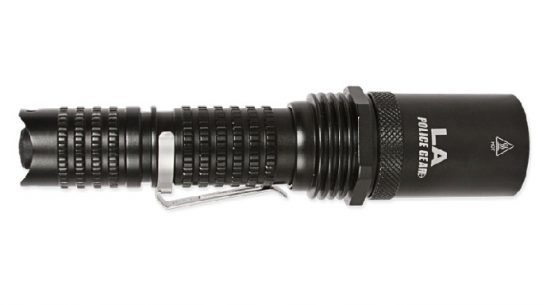