1
SHARES
99
VIEWS
Share on FacebookShare on Twitter
The 9mm SIG P210 has served with Swiss armed forces for decades. Its long barrel, precision manufacturing, and excellent trigger contribute to its renowned accuracy.

Similar to the reputation of Swiss-made watches and other precision machinery, Swiss-made firearms have always been held in high esteem for their first-rate quality and exceptional craftsmanship. From 1900 to just short of the half-century mark, the Swiss-made Luger was the standard pistol in the Swiss armed forces. Though considered one of the finest Lugers ever made, it was replaced by an even finer pistol, the SIG P210, designated the P49 in Swiss military service. Unlike the Swiss Luger, which was chambered for the 7.65 Luger cartridge, the P49 was chambered for the 9mm Parabellum round.

History
The design of the P210 was actually licensed from Charles Petter, designer of the French M1935 pistol, in 1937 and though slowed by World War II, was developed over the next decade by Schweizerische Industrie-Gesellschaft (Sig). Two noteworthy features of the design are rails on the inside of the frame and outside of the slide, the opposite of the standard system. This allows quite a tight fit and enhances accuracy. This rail system was retained from the Swiss Lugers. For ease of maintenance, the hammer group is a lift-out assembly. It features a locked-breech action using a variation of the Colt/Browning system, but eliminating the swinging link. A spring-loaded extractor aided precision as well. By aligning the bore axis of the barrel very consistently with the frame, accuracy was improved. The frame and slide were machined from blocks of steel and barrels were precision-rifled.

The resulting 47/8 variant would be adopted as the P49 and marketed commercially as the P210. Versions of the pistol using a double-column magazine and holding 15 or 16 rounds had been tested but grip size, weight, and balance made them less desirable. The P49’s design and precision manufacturing, as well as its excellent trigger pull, contributed to its legendary accuracy. Because Swiss soldiers are, for the most part, reservists prepared for immediate call-up who keep weapons at home, great stress is put upon shooting competitions to keep reservists sharp. As a result, the P49/P210 was designed to be a durable service pistol that shoots like a match pistol. The P210 was expected to put five shots into 50mm (about 2 inches) at 50 meters before leaving the factory.

Swiss Army-issued P49s feature an “A” in front of the serial number, and many came with brown, European-style flap holsters. This version is also known as the P210-2.

More than six decades after entering Swiss service, the P49/P210 is still durable and shoots like a match pistol. In an age of polymer frames, double actions, large magazine capacity, and ergonomic backstraps, for many, the P210/P49 remains the best automatic pistol ever made. That said, it only holds eight rounds, is single-action only, has less than adequate sights, a European-type bottom magazine release, and it’s relatively heavy due to its all-steel construction. It has foibles, too. Traditionally, a new P49 or P210 safety is so stiff that hours of working it on and off were required to score a path on the frame and break it in. Note that this safety blocks the trigger when applied. Care must also be taken if one has not shot a P210/P49 for a while so as not to jerk the first round—the trigger pull is that good. The P210 trigger still employs a two-stage pull but with a very crisp release.

Because of its design, the author is able to produce tight groups with the Sig Sauer P210.

Sig Performance
I first became a fan of the Sig P210 while working on close protection teams. I could shoot my Browning Hi-Power well to 25 yards and maybe even to 50 yards, but I wanted something I could have available to engage accurately at 100 yards. I chose a P210 and after a bit of practice found I could consistently keep up to half my magazine on a silhouette target at 100 yards. I don’t ever remember hitting with all nine rounds (8+1), but I remember six or seven hits quite a few times shooting prone. I felt that I could give a good account against an AK-armed attacker who had probably never even zeroed his rifle.

There are a lot of variations of the P210, but only one is the Swiss Army version—the P49. By the way, the P49 was issued to Swiss officers or others issued a pistol with a brown European-style flap holster with an internal magazine pouch for one extra magazine. This version is also known as the P210-2. True Swiss Army-issue pistols can be recognized by the letter “A” before the serial number. Upon completion of their service, a Swiss soldier could be presented his P49, at which time a letter “P” (for “Privat”) was stamped on the triggerguard.

Some Army pistols, which were surplus, were later sold to Swiss civilians. These have a “P” added after the serial number. Swiss Army issue pistols had a flat bead-blasted-type finish. Early examples had ribbed wooden grips, while later military guns had the black plastic grips of the type on my first commercial SIG P210-6 9mm. 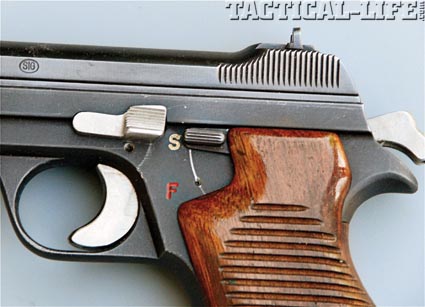 This close-up shows the groove worn into the P49’s frame from flipping the safety on and off thousands of times.

In 1975, the P49 was replaced by the P75, a 9mm version of the Sig P220 with a European bottom magazine release. Reportedly, between 1949 and 1975, 113,110 P49 pistols had been produced. Since some Swiss officers can serve for more than 30 years, some from officer classes during the early 1970s would have continued to use the P49 into the 21st century. Though production of Swiss Army P49s had ceased, the Sig P210 in various versions continued production until December, 2005. Sig Sauer recently unveiled the new Sig Sauer P210 Legend to continue the line, however.

Wrap Up
I’ve been shooting versions of the Sig P210 or P49 now for over 30 years. The P210-6 I’ve had for most of that time has had at least 25,000 to 35,000 rounds through it, but other than the scoring where the safety has worn in, it shows little wear and is still as accurate as any pistol I own. I still rate it the best pistol in the world. 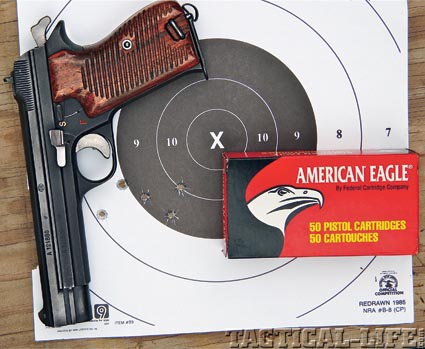 Although the P49 tested for this article is well over a half-century old, as this 25-yard group shows, it still is plenty accurate for a 9mm handgun.