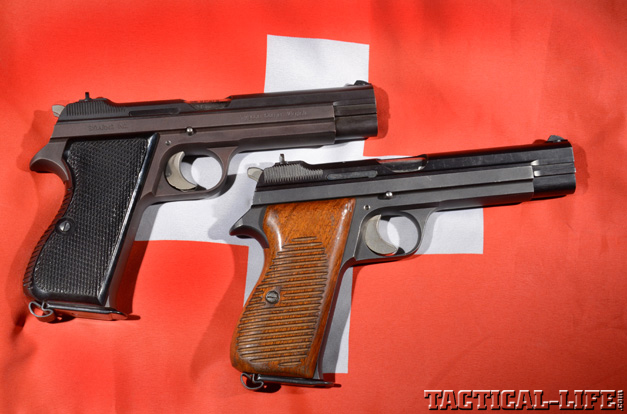 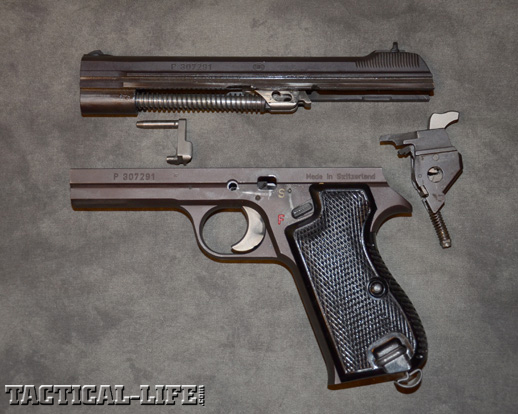 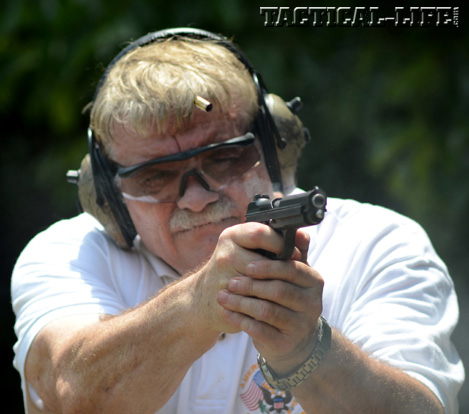 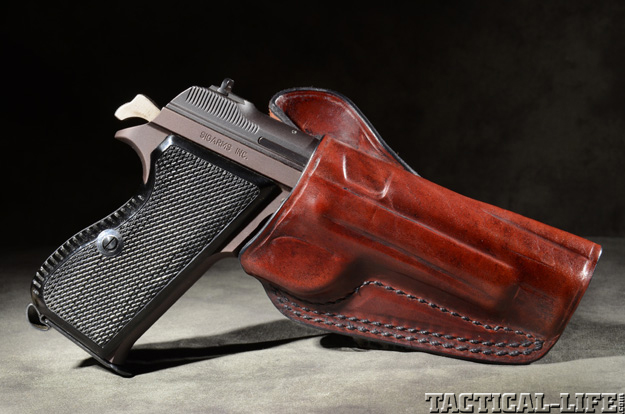 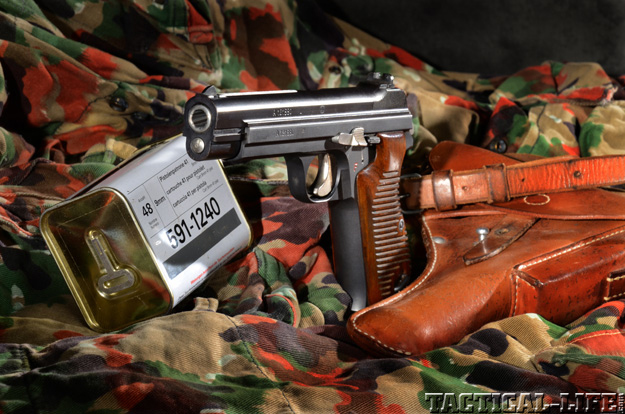 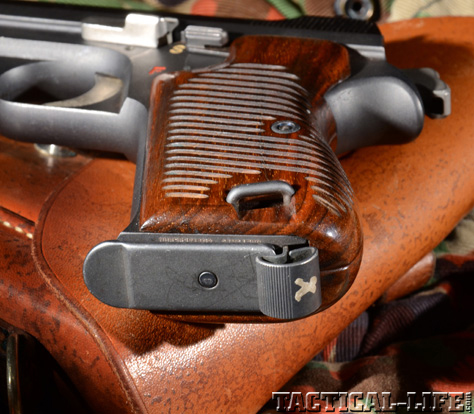 6 of 7
Sig-Sauer-P210-P49-Lanyard
The P49’s bottom magazine release and lanyard ring, the latter of which fits through the handgun’s wood grips. 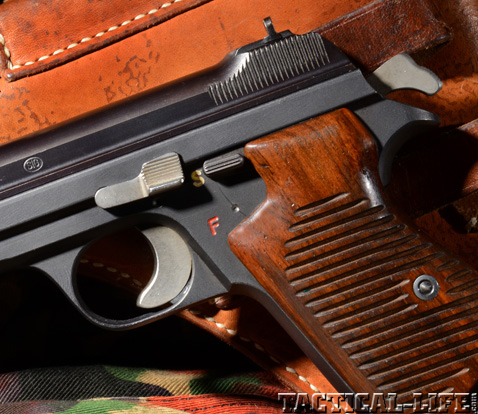 7 of 7
Sig-Sauer-P210-P49-SF
Note the P49’s safety, which normally has to be worked in for ease of operation. Also visible is the side release. 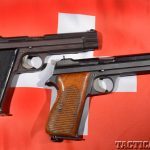 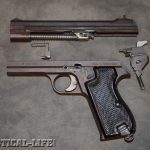 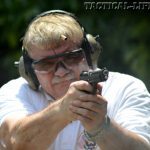 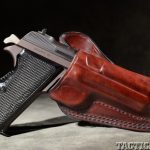 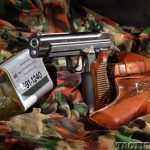 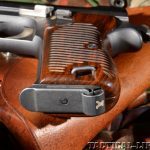 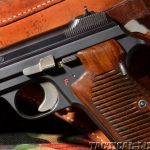 Like most gun-writers, I usually hedge a bit and term a gun “one of the best ever.” But I have trouble hedging when I talk about the Swiss Army’s P49 or its civilian counterpart, the Sig Sauer P210. There are other, very good military pistols such as the Colt M1911, the Browning P35 and the Sig Sauer P226, and these are actually better issue military pistols in some ways. But I still consider the P49 the best pistol of the bunch. I base that statement on two primary factors: accuracy and durability. Of course, a big consideration for most countries would have been the fact that the P49 was also the most expensive military pistol in the world to produce, one that required the skilled craftsmen at Schweizerische Industrie-Gesellschaft (SIG) Neuhausen to do the hand-fitting.

Swiss Design
Virtually any experienced shooter I’ve known who fires a P210 for the first time becomes a convert: They can’t believe the trigger pull and the tight groups. I have actually won a couple of bets that I could shoot a better group at 50 yards with my P210 than my competitors could with their pistols at 25 yards. I lost a couple of bets too.

The P49s and P210s are also incredibly durable. They are tough and will hold up to many, many thousands of rounds of use. I have a P210 that I’ve been shooting for more than 30 years, generally 1,000 to 2,000 rounds per year, and it still looks as good as it did the day I took it out of the box. I do know of one shooter who managed to break a part in his P210 (I can’t remember which one) while shooting hot submachine-gun ammunition. Generally, however, the pistol is designed for long life.

I have a Swiss friend who was in one of the early officer’s classes, when the Swiss Army switched from the P49 to the Swiss Army P75 (9mm Sig Sauer P220). However, he had inherited his grandfather’s Swiss Army Luger and would inherit his father’s P49, which he had shot many times over the years and planned to shoot in the future and then pass on to his son—he was content. I’m sure there are quite a few Swiss today still shooting their grandfather’s P49s.

Military Version
As the P49 designation indicates, this military version of the P210 was adopted in 1949 to replace the Luger pistol then in use with the Swiss Army. The P49 was itself replaced in 1975, though many P49s remained in service with Swiss reservists until the last decade. Once a member of the Swiss Armed Forces had completed basic training, he kept his issue weapon (a P49 or Sturmgewehr 57, replaced by the P75 or Sturmgewehr 90) at home, along with other equipment and a war-issue tin of ammunition to be opened in case of mobilization. Only recently have most reservists had to turn in those supplies of ready ammunition.

The P49 owes some aspects of its design to the French M1935 pistol. Among its distinctive features is a modular hammer group that can be lifted out for maintenance, much like that of the Tokarev TT33. Also distinctive is the P49’s rail system in that the slide rides inside the rails (rather than outside, as on most automatic pistols), a feature taken from the Swiss Luger pistol the P49 replaced. This full-length rail system allows a tight fit between frame, slide and barrel and enhances accuracy. The P49/P210 rails are well polished, and despite the tight fit, the pistol is extremely reliable. The slide and frame were each machined from blocks of steel, much more expensive than using stampings and welding, but very durable.

Accuracy Obsession
Accuracy has always been deemed of utmost importance for Swiss military pistols. As a result, when the Swiss tested two prototypes for the P49—one with a single-stack magazine and one with a double-stack—they chose the single-stack because they found the slimmer grip gave most shooters better accuracy. This P49, initially designated the SP47/8, used a variation of the Browning locked-breech, tilting-barrel design of the Colt 1911 and the Browning P35. Like the P35, the P49 did not use a swinging link. Another feature that enhanced reliability was a spring-loaded extractor (also similar to that of the Tokarev).

To allow Swiss troops to shoot their weapon competently, a number of competitions have been traditionally scheduled throughout the year in Switzerland. The P49 was intended to allow extreme accuracy at 50 meters, both for competition and for shooting any enemy attempting to invade Switzerland. As a result, P49/P210 pistols had to be able to group 10 shots into 5 centimeters, or just under 2 inches, at 50 meters. The P49/P210 trigger pull was also a great aid to accuracy. The P49/P210 uses a two-stage trigger pull, which entails a relatively long take-up followed by a very crisp release. With use, one does not really notice the take-up. The trigger pull is so good that, several times when I had been away from my P210 for a couple of months, I pulled off my first shot because the release took me by surprise. That’s one reason I shoot my P210 once or twice a month, even when I’m not carrying it.

Serial Code
Swiss Army P49s can be easily spotted because their serial numbers begin with the letter “A,” while civilian guns have serial numbers that begin with the letter “P.” Reportedly, a total of 113,111 military P49s were produced. Normally, P49s that were sold to the soldier to whom they had been issued or other Swiss civilians had a “P” stamped after the serial number or on the receiver, to designate private ownership. All military P49 pistols were in 9x19mm caliber and used the Swiss PPS-41 (Pistolen Patrone-41), 124-grain FMJ cartridge, which was packed in 24-round boxes. Magazine capacity was 8 rounds. Normally, the P49 was issued with a leather holster that took the pistol and one spare magazine.

Commercial versions of the P210 or earlier SP47/8s were produced in 9x19mm and 7.65x21mm (.30 Luger) caliber. Since many Swiss Lugers in .30 Luger caliber were still in use during the first decades of the P210’s service, some Swiss shooters preferred that caliber. I have also seen P210s that came with both .30 and 9mm barrels. Over the years, the P210 has been produced in numerous variations. The P210-1, P210-2 and P210-3 primarily showed variations in finish. Note that the P210-2 was basically the Swiss Army version with black plastic grips. There was also the P210-4, which had a bead-blasted finish and is best known as the model sold to the West German border police. The P210-5 had adjustable sights, a target trigger and a longer barrel that protruded from the slide. Another target version was the P210-6, which had a standard-length barrel, fixed or target sights and, usually, a heavier frame. The P210-7 was a blowback .22 LR version used for training. This pistol is rarely encountered, as the .22 LR conversion unit was more commonly used on a standard 9x19mm P210. In 2001, the P210-8 was introduced for the U.S. market with a button magazine release on the frame.

Denmark and Latvia also purchased versions of the P210 for police and military use. Most of the Danish guns and many of the West German guns have been imported into the U.S. and sold on the collector and shooter markets.

In The U.S.
I first got interested in the P210 working close-protection in the ‘70s and ‘80s, as I needed a pistol for longer-range engagement than with my P35. I acquired a P210 and practiced shooting it at 50, 75 and 100 meters—I actually got pretty good. Offhand on humanoid targets at 50 meters, I could put 9 rounds in the torso. On really good days, I could usually group in 6 to 8 inches. For 75 or 100 meters, I usually tried to fire from the prone position. At 100 meters, I considered myself doing okay when I kept half or more of the magazine on target. I don’t remember ever hitting with 9 shots, though I do remember once with 6 shots in center of mass. Andy Arratoonian of Horseshoe Leather Products in England made me a shoulder rig, and I carried the P210 as my second gun.

I still carry my P210 sometimes loaded with CorBon 125-grain JHP and in a K. L. Null holster. A comment on the durability of the P210 finish is that, throughout many St. Louis summers, I’ve carried mine in the K. L. Null holster, the shoulder rig or an inside-the-waistband holster, under a shirt with the IWB holsters. Often, the gun would be beaded with perspiration, but I just wiped it off with a slightly oily cloth at night and have never noticed a blemish. These days, I don’t carry the P210 as my everyday pistol, but I do carry it fairly often. It’s heavy and single-action-only and has a bottom mag release, sights that are at best adequate and a single-stack magazine—it’s pretty retro, but I still love it.

Just to comment on two aspects of the P210: the bottom magazine release takes some getting used to, but with practice you learn to have a spare magazine in your support hand between fingers and to push the magazine release and strip the empty magazine out prior to pushing the spare in—besides, the P210 is so accurate against one or two attackers, you ought to be able to place your first shots; the other point is that the P210 safety takes some effort to work, but I like it because I have never had the safety work off when carrying the P210 cocked and locked, even with it brushing against my side all day long. I’ve always followed the ritual of sitting with a new P210 while watching something on television and operating the safety a few hundred times to work it in. You can tell with a P210 when the safety is worked in because the finish gets scored in an arc.

A number of P49 military pistols have been imported into the U.S. They aren’t cheap, but they offer a great pistol with a lot of history, especially for those of us who admire the Swiss shooting traditions. The original P210 is no longer made, so if you want one of those you will have to look on the used-gun market. They aren’t cheap either, but they are a better investment than most things these days. Even though I expect my P210 to outlast me, I bought a P49 awhile back: It’s an investment I can shoot and admire! 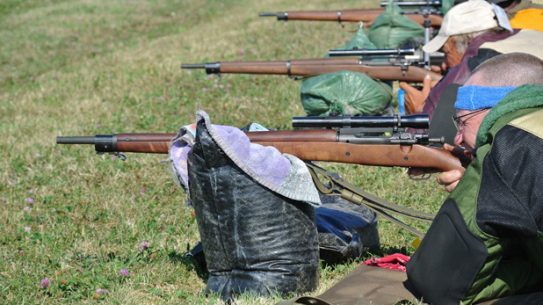