0
SHARES
13
VIEWS
Share on FacebookShare on Twitter
For more than 20 years, the SIG SAUER® P226® has been the sidearm of choice for the world’s elite military forces, including the United States Navy. The battle-proven P226® pistol platform has proven itself to be an uncompromising, combat-ready pistol, clearly demonstrating that when it counts, SIG SAUER® is there.

And, for the first time, the United States Navy has granted SIG SAUER® permission to sell the new contract pistol, designated the MK25, to the general public.

The commercially available MK25 is identical to the firearm SIG SAUER® delivers under contract to the Naval Surface Warfare Center (NSWC). Built to the Navy’s demanding standards, the MK25 comes chambered in 9mm, with a phosphate finish applied to all internal components, providing corrosion resistance in even the harshest of saltwater environments. 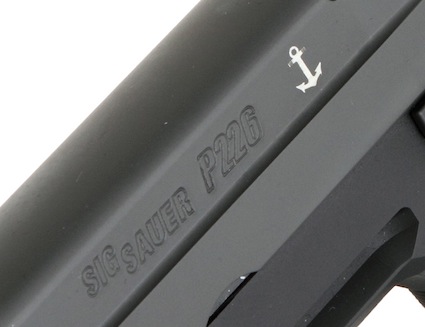 The engraved gold anchor on the pistol’s slide hints at its military origin, while the UID code on the right side serves as a genuine badge of authenticity. The true mil-spec 1913 rail is machined into the hardcoat anodized alloy frame, providing a solid mounting point for lights, lasers and accessories. 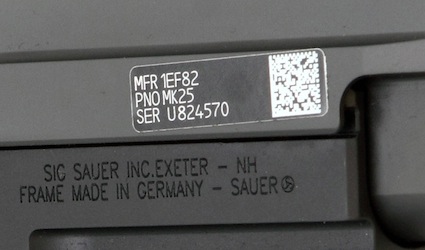 A reliable double-action/single-action trigger and two-piece polymer grips are included in the NSWC-specification package. SIGLITE® night sights, three magazines, and a card certifying authenticity come standard in the case.

The only other way to obtain an authentic MK25 pistol would require a Naval enlistment and training with elite forces.

Own a piece of American military history with the purchase of a SIG SAUER® MK25 pistol. Sigsauer.com.