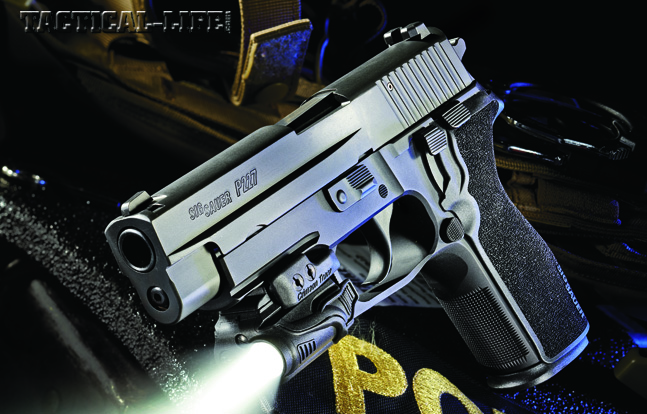 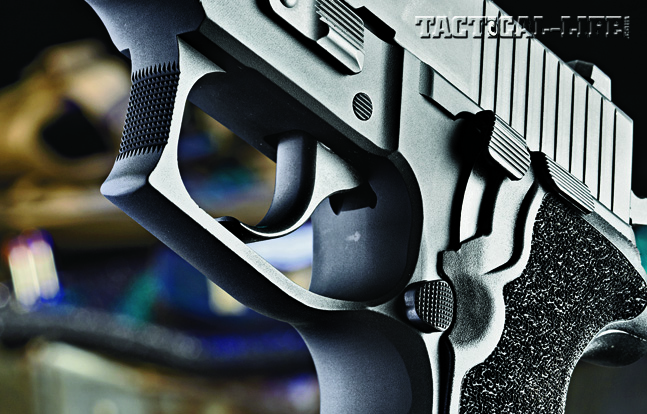 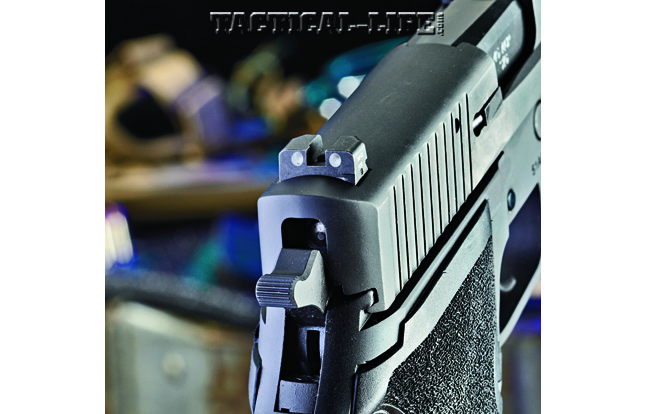 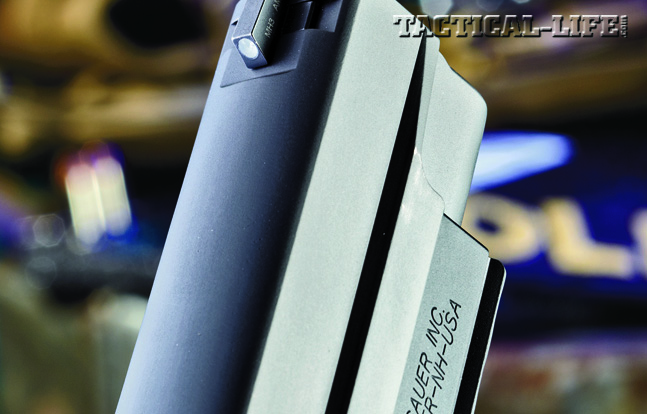 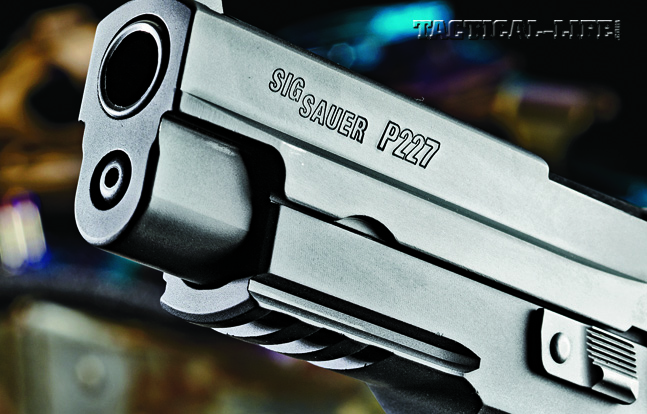 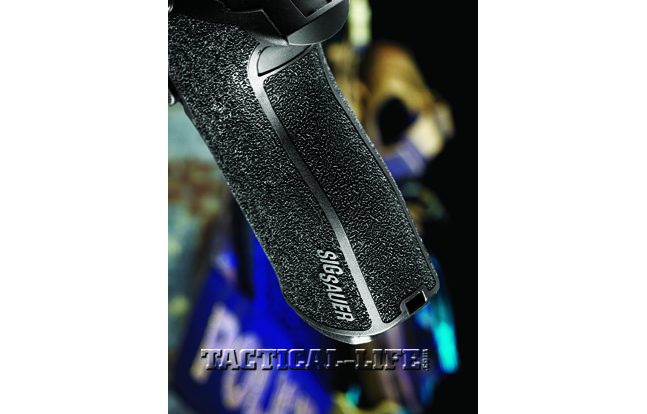 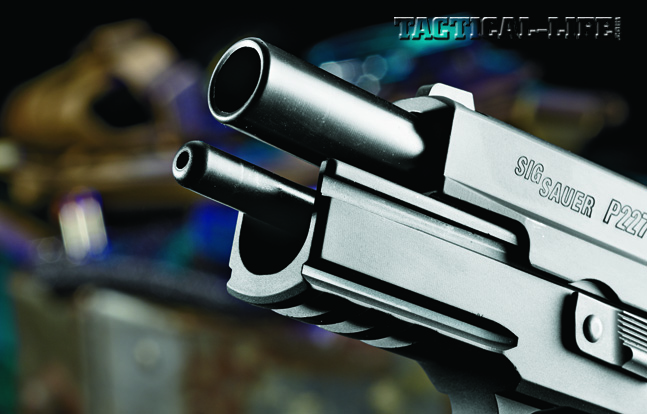 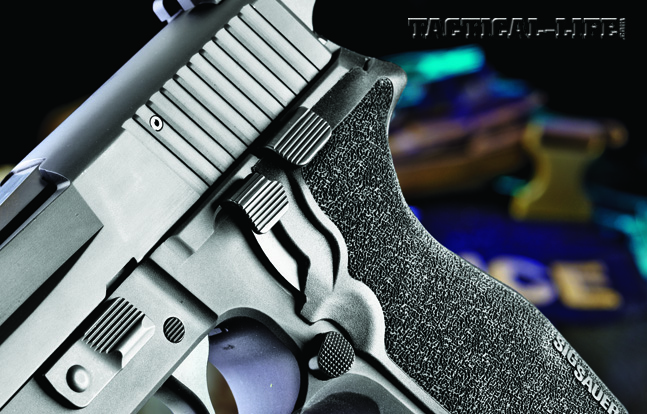 8 of 10
Sig Sauer P227 .45 ACP Pistol | Gun Review 8
The takedown lever, decocking lever, slide release and mag catch are all mounted on the left side of the hardcoat anodized frame. 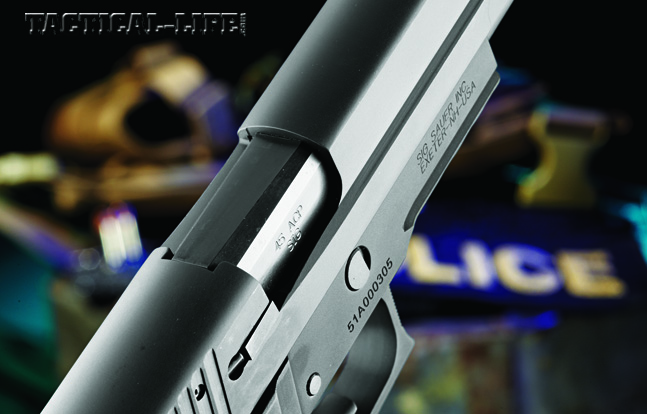 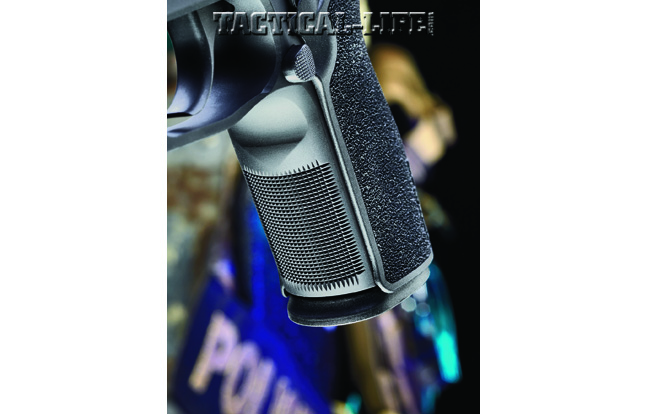 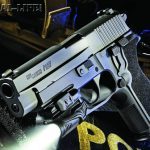 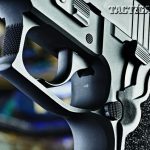 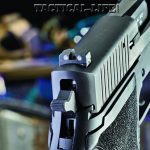 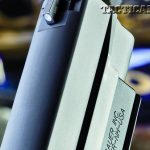 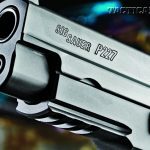 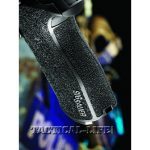 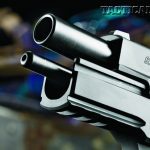 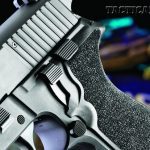 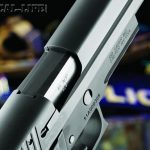 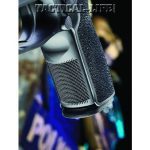 When it comes to handguns designed for LEOs, few can hold a candle to Sig Sauer. With its extensive line of offerings and long relationship with the law enforcement community, this is a company that knows how to provide what officers need. To that end, mid-January 2013 saw the introduction of the P227 by Sig Sauer, and new handguns are now rolling off the production line. The P227 is chambered for the venerable .45 ACP cartridge and has a capacity of 10 rounds in its staggered, flush-fit magazine, plus one in the chamber. There is also an extended magazine available that increases the cartridge count to 14+1.

The frame of the P227 is based on that of the well-known P226, and it comes in three different versions. The P227 Nitron has a 4.4-inch barrel, and its size identifies it as a duty handgun. The P227 Carry has a more compact 3.9-inch barrel for easier concealment, and finally there’s the P227 Carry SAS 2B, which has the same 3.9-inch barrel, but has been given Sig’s Anti-Snag Treatment, making it even better for plainclothes, off-duty or self-defense, plus it has the Sig Short Reset Trigger. All three models have a stainless steel slide with Sig Sauer’s exclusive Nitron finish and a black, hard anodized alloy frame, along with a textured polymer, one-piece, ergonomic grip. The pistols also have the traditional double-action/single-action (DA/SA) mechanism, which includes a decocking lever.

I was recently able to test and evaluate the full-sized P227 Nitron. The pistol arrived inside a lockable, plastic carrying case that had a foam rubber liner in the bottom half with cutouts for the pistol and an extra 10-round magazine (included). The owner’s manual, warranty and product registration form were also included. Beneath the foam rubber liner were a safety padlock and a small container of Sig Sauer Mil-Comm TW-25B lubricant/protectant.

A cursory inspection of the exterior of the pistol revealed the usual excellence of workmanship for which Sig Sauer is known. There were no tool marks or blemishes on any metal surfaces. The Nitron finish on the slide and the anodizing on the receiver were well done, leaving the entire handgun in a non-reflective, dark charcoal gray color. The black, one-piece grips are well proportioned, with stippled panels on the sides and backstrap area. At the butt of the grip frame, they form a beveled magazine well. The exposed grip frame of the frontstrap is both finely checkered and has a dished-out area just below the triggerguard.

The P227 has the traditional Sig P226 control configuration, with the takedown latch on the frame, just above the trigger. Moving toward the rear, you’ll next find the decocking lever and immediately behind it, the slide release lever. An inch below the decocker is the magazine catch. There is no external manual safety, but the P227 does feature Sig Sauer’s Four-Point safety system, which incorporates the decocking lever, the patented automatic firing-pin safety block, a safety intercept notch and a trigger bar disconnector. On the P227 Nitron, the DA trigger pull is long and about 10-plus pounds, but smooth. The SA pull has the requisite amount of take-up and a bit of creep before breaking at 4 to 5 pounds. Helping out the pull weight is a wide, smooth-faced trigger. The triggerguard is generously sized and flat in the front with a small, checkered panel. The external hammer is smallish, with a stubby spur that is serrated for easier manual cocking. Ahead of the triggerguard on the receiver’s dust cover is a Sig accessory rail for mounting tactical lights, laser sights or combination units.

The slide on the P227 is machined from stainless steel bar stock and then coated with the wear-resistant Nitron. Ten rear slide serrations provide a good gripping surface, and the well-proportioned ejection port forms a locking surface for the pistol’s Browning-type locked-breech mechanism. The extractor is rugged and powered by a coil spring, and the 4.4-inch barrel has conventional rifling. My test gun was fitted with SIGLITE night sights that are mounted in dovetails, allowing for windage adjustments. Fixed contrasting sights come standard. Interestingly, the P227 will accept any slide assembly from the P220, so the P227 Nitron can easily be converted to a Carry, SAS, Stainless or Super Match just by swapping uppers. Plus, with the P226-sized frame, you get a big-bore caliber without a fat grip, and the P227 will fit in any holster that takes a rail-equipped P220 or P226 pistol.

As a long-time firearms instructor with my federal LE agency, I felt that I was sufficiently qualified to evaluate the Sig Sauer P227 for use as a uniform or even plainclothes duty pistol. I rummaged around in my plastic tubs of leather gear and came up with a duty belt rig that would accommodate the P227 and extra magazines. It included a gun belt, a double magazine pouch, a handcuff case and a Level 3 SERPA auto-locking duty holster—all from BlackHawk. In Level 2 and Level 3 configurations, the holster retains the handgun securely, yet the handgun can be swiftly put into action with a natural and uncomplicated progression. I fashioned a rig much like the outfit I use in uniform on duty, so I was more than comfortable with the arrangement of the gear and its placement on the belt.

I used three different .45 ACP loads from Black Hills, Federal and Speer to wring out the P227 Nitron at the range. The Black Hills test ammo was some vintage “Blue Box” remanufactured loads carrying a 185-grain JHP bullet. I wanted at least one kind of test cartridge with a lighter-weight bullet, but my other two selections both had traditional 230-grain bullets. The first was Federal Tactical Law Enforcement ammunition that features the Hydra-Shok JHP bullet with the unique post in the bullet nose to ensure expansion. The Speer ammo was also an LE duty load with the Gold Dot hollow-point bullet. It’s unique in that the jacket is “plated” onto the lead core, and a punch creates the hollow nose cavity, which leaves a small disk of jacket material down inside the bullet, giving it the Gold Dot moniker. With the P227, gun belt rig and ammunition in hand, it was time to see what the latest Sig Sauer offering could do.

“I make it a point to assess my immediate vicinity for other “hostiles” before reholstering, then working the weapon back into the holster slowly, making certain to “check my six,” too…”

My range day was overly warm and very humid. I set up my Oehler Model 35P chronograph to measure some velocity readings on the test ammo when fired through the P227. That accomplished, I put up three bullseye targets at the 25-yard line and, using a sandbag rest on the range bench, I proceeded to fire five-shot groups with each brand of ammo. The SIGLITE sights, with their three-dot arrangement, were easy to see and line up on target. I did all my shooting in SA mode to evaluate the pistol’s accuracy potential, and when I did my part, the P227 performed in the manner that a service-grade autoloader should. The tightest five-shot cluster I was able to produce that day, made with the Federal Tactical cartridges, measured 2.28 inches. Groups with all of the ammunition averaged between 2.5 and 3.5 inches. I found that my point of aim needed to be at the top of the black bullseye with the 185-grain JHP ammo and dead-on the orange target center with 230-grain loads.

While test protocol requires group-shooting “paperwork,” I do my best during the combat shooting phase of the evaluation. I set up some old-fashioned K-zone humanoid silhouette targets and ran the Sig P227 through a 30-round practical pistol course. My magazines were loaded with a mix of the .45 ACP test cartridges, and I inserted one in the P227, did a “lock and load” and then reholstered it. Two others were put in my magazine pouch and snapped in. I engaged the target at 3 yards, firing six rounds strong-hand only and then six support-hand only, with a necessary magazine change. I used a point-shoulder stance, with the uninvolved arm bent across my chest for additional protection. When running qualifications, I make it a point to assess my immediate vicinity for other “hostiles” before reholstering, then working the weapon back into the holster slowly, making certain to “check my six,” too.

Moving back to 7 yards, I drew the pistol and fired two rounds center-mass with a three-second time limit. I kept the weapon at high-ready for the next series of double-taps (with a two-second limit for each) for a total of six shots. Still at 7 yards, I performed a triple-tap drill much the same as the previous exercise, exchanging the magazine as needed. If you want, the third shot can be aimed at the head or pelvis to make this a body armor drill. The final portion of the course is at 15 yards and requires shooting from the barricade position, with two shots support-side standing, two shots strong-side standing and then two shots strong-side kneeling in 20 seconds. (Most of the “troops” take only 10 to 12 seconds for this portion.) The best tactic on the barricade is to use it only as cover and not as a rest, but after years of PPC competition, I find myself doing just that. I went forward and found my shots all were center-mass. On a regulation target, I would’ve scored a “possible.” During this phase of the evaluation, both the weapon and the leather gear worked flawlessly.

I can tell you as a gun writer, LEO and firearms instructor, it is always a relief to test a firearm that works 100 percent of the time, shoots to the sights and has outstanding ergonomic features. No, the P227 does not have an interchangeable backstrap like so many new pistol designs, but even in my medium-sized hand, few handguns have the comfortable feel and fit of the P226 platform. The bore axis is relatively low for this kind of pistol and, coupled with the grip design—including the stippled and checkered surfaces—you have a handgun not prone to slippage even in humid or wet weather conditions and one that is effectively controlled in rapid-fire scenarios. In short, the Sig Sauer P227 “will do to ride the river with.” 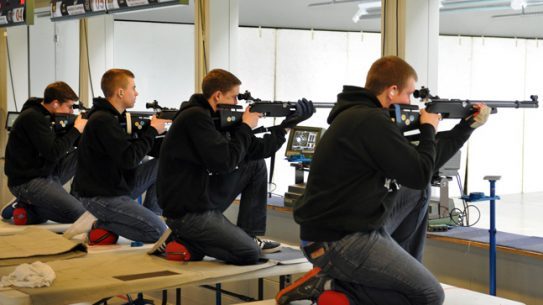 Fort Benning and the ranges of the U.S. Army Marksmanship Unit will be at...