by Doug Larson
in Uncategorized
0

0
SHARES
54
VIEWS
Share on FacebookShare on Twitter
Manufactured in Germany by J.P. Sauer & Sohn — the “Sauer” in Sig Sauer — this turn bolt action, mag-fed rifle was first introduced in 2000 and designed specifically for the law enforcement marksman.

Sometimes when things turn really ugly, a trained police professional is forced to judiciously administer 168-grains of lead and copper to stop a violent criminal, and to do so, a quality bullet launcher is needed. One such launcher is the Sig Sauer SSG 3000, a rifle that was designed for use by law enforcement and military snipers.

The gun is manufactured in Germany by J.P. Sauer & Sohn. Although Sig Sauer has a large manufacturing facility in the U.S., some of its products are still made in Europe for sale in America, as is the case with the SSG 3000.

This turn bolt action, magazine-fed rifle was first introduced in 2000, and has found a home with a number of law enforcement agencies and many foreign military units in the marksman role. It is available in only 7.62x51mm NATO cartridge, which is the civilian nomenclature for the .308. 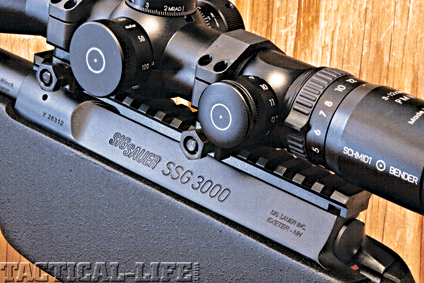 The receiver is manufactured from a solid bar of Krupp steel and is topped with a Mil-Std-1913 rail.

With 1-in-12-inch twist/four-groove rifling, the cold hammer-forged Krupp steel barrel is free-floated in a McMillan composite stock. The catalog lists the barrel as 23.5 inches long, but it measures 25.5 inches from the receiver to the end of the slotted flash suppressor, which also acts as a muzzle brake. The five suppressor slots are arranged to reduce the amount of dust that might be launched
into the air by muzzle blast, something that could reveal a marksman’s position or obscure his vision.

The black oxide-finished barrel is tapered from about an inch diameter at the receiver to about 0.75 of an inch at the muzzle and is marked on the left side just in front of the receiver with “Cal. .308 Winch” and “Made In Germany.” Barrel change by the operator is made possible by loosening three screws that hold the barrel in place.

Although the gun has no iron sights, it is equipped with a 7.5-inch long Mil-Std-1913 Picatinny rail that is attached to the top of the receiver by four screws and designed for mounting an optic. No elevation is built into the rail, something that is sometimes seen on rifles built for extremely long range work, but with a scope that has enough internal elevation adjustment, this should not be a problem.
On the left side of the receiver appears the words “SIG SAUER SSG 3000” and “Sig Sauer Inc. Exeter-NH.” Manufactured from a solid bar of Krupp carbon steel and finished in black oxide, the receiver has two small vent holes near the front to channel gas away from the operator in case a cartridge case were to rupture.