0
SHARES
8
VIEWS
Share on FacebookShare on Twitter
Precise and reliable, the Sig Sauer SIG551-A1 brings 551 appeal back to the U.S. This gas-piston carbine’s diopter sights pair nicely with a Vortex 1-4×24 scope and its safety/selector is ambidextrous. The SIG551-A1 SBR is similar to the renowned SIG552. The Classic SBR version retains the comfortable handguard.Sean Utley Photo

American shooters were de­­­prived of some great rifles by the 1989 assault rifle import ban. For me, the one that hurt the most was the SIG551. The true SIG551 is a select-fire carbine with a 14.3-inch barrel banned from import (except for LE sales) even prior to 1989. I had fired the original Swiss military SIG551 in Switzerland and considered it the best assault rifle I’d used. I haven’t changed that opinion, though I understand there are certain situations where a 7.62mm NATO rifle is desirable. 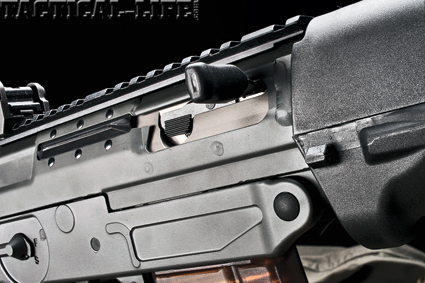 Sig’s attention to detail extends to the SIG551-A1 cocking handle, which offers good leverage should a case get stuck and allows operation with either hand. Sean Utley Photos

More recently, Sig Sauer announced the introduction of the SIG551-A1 for the U.S. market. At an MSRP of $1,986, I felt the SIG551-A1 offered other shooters a chance to own a shooting SIG551—not a collectible. I immediately requested one for testing and evaluation. But, before discussing how it performed in my tests, let me explain why the SIG551 and SIG551-A1 are such good rifles.

Gas Piston Sigs
I’ve never really gotten wrapped up in gas-piston operation versus direct impingement operation as related to AR-15s/M4s. However, the SIG550 series of rifles are gas-piston-operated with a rotating bolt. With my SIG550, which I have been shooting for many years, this system has proven reliable and clean operating. In fact, I have fired thousands of rounds at times without cleaning my SIG550, yet it has continued running. It’s clean now and stuck well back in the safe. The SIG551-A1 has a two-position gas regulator. The second setting, allowing more gas, may be used when the carbine is heavily fouled or in icy conditions. My Swiss contacts have normally talked about using it in the latter situation.

One of the reasons I think so highly of the SIG551-A1 is its folding stock, which is actually more comfortable when deployed than most fixed stocks. I also like the SIG551-A1’s paddle magazine release, which is faster to operate and sturdier than the cross-button type used on the SIG556 or the AR-15. Some will dislike that fact that the SIG551-A1 magazines cost more than M16 magazines, which may be used in the SIG556. Yes, they cost more, but I am willing to pay for them. They are extremely reliable magazines that may be coupled by a stud and slot system. They are also translucent, which allows a quick check of rounds remaining. A note on coupling the magazines: I have seen three coupled, but I normally prefer to couple two if I want a fast reload. Different instructors teach placing the extra loaded magazine on the left or right side of the receiver. I prefer the right side so the magazine does not catch on any webbed gear. Twenty- and 30-round magazines are available. I like 20-round ones in the carbine to allow me to go prone more readily, but I use 30-rounders as well.

I also like the SIG551-A1’s ambidextrous lever safety, which I have found one of the easiest to operate of any I’ve used. Also, the SIG551-A1’s pistol grip comfortably fills the hand well. Although I don’t normally fire assault rifles one-handed, I do frequently carry the rifle in one hand if I’m doing something with the other hand, and this pistol grip allows easy control of the rifle if held in one hand. Speaking of carrying, the SIG551-A1 has sling attachment points for a Swiss-type sling or can use a single-point or other types of CQC sling.

The SIG551-A1’s barrel uses four-groove rifling with a 1-in-7-inch twist, which means it will handle SS109/M855 62-grain ammo or MK262 77-grain ammo. It will also shoot cheaper 55-grain M193 for practice. The SIG550 series rifles have cold-hammer-forged barrels, which I believe add to their accuracy. SIG551-A1 barrels are also cold-hammer-forged, and the flash hider appears to be very close to that of the original Swiss rifles and carbines. The SIG551-A1 does not have the distinctive ball-like bulge found on the barrels of Swiss-made rifles.

Handguards on the SIG551-A1 have the same comfortable feel as those on other SIG550 series rifles. The rubber-coated cocking handle is also used on the SIG551-A1. For purists, the SIG551-A1 has the mounting point for a bayonet lug. Since I brought a SIG550 bayonet back from Switzerland some years ago, I plan to get the lug and mount it.

I find the combination of the grey finish for the SIG551-A1’s receiver with black furniture very handsome. I was shooting from a position in the shadows when testing the SIG551-A1 and found that it also offers pretty good camouflage. Summing up the SIG551-A1’s features—it’s a great combat carbine, just like the Swiss product that inspired it. 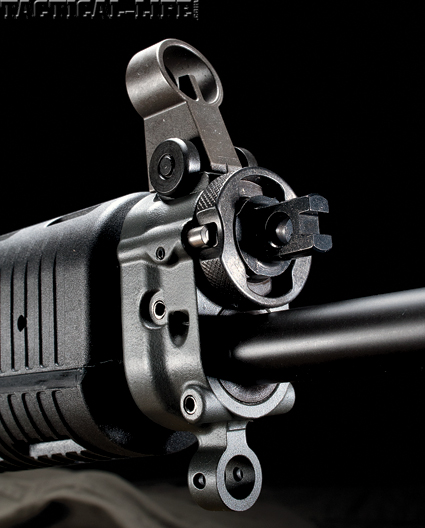 Just above the barrel, the gas regular knob has two positions—for normal conditions or when the rifle is fouled or in icy conditions. Sean Utley Photos

Smooth 551 Running
For the SIG551-A1, I decided to try Leupold’s new VX-R Patrol 1.25-4x20mm scope. The SIG551 is quick handling and I did not want an optic that would make it cumbersome. At 9.4 inches overall and only 11.5 ounces, the VX-R Patrol keeps my SIG551-A1 lively in the hands. Though compact, it offers a lot of scope, too. Its FireDot SPR reticle incorporates an illuminated central red dot surrounded by another circle. Crosshairs with stadia lines allow for hold-over or lead of a target. The illuminated center dot is controlled by a button on the side of the scope, which turns it on with a push and allows brightness to be increased or decreased. Holding the button in will turn off the scope, but it also has a motion sensor, which will turn it off if immobile for a certain period. As with other Leupold tactical scopes, the Patrol incorporates a light-gathering Index Matched Lens System.

I have now fired the SIG551-A1 in three different range sessions totaling 330 to 350 rounds. Accuracy has been excellent. I managed a couple of three-shot groups under an inch at 100 yards. Generally, however, I have been between 1 and 2 MOA with five-shot groups of 1.5 to 2 inches at 100 yards and 2.5 to 3.5 inches at 200 yards. I’ve fired 55-grain Guatemalan surplus ammo, U.S. GI 62-grain overrun ammo and Black Hills 77-grain ammo. Obviously, point of impact has been different as I zeroed the scope for 62-grain M855.

Accuracy has been aided by the SIG551-A1’s extremely good trigger pull and comfortable stock, as well as the very useful Leupold VX-R Patrol scope. Reliability has been 100 percent. Handling and ergonomics are excellent. I also did some shooting at 50-, 100- and 200-yard plates and found off-hand engagement from the low-ready position very smooth at 50 and 100 yards. Using 20-round magazines so I could go prone, I found engagement of the 200-yard plates effective.

I am very happy with the SIG551-A1. My other SIG550 series rifles are relegated to the safe, and this is my shooter. For those of us who have always wanted a SIG551 carbine, Sig has given us one in the SIG551-A1.