by Fred Pushies
in Guns
0

0
SHARES
0
VIEWS
Share on FacebookShare on Twitter
Made to precise tolerances, the SIG716 Patrol is an accurate big bore ready for critical missions. Built with an adjustable piston operating system, the SIG716 runs reliably, even in harsh environments.

The weapons industry has introduced a plethora of new rifles chambered in 7.62x51mm NATO (.308 Winchester) for military, law enforcement and civilians alike. Many are based on the AR platform, with guns running the gamut from designated marksman rifles to battle rifles and carbines. Now in production and making its way to the market is Sig Sauer’s SIG716 series of guns. The SIG716 is the larger sibling of the SIG516 in 5.56mm NATO, and I couldn’t wait to get my hands on it to see what it could do.

Sig Sauer is known for reliable handguns that are used by law enforcement, many of the government’s “lettered” agencies and the U.S. Navy SEALs. They also produce high-quality rifles. For “tactic-cool” folks, the SIG716 looks like an M4 on steroids, merging the familiar AR platform with the 7.62mm round’s punch. The rifle comes in a hard gun case with a cleaning kit, a manual, a gun lock, a Magpul PMAG, a sling fitted with a pair of quick-detach swivels and a set of Sig Sauer-designed front and rear folding sights. Out of the box, you’ll immediately notice the SIG716’s superb fit and finish, something you’d expect with a Sig Sauer weapon. The rifle is solid and leaves no room for doubt that you’ve surpassed the realm of 5.56mm weaponry. The base rifle weighs in at 9.3 pounds without a magazine. As with many of the piston rifles I’ve handled, it felt just a little bit nose-heavy; however, the rifle is well balanced overall. The SIG716 is available in black with black furniture, black with OD green furniture, and Flat Dark Earth with matching furniture. 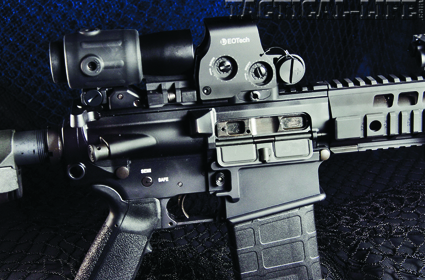 Specs At A Glance

The rifle is chambered for 7.62x51mm NATO and is compatible with .308 Win­chester ammunition. The receiver is mach­ined from a forging. This semi-automatic’s fire control selector is clearly marked with a “safe” or “semi” on both sides of the receiver, with a traditional 90-degree throw. The lower receiver also features an ambidextrous magazine release. The triggerguard can be opened by depressing a spring detent to facilitate trigger accessibility for a shooter wearing gloves. 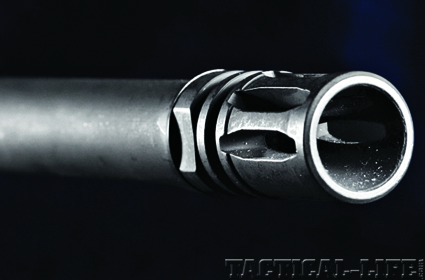 The SIG716 uses an ad­­­vanced short-stroke gas piston operating system. According to the company, “the short-stoke piston system provides for lighter recoil, a faster cyclic rate, and it does not negatively affect accuracy like a long-stroke system would.” With the short-stroke gas system expelling gas at the piston, you may be wondering if there are any issues with mounting tactical accessories like optics, lights, lasers, etc. over that position, but very little gas is released—most of it is used to operate the rifle.

At the front of the quad-rail forend, just above the barrel, the SIG716 gas adjustment valve has four positions: normal; adverse, for conditions when there may be fouling; suppressed, which is the setting for use with a sound suppressor (the partial gas cutoff allows the weapon to cycle); and off, which allows the rifle to function as a single-shot weapon. The 16-inch, free-floating, match-grade heavy barrel is chrome-lined with a 1-in-10-inch right-hand twist. The A2 birdcage flash suppressor is affixed to the muzzle end of the barrel via a 5/8-24-TPI thread pattern. This is the industry standard for 7.62mm NATO rifles, which allows the shooter to change or remove the muzzle brake as needed. 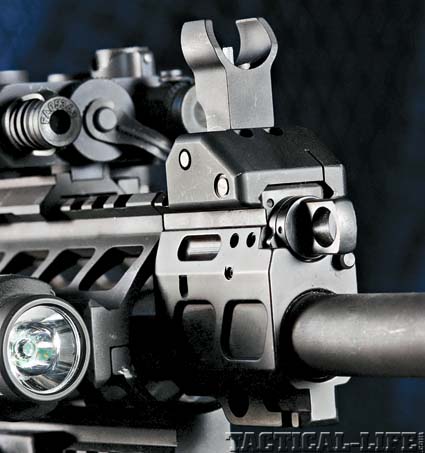 The rifle is equipped with a proprietary aluminum Mil-Std-1913 quad-rail handguard designed by Sig that matches up with the flattop upper for plenty of space to mount optics and sights. Each of the four rails is solid and provides a stable mount for tactical accessories, such as lights, laser aiming devices, night-vision devices, and other mission-dependent add-ons. There are also four quick-detach swivel attachment points on the forend itself—a set fore and aft on the left rail, and a matching set on the right side—adding to the rifle’s overall versatility.

While some manufacturers lately have chosen to leave bolt assists off their rifles, the SIG716 features one that functions well. This is an important attribute for a combat rifle that needs to function no matter what. The bolt itself has been designed to reduce weight and has cutouts machined into it for that purpose.

The SIG716 comes equipped with a Magpul ACS (Adaptable Carbine/Storage) mil-spec buttstock. Its sleek, anti-snag profile protects the release latch and prevents accidental activation. The ACS features a supplemental friction-lock system to minimize stock movement for improved weapon stability and accuracy. Located at the butt of the stock on the left and right sides are water-resistant battery storage tubes. The tubes are accessible from the rear via a tethered, hand-removable rubber plug. Each tube will store up to three CR123 lithium or two AA batteries. An integral storage compartment in the tail of the stock, which has a solid access door that locks up tight, gives the operator a choice of storage options.

The ACS comes standard with a 0.3-inch-thick rubber buttpad, which provides a positive shoulder-hold to prevent slippage. The stock is sloped and gives the shooter a positive cheekweld. It adds 9 inches to the upper receiver when collapsed, and 12 inches when extended. The stock’s design also provides the shooter with a good position for the support hand when shooting prone with a bipod or with other support.

The SIG716 is also fitted with the Magpul MIAD (MIssion ADaptable) Grip. This is an upgrade to the standard AR-15 pistol grip that fits my hand better and improves the ergonomics of the weapon. The grip has anti-slip texturing on both sides and on the rear backstrap for positive a grip. The grip also features a waterproof storage area. The front of the magazine well is serrated for those shooters who prefer to grip that area. 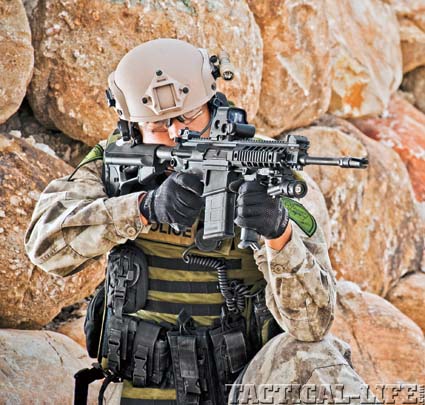 Along with the sturdy flattop upper receiver, the quad-rail forend provides plenty of space for mounting accessories like shooting optics, lights, or foregrips. John Hafner Photos

For backup sights, the SIG716 is eq­­­uipped with front and rear folding iron sights. Designed by Sig Sauer, these BUIS are similar in appearance to Troy or Midwest sights. The Mil-Std-1913 rails have T-markings that allow the shooter to reattach the sights or other accessories in exact positions. It should also be noted that the rifle is compatible with SR-25-type magazines and comes with one 20-round polymer Magpul PMAG. This alone is a marked selling point, providing the shooter with standard military-type magazines that are not proprietary—and they’re reasonably priced and readily available.

For a CQB sight, I chose the EOTech XPS3. It is powered by one CR123 battery that is fitted in a transverse position, unlike other EOTech sights. This configuration shortens the base of the sight and requires a mere 2.75 inches of real estate on the top Picatinny rail. The XPS3 is night-vision-capable and waterproof to one atmosphere. Target acquisition with the EOTech is extremely fast.

Behind the XPS3, I mounted the EOTech G23.FTS 3X magnifier with the Flip-To-Side mount. The G23.FTS magnifier allows a shooter to transition from CQB to medium range instantaneously while maintaining the accuracy of the weapon. It comes with a 7mm riser for raised sights. With the 3X magnifier firmly in place, a shooter definitely has the capability to reach out and touch someone.

For white light, I attached an EOTech/Insight WL1-AA tactical weapon light. Weighing just under 3.5 ounces, the WL1-AA is one of their latest offerings in weapon lights. Mounting it to the mil-spec quad-rail is effortless thanks to the Quick Release Rail-Grabber, which attaches to the rail without the use of any tools and only requires flipping a single lever. The robust LED of the WL1-AA is powered by two AA batteries, providing the operator a blinding 150-plus lumens for up to 90 minutes. The light can operate in momentary, strobe or constant-on modes.

The SIG716 is available with several finish options, like black with OD green furniture. Each rifle comes with one 20-round Magpul PMAG, and the platform accepts SR-25-type magazines.

I also attached the Laser Devices DBAL-I2 in the 12 o’clock position at the front of the top rail. This particular DBAL-I2 (Dual Beam Aiming Laser-Intelligent) was equipped with a Class IIIA visible red laser pointer and a Class I infrared laser pointer The DBAL-I2 allows a shooter to effortlessly transition from daylight operations to low-light operations.

For my last accessory, I added a Grip Pod, which is just that—a combination grip/bipod. The Grip Pod allows me to transition from an upright CQB position to prone and have a stable base for aimed firing in place before hitting the ground. With the simple push of a button, the Grip Pod’s legs instantly deploy. Weighing a scant 0.7 ounces, the GPS02 Military Model provides a solid connection and stable platform for steady shooting—up close or out far—with no wobble. The Grip Pod mounts to the quad-rail via a thumbscrew and does not have a quick-release option.

I spent the day at my local outdoor range running the rifle through its paces. Taking into account the weapon’s use as a patrol rifle and for an entry team, I zeroed the gun at 25 yards. Firing a variety of ammunition from basic to match grade, the rifle preformed flawlessly. Specifically, it was run with loads from Black Hills, Federal, Remington and Winchester. No matter the load, the SIG716 easily fed rounds and produced accurate shot groups. Though it was not the fastest chronographed load, the SIG716 punched the smallest group with Black Hills’ Gold 180-grain cartridge tipped with a Nosler AccuBond bullet, creating a six-shot group of only 0.29 inches. The rifle comes with a factory trigger pull of 7.6 pounds, which I found crisp and predictable, and I consider this one of the attributes that led to the tight clusters exhibited with all the ammunition tested. I shot the weapon with an assortment of magazines, including PMAGs and KAC’s SR-25 magazines, and the rifle operated flawlessly with both.

Interestingly, the first SIG716 prototypes were designed to take modified M14 mags. But Sig Sauer listened to shooters and redesigned the SIG716 to take the PMAG/SR-25-style magazines when it went into full production. In the end, the SIG716 Patrol is “good to go” right out of the case—there’s no need to purchase a lot of add-ons like rails, sling mounts, an ambidextrous magazine release, and so forth. With many agencies currently carrying Sig Sauer pistols, it would not be surprising to find the SIG716 Patrol rifle in their armories soon.